I’m actually hopeful for Snowden now. The tide of public opinion is swaying even more strongly in his favor and the government may find itself having to pardon him just to save face.

On the other hand, lots of top government officials are still pissed over what he’s doing, and will twist arms to make sure Snowden never sees American soil again. You see this with retired officials that are allowed to speak their mind and generally wish he would die as painfully as possible right now.

If Congress can retroactively immunize AT&T and friends, we can do the same for Edward Snowden.

I support him. He is a real patriot.

Nope, Snowden is not a billion dollar company nor is he a campaign donor. Totally different thing. He is a mere human citizen, not worthy of any consideration unless somehow the government is forced to toss the peons a bone.

I’m actually astonished that he’s still alive. I suspect that there’s an inter-agency rivalry going on between the NSA and whatever agency would be responsible for liquidating him.

He’s too high profile to just kill off right now. That would make him a martyr and further cement his place in history. Chelsea Manning probably has more to worry about.

It’s a crack in the armor. The elite, moneyed interests who use fear and misinformation as a means to coerce complacency are no longer quite as united as they once were, it seems. To see the NYT standing up with integrity is appealing, and because they’re kind-of-insiders, their voice is going to carry far. Good. Good for them. Good for us. Good for Snowden.

I’m actually astonished that he’s still alive. I suspect that there’s an inter-agency rivalry going on between the NSA and whatever agency would be responsible for liquidating him.

I dunno, if I was someone in charge at one of the TLAs, I’d be tripping over myself making sure that Snowden remained safe and well until/unless he could be brought back for trial. Getting assassinated is about the only thing that could give him more credibility than he already has, and it wouldn’t do a thing to stop the revelations.

As much as I’m favorably surprised that the NYT would stop licking boots for a moment, ‘clemency’ is a backhanded insult.

You extend ‘clemency’ to a guilty party who deserves punishment, out of mercy or consideration on your part. Snowden doesn’t deserve ‘clemency’. He’d have to be a wrongdoer to do so. What the NYT practically says; but apparently isn’t willing to admit, is that he isn’t ‘a guilty guy; but he did some useful stuff so let’s cut him some slack’. He’s a hero and a patriot. The hell with ‘clemency’(Who would they find to pretend to represent ‘rule of law’ sufficiently convincingly to pardon him with a straight face, anyway?).

He deserves a triumphant reception and the downfall of his enemies, not ‘oh, we’ll give him the lenient criminal workover…’

In short order someone will counterpoint with the suggestion of a hanging, and Obama will pretend the NYT piece never happened.

It may be that the elite moneyed interests have only just become aware that the NSA is listening to their cell phone calls and emails as well.

They’ve offended elites too. That’s why this is different than other whistle blowing incidents.

I hope so. Plus they seem to wake up to the fact that it hurts business (Well, some of them. Certainly cloud based services.) 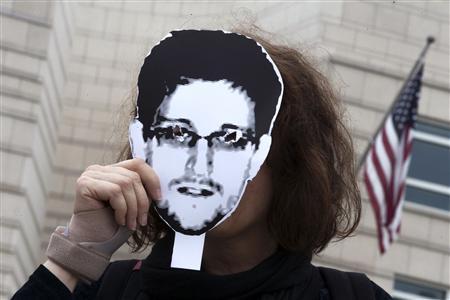 Snowden is a freaking champion and I want to high-five the guy with every new revelation. He’s no fool.

A plea bargain - what a fine idea! No prosecutor has ever reneged on one of those.

He’s won. Glad to have one for our side after the terrorists seemed to be winning the war on American values.