O.J. Simpson granted parole, could be out in October

This truly great news! Now OJ can return to his life’s work, touring every golf course in the United States, looking for his wife’s murderer. Good luck, and godspeed, OJ!

I still think him being a celebrity and the spectacle was the main reason for the attention it got.

Then you just might be in denial, due your own privilege; sorry. (I know that must suck to hear even after you marginally acknowledged my points, but the bias is real… even among intrinsically good people.)

Celebrity was the lesser reason that crime and the following trial was such a spectacle.

Look at it this way: if a black guy killed a white woman in LA, you’d definitely hear about and there’d be an uproar. I probably would not hear about it in Texas. Certainly not in Japan. And certainly not continuously for the next 9 months.

Sure, people care more about a white girl than a black girl as victim. That much is well established. But OJs fame and the contrast between the gruesomeness of the crime and his wholesome reputation completely dominate the story. 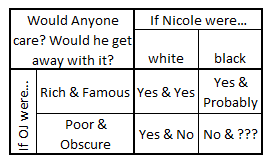 I would personally argue that in the table above, if the circumstances were similar except for wealth and fame, then they’d have nailed OJ to a wall. And if instead OJ were as he ever was, but Nicole had been black, it would have ended much the same. It wasn’t the Nicole Brown murder trial, it was the OJ Simpson Trial.

The question I have to wonder is if Nicole Simpson had been the same color, as OJ would anyone who is so enraged (then or now) care?

I don’t think there’s any question that the media pays exponentially more attention to violence against white women. In America, racism sells even more than sex. 'Tis a fucked up country.

I’m sort of amazed anyone would suggest race isn’t a factor. Even if you don’t think it is generally, the media so blatantly made it about race that it’s incontrovertible.

There’s no way it would have been as controversial.

Agreed. We certainly wouldn’t still be talking about it 20 years later.

In America, racism sells even more than sex. 'Tis a fucked up country.

I’m sort of amazed anyone would suggest race isn’t a factor. Even if you don’t think it is generally, the media so blatantly made it about race that it’s incontrovertible.

Denial is a helluva drug; otherwise people might have to face the reality that no one is 100% ‘one of the good guys,’ and we all have fucked up aspects to our individual characters. That’s the occupational hazard of being human.

But OJs fame and the contrast between the gruesomeness of the crime and his wholesome reputation completely dominate the story.

Sure, he was “one of the good ones,” in the eyes of many bigots… until he suddenly wasn’t. That made many of them feel personally betrayed, methinks; and again, that plays into the whole ‘deification of male athletes.’

You do know that she didn’t mean or say that his fame wasn’t a factor? No one is saying that or that it did not impact public perceptions, because of course it did.

We’re saying that if Nicole Simpson had been a black woman and he’d still gotten off, white people would not have lost their minds over it, as if it was LITERALLY the biggest miscarriage of history ever. Too many white people seem too overly concerned that in the entire fucking history of America, ONE BLACK DUDE might have got away with murder… as if thousands upon thousands upon thousands of white dudes have a long ass history of raping and murdering black women and everyone thinking that pretty much up to the 1960s, IT WAS JUST ACES! That doesn’t even begin to get to the history of mass incarceration that is part and parcel of our DAILY LIVES right now.

You do know that she didn’t mean or say that his fame wasn’t a factor? No one is saying that or that it did not impact public perceptions, because of course it did.

We’re saying that if Nicole Simpson had been a black woman and he’d still gotten off, white people would not have lost their minds over it, as if it was LITERALLY the biggest miscarriage of history ever.

My reading of it was the claim that the whole things was a media circus because it was a black man murdering a white woman, and that OJ’s fame was – as @Melizmatic put it – only a “lesser reason [it] was such a spectacle.”

My point is that doesn’t really jibe with of the coverage or conversations I experiences at the time. The circus was about the famous OJ Simpson being on trial for surprisingly gruesome murder.

Speaking of how much more white America cares about the death of one pretty white person than the deaths of a lot of black people: 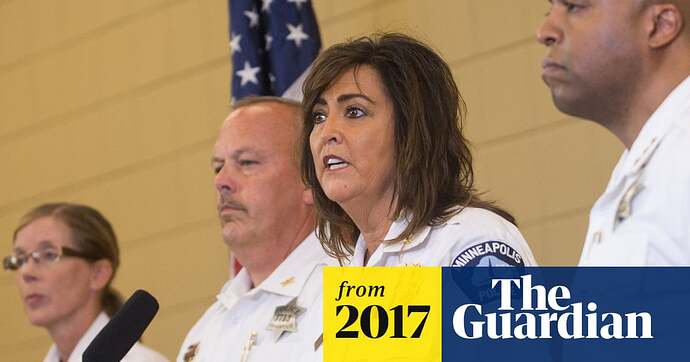 Janeé Harteau has ‘lost the confidence of the people’ says mayor Betsy Hodges, who in turn faces calls to resign at chaotic media conference

My point is that doesn’t really jibe with of the coverage or conversations I experiences at the time.

But here’s the thing; your particular experience is not the ‘end all-be all.’

Consider my country’s history when it comes to Black men being involved with White women; from the time of slavery and Jim Crow, when countless Black men were lynched just because ‘someone heard’ that they had even look dared look at a White woman.

Consider that Emmett Till was basically just a child when he was brutally beaten, lynched and murdered in 1955 for allegedly “flirting” with one, to the point that his corpse was completely unrecognizable. 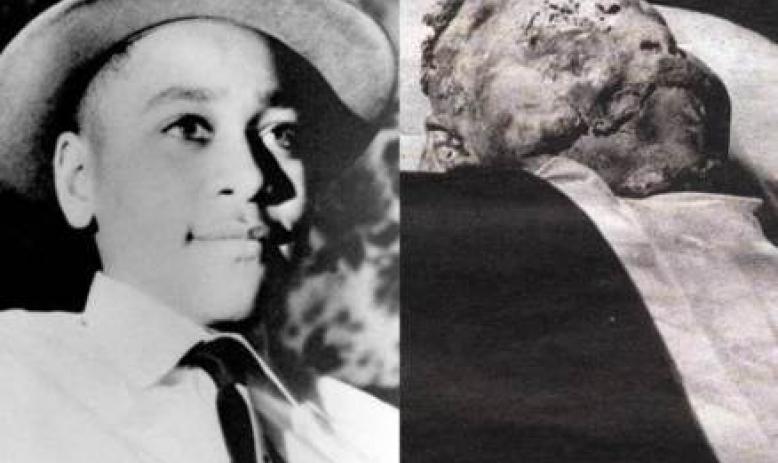 Now fast forward only 40 years to a Black man that was able to transcend his inherent ‘caste’ because he was soooo good at football, and he made a lot of money.

He was likeable and famous, and most important, non-threatening.
Then he married ‘above his caste’ and it was tolerated because fame + football + money.

But then he went and “bit the hand that feeds him;” likely killing his ex and her boyfriend in a fit of jealous rage… and the media lost it’s shit… not because the act was obviously reprehensible in and of itself, but because the victims were White, and the assailant was Black. There was blood in the water, and they were like sharks draw to a feeding frenzy.

I have to look askance at anyone who truly believes the overreaction on the part of the media and the public at large would have been ‘just the same’ if Brown-Simpson and Goldman had been people of color; history and the present scream otherwise.

That may not be your perception “of the time”, but it’s my perception from my entire existence, spent observing just how little importance is placed on the lives and well being of people of color… and that perception is shared by countless other people from all walks of life.

OJ was hardly the first (or last) celebrity murderer, but the only person who raises the same kind of circus and outrage is Charlie Manson.

And honestly, if Manson were any less obviously an unrepentant psycho, he probably wouldn’t have even been noticed.

Which is to say that a garden-variety domestic murder somehow got elevated to the status of “cult-leading, race-war preaching spree murder.” What made OJ’s crime so heinous as to become that level of circus-ry?

Nah, can’t think of anything.*

*This is sarcasm, in case anyone can’t tell. Not the whole post, just that one line.

I think one of the things that made Manson such a spectacle is not only were the victims also attractive, affluent White people, but also because he never actually killed anyone himself; he talked a bunch of other people into doing it for him of their own volition.

That on top of all the batshit crazy, and you got yourself a story that people will be talking about for years to come.

I know you speak fluent sarcasm.

Unfortunately, there are some other people who would take that at face value.

As another comparison, Phil Spector. Celebrity murder, bizarre, 24hr news cycle well established… We heard about it, but nowhere near OJ levels. Hell, I heard more about OJ’s armed robbery than Spector.

Again, I wonder why.*

But American law enforcement doesn’t have a racism problem. /s

history and the present scream otherwise.

Can’t let a preponderance of evidence get in the way of ignoring how the world is. sigh

That it was O.J. is what blew everyone away, not the fact that a white lady was killed.

I very, very, very strongly disagree with your assertion.

If he were not OJ Simpson he’d have been dead long before the end of that car chase.

My point is that doesn’t really jibe with of the coverage or conversations I experiences at the time.

That’s the problem, though. The press wasn’t going to say it was because of race, but that doesn’t mean that race didn’t play a role or that we shouldn’t attend to that. I do think that there would have been some pretty heavy coverage if his wife had been black, because he was a famous dude - other celebrities who murdered people get some pretty spectacular treatment. But I doubt people would STILL be talking about how OJ got away with it, if his wife had been black. White American would be like…

Also… listen to @Melz2. the relationship between black America, the mainstream press, and the white consuming public is a complicated one and I think it does us well to remember that.