Watch: "Sickened" Jim Carrey has strong reaction to Will Smith's slap at the Oscars

Originally published at: Watch: "Sickened" Jim Carrey has strong reaction to Will Smith's slap at the Oscars | Boing Boing

Another thread on this Slap of the Century??

@Acyn
Bedingfield is asked about Chris Rock and if the White House is doing anything to support comedians being attacked… https://t.co/I4CJEA9ERR

Circus without any bread.

Says a guy whose anti-vax comments have probably caused the deaths of children. Sit down, Jim. Smith was wrong. Rock was wrong. And you don’t deserve a say.

That reporter may have meant that to be funny. Either way, sad that it fell flat.

I’ll circle the date on my calendar.

17 Famous Co-Stars Who Had Knock-Down, Drag-Out Fights On Set

You probably have no idea these celebrities hate each other.

“Academy Award winners Joan Crawford and Bette Davis were huge stars in the '30s '40s, and '50s who despised each other. There were many reasons for their rivalry, including jealousy over a man (actor Franchot Tone) and many attempts to undermine each other’s careers.

Despite their decades-long feud, they signed on to co-star in 1962’s Whatever Happened to Baby Jane? While shooting a scene where Davis’s character beats Crawford’s, Davis was reported to have hit Crawford so hard that she needed stitches.“

20 Co-Stars Who Physically Fought Each Other On Set

Verbal fights are one thing, but some co-stars get into full-fledged physical altercations.

“ Jim Carrey has often claimed he was “possessed” by the spirit of Andy Kaufman while making Man On the Moon . Part of the movie recreates Kaufman’s infamous feud with pro wrestler Jerry “The King” Lawler who played himself. Just like the real Kaufman, Carrey took the whole thing for real. He insisted on taking Lawler’s piledriver and threw a fit when they refused to let him do it. He also spat on and slapped Lawler between takes. Lawler handled it well, but was taken aback by Carrey going too over the top even by pro wrestling standards.”

“(Richard) Pryor smashed a chair over Kotto’s head when he felt the man was upstaging him. He also got into a wrestling match with Keitel. He even pulled a gun on director Paul Schrader”

Since it lives on - Michael Harriot’s take:

Last week, my friend Sammy was remodeling my home when he interrupted his coworkers' work to tell them the origin story of our friendship.

Seriously. Even if someone has something new to say… it’s kinda insane how this has become such a huge thing that people can’t stop talking about. I mean yeah it was kinda nuts but,…( oh jeez here I’m catching myself doing it too) It’s one of those “everybody has an opinion” moments for social media. An ongoing war or congressional budget or the Supreme Court or any number of things are gonna effect everyone’s lives way more than this, but this somehow is more engaging. Maybe BECAUSE it doesn’t directly effect most of our lives it’s more fun to armchair quarterback this thing… (not me personally having fun. But seems like everyone else is since the second it happened)

This is a good one, too… 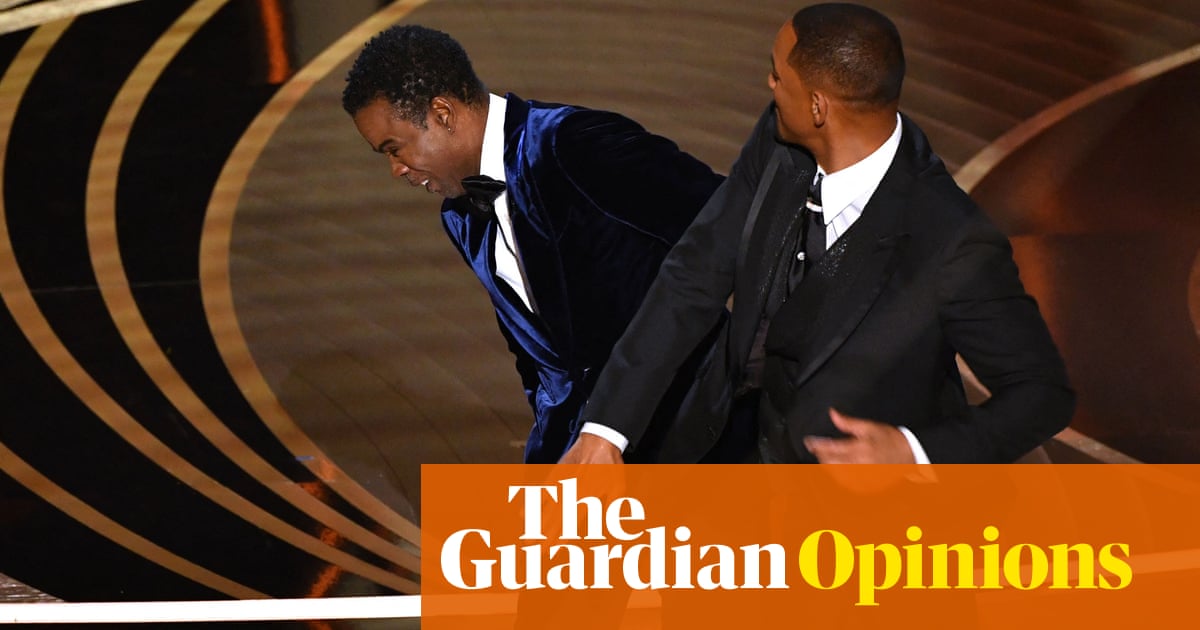 White outrage about Will Smith’s slap is rooted in anti-Blackness. It’s...

This kind of performative pearl-clutching is only ever reserved for Black men who mess up, says Guardian US writer Tayo Bero

And from the Atlantic, which I have not gotten to read yet…

, please stop this inane free PR for these two fucking idiots, fuck them both! Fucking Enough!

Jim will be happy to sell his paintings for Ukrainian benefit right? Right?

Despite their decades-long feud, they signed on to co-star in 1962’s Whatever Happened to Baby Jane?

Didn’t Crawford also put weights in her pockets for the scene where Davis had to carry her down the stairs, and Davis put her back out?

For the record, unless reports and clear videos come out from all news channels about Smith, Rock, Carrey, and the entire Academy being simultaneously beamed aboard some alien spacecraft, I won’t be posting or seeking out anything re any of the subjects.

It is challenging and redefining what we want out of society.

Society was moving to an (unlikely)ideal where assault and victim blaming were concrete no excuses, any nuance and alternative views were dismissed… “zero tolerance”.

Now this issue is testing those social norms as we are being asked to consider the severity of the assault, what is a victim, what was said leading up to the assault, along with many other variables that have been argued.

You know, that insult is gonna last a very long time.

Um…you’re talking about the one Chris made, right?

All criminal prosecutions and assessments of guilt consider factors that may have contributed to that crime or action. This isn’t a unique factor here.

I think you’re confusing whether people think this incident deserves this much coverage with their endorsing the assault. And with thinking that there may be mitigating factors that attenuate - but don’t eliminate- culpability.

No one is questioning the victims version of events, that’s a red herring.

None of us really knows the entire history of interactions between these people leading to this. We just know that there is a history.

A guy got slapped on the teevee two days ago. He wasn’t injured, he didn’t press charges and reports are that the two guys spoke and put this aside.

This story only has legs because celebrities were involved. That and that they were black guys.

Society was moving to an (unlikely) ideal where assault and victim blaming were concrete no excuses, any nuance and alternative views were dismissed… “zero tolerance”.

No, I think that we would notice such a societal shift. As far as I am aware, rape victims are still subjected to endless questions about what they were wearing or how much they had to drink, etc.

Now this issue is testing those social norms as we are being asked to consider the severity of the assault, what is a victim, what was said leading up to the assault, along with many other variables that have been argued.

No, this is still quite common whenever incidents of this nature occur. It was all anyone talked about during the Kyle Rittenhouse trial.

For what it’s worth, I do not think that it is useful to view this particular incident as a microcosm of society. This is being widely discussed because these people are very famous, and this happened at a very high-profile event. It is not being discussed because it is a good case study on the state of our society, which is actually quite far removed from the rich and famous.