Obama asked reporters to do the numbers on terrorism vs. gun violence. And they did

Yeah, I heard that story in July, and also heard it when Congress did the same thing the year before that, and the year before. However, the raw stats - that is, what the PRC used for the report I linked, which includes the National Violent Death Reporting System mentioned in your link - are still being collected. That PRC report came out in 2013, and what was available to work work with while they were working on it only covered up until 2011. So the PRC could come out with an updated version of the 2013 report if they chose, and the sneaky Congressional action that PRI is reporting on doesn’t prevent it.

So does this mean Obama will now do away with the TSA, DHS, NSA domestic spying, etc?

I am obviously exaggerating. They agree on that and that it would be great if we can reduce the number of gun related deaths. But that’s where it ends, no?

I don’t understand it, and I certainly don’t know what to do about it, but there are people out there who think like this.

Rage and alienation at the world. A lot of us have felt it.

It depends who is deciding who is a terrorist.

According to the US government, any male between 12 and 40 in the wrong region.

That would definitely be a interesting infograph, however I would also (if possible) like to see it not just limited to “killed citizens of other countries” or “killed U.S. citizens” but also to include those who have been injured or maimed by terrorists or “U.S. Anti-Terrorism shenanigans”. So if the data for this chart were ever compiled I would like to see the cancers, birth defects, and long term disability caused by the U.S. Military’s use of DU munitions in Iraq listed, and of course the injuries and deaths caused in U.S. drone strikes and airstrikes that have mistakenly, or purposely, hit civilian targets, like this recent example.

So does this mean Obama will now do away with the TSA, DHS, NSA domestic spying, etc?

No president is going to do these things voluntarily. We have a corrupt system.

I totally don’t get the sentiment of taking people with you. I am not an advocate of suicide in most situations, but I am not sure it is my right to make that decision for others. But harming innocent people is pure evil. There is something that I just cannot understand about someone who would kill children in a school. That cannot be depression, it has to be some kind of antisocial rage.

I really wish that there was some organization that could look fairly at the available data, and use that information to come up with realistic solutions. The ones that want to ban all the guns always massage the data to inflate the numbers. The pro-gun organizations do the same, but in the opposite direction. Any centrist movement seems to quickly get pulled to one extreme or the other. So we get two sides, and they are both fudging the facts to make their point. The inclusion of suicides bothers me. Suicide is bad in most instances, and it is a life lost, but your using a handgun to commit suicide in your home does not endanger my family in any way. And there ought to be a way to separate urban gang violence from that which affects the rest of the population. Most Americans have no interaction at all with gang members. There ought to be a way to disarm violent gang members in a way that does not result in seizing guns from rural people who are not part of the problem. I do not have those solutions. Just more questions.

Shockingly even when someone is flagged, they still can openly purchase weapons, and then turn them on society. 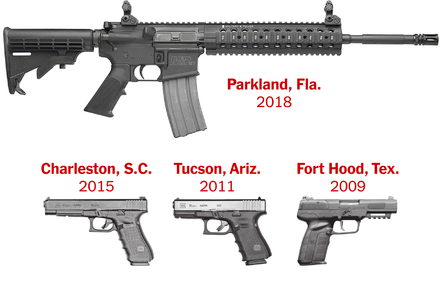 How They Got Their Guns

A vast majority of guns used in 19 recent mass shootings were bought legally and with a federal background check.

I have to google heavily for it (I will) but it came down to … if you excluded certain inner cities (I forget the definition or criteria, but think Chicago, Baltimore, Newark NJ) and suicides, the gun problem wasn’t much of one. Well, it was one - but along the lines of other developed nations that people here say “why can’t we be more like ______________”. I’ll have to find it.

Yeah! That’s the ticket! If you don’t count all the gun deaths and then there are no more gun deaths!

LOL well I’m just saying I read it, not that I authored or sponsored the dang thing!

But … It gives some insight into what to do first.

Repeal the 2nd amendment. That’s what you do first. Remove the RIGHT to own killing machines and make people prove they can be responsible with them.

It’s actually hiding an important point. If a citizen doesn’t own a gun, doesn’t use a gun, doesn’t hunt, and doesn’t associate with people with guns (such as be a gang member, police, or indulge in armed crime), then the chances of them being shot (by themselves, by others or by accident) are probably pretty small, even in the US. Murders of innocents with guns get a lot of press, possibly leading to a misconception regarding the true rates and risks.

The payback in terms of protecting your own life by worrying about other people with guns might be pretty poor. You’d likely be better off spending your time eating healthy, getting exercise, driving less than spend it fretting over gun control.

It’s actually hiding an important point. If a citizen doesn’t own a gun, doesn’t use a gun, doesn’t hunt, and doesn’t associate with people with guns (such as be a gang member, police, or indulge in armed crime), then the chances of them being shot (by themselves, by others or by accident) are probably pretty small, even in the US.

I have to google heavily for it (I will) but it came down to … if you excluded certain inner cities (I forget the definition or criteria, but think Chicago, Baltimore, Newark NJ)

(Edit: apparently, a hashtag is markup code for big black bolted words. I’ll leave it as is. )

Yes, that seems to be the case. But in other parts of the civilized world, the chances of being an innocent victim of gun crimes is really, really small. 5 or 10 times (ratio to say Canada or Australia) a very small number is still very small.