I think you meant “Watson”

So, I’m replacing a terrible over-the-range microwave with an actual exhaust fume hood for our kitchen, and both this video, and wirecutter’s reviews of microwaves, showed how standardized microwaves have become - almost all of them come from the same factory! Only Panasonic really makes bespoke microwaves anymore, and that may not be a good thing - because microwave directions for food generally assume you have the homogenous one now.

'arf-a-tick… are those real buttons like which push in a bit? (as opposed to membrane keys which have to beep to let you know you might’ve hit one or two of them with a greasy forefinger) oh man, thems were the days. (“Bring back levers! dials! slides!”)

Dot matrix displays! DOZENS of options! Built-in recipies for Blue Jigglies, whatever the fuck they are! Popcorn buttons that work, and why!

Eh. I still kind of miss my family’s first microwave, purchased in the early 80s and serving reliably for decades. It had a physical knob you’d turn to turn the thing on for a specified time (I think up to 8 minutes) and the door release button. That was it. Easiest learning curve ever.

It even survived that one time when a young @Otherbrother tried to use it to dry glue on a craft project and set the thing on fire.

I was similarly puzzled… I thought, is this meant as a dig at Alec’s hairstyle or something?

I think you meant “Watson”

TIL his last name is Watson! I thought it was “Connectify”.

(Last time I went microwave shopping was at Sears, so you know it wasn’t terribly recent.) The oven I chose had a display that was set back a full centimeter from the front panel. I set it on the kitchen counter, and discovered the deeply recessed numbers ensured that I couldn’t read the display while standing right in front of it! I’m of average height, the countertops are at standard kitchen height, but I had to bend over like Gollum to read the darn thing.

I’m always surprised (and very disappointed) to find a commercial product that has been delivered to stores that has obviously never received a single second of usability testing. And it seems to be happening more frequently, rather than less frequently. (Samsung, I’m looking directly at you and your User-Hostility Department.)

I couldn’t find his name and was in a hurry!

Bespoke? Great, I look forward to ordering one with a psychedelic exterior finish, button tufted leather interior, and some suitably steampunk guages and buttons.

Eh. I still kind of miss my family’s first microwave,

Ours is from Goodwill and almost as simple. It has a knob to select thaw, low, medium or high, and another knob for the time. And a door release button that is quite rewarding to push. It’s perfect.

Nothing like a fire, but as a kid we got this microwave egg poacher thing. It was a plastic dish with two hollows for a touch of water and the eggs, and a top that slid on. One time I didn’t poke the yolks enough and it blew up, broke the top inside casing of the microwave!

My kingdom for a door release button and physical controls. The new-ish model we got installed in our apartment (when the previous similar model’s membrane keys stopped responding) has just a door handle you pull, and of course is held together with cheesy plastic hooks so about a month ago the entire door just pulled itself apart and the glass with the the faraday mesh slides down every time you open it. Being the over-range model, it’s screwed to the cabinets so will be quite obnoxious to replace. We’ve been just…doing without rather than getting irradiated several times a day. I might try to replace just the door if I can find one.

I had to eventually ditch a 40-year-old model that had a great set of controls - and was a bit quirky.

Power level 1 to 10
Time set in seconds on the same 1-10 keypad - each press entered in the right hand end and next press pushed it left. This meant I could set it for ANY number of seconds up to 99, but once you set a third press which took it to minutes it reverted to there only being up to 59 seconds max per minute.

Specifically wanted a replacement with no recipes, pre-canned timings, settings etc - they do not exist except for one which had rotary knobs for time and could only be set in 10 second increments up to 30 secs and then 30 sec increments and so on. Not granular enough.

And the showrooms NEVER allow them to be plugged in so you can’t tell exactly how they operate. And the product descriptions online are minimal and treat users like idiots.

Eventually found one that had 5 power settings, some defrost and other settings I was happy to ignore, and a rotary timer knob. I called them (Panasonic) on their customer care line and specifically asked ‘can I set any time I like in one second increments with this dial’
‘No’ they said, it is 10-second increments. It was the simplest model closest to what I wanted so I bought it. They lied. 10 second increments up to thirty seconds and then 30-second increments, only.

Microwave manufacturers are a bunch of tossers. Most models in a range are differentiated by trivially minor differences, and nobody actually makes a straightforward basic model.

They should do toasters next. Just like Apple puts all the incompetents they can’t fire on mouse design, appliance companies put theirs into the toaster divisions.

I mean, no because you can’t clean them, but yes. And the button tufted leather interior. Set it to -carrot sliders- and punch for maybe 77 seconds. Then program in up to 40 subsequent steps for a lavish lunch involving rolled lavosh and blanched freshwater fish with coriander and lavender. 2023 is coming and the thing should sing my offshore turbine powered lunch to me.

It should also do NMR without requiring liquid gas inlets.

They should do toasters next. Just like Apple puts all the incompetents they can’t fire on mouse design, appliance companies put theirs into the toaster divisions.

There’s certainly a lot of crappy over-designed ones out there, but aren’t there still a decent number of models available that have simple controls that consist of a knob and a lever?

Whatever the controls, most modern ones suck on all levels, far exceeding the normal low expectations of planned obsolescence. I paid a premium for a toaster oven with good reviews that indicated it was easy to use and wouldn’t crap out after a few years.

+1 for real buttons , and a demand for back-lit buttons.

Even better, I would love to see a Pi/Arduino-based keypad interface that can replace the crap I have on mine. When finished, it beeps every 30 seconds until you open the door… aurrrggggg…

Someone in my house puts stickers over the buttons that show meats because they can’t stand to look at the icons used to represent those items. In fact, that was THE criteria used in picking our newest microwave. once home it was apparent the whole thing was a piece of shit. aurrrggg…

I just don’t get why these things have probably the worst human interfaces for appliances.

aren’t there still a decent number of models available that have simple controls that consist of a knob and a lever? 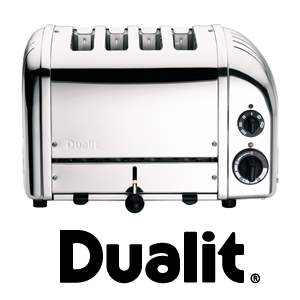 Dualit is the home of toasters, with a model to meet every need, whether domestic or commercial.

And most of the parts are replaceable - we’ve had two sets of elements on ours, which we’ve had for longer than I can remember. Classic design, does not change because it does not need to be changed.

You’re in luck! He has basically the most amazing (antique!) toaster ever.

edit: on topic, I do like most microwaves nowadays where you can hit any low digit for that many minutes, and/or hit a button to add 30 seconds. Of course, they’ve managed to mess even that up too often with weird press-once-and-wait numbers that don’t start if you press them at the wrong time or if you get tired of waiting and try pressing them again, or modal 30 second buttons that don’t function if you start the time by any other means.