It used to be fun to buy that sort of thing at The Black Hole in Los Alamos. We have all sorts of crap from there. It is very likely that the engineer just hated to see it all go into dumpsters.

This wasn’t all inside of a safe, was it?

Then there’s one of our technicians (supporting a NASA program) whose cache of ‘borrowed’ items were discovered hidden under the flooring panels in his work area, a 20’ by 4’ hidey-hole filled — FILLED! — with PC monitors (that’s right… plural), toasters (WTF?), soldering irons, and various assorted booty. That and a history of strangely insubordinate behavior and weird infractions amounted to nothing; he’s in the union.

My basement used to be like this; the accountants where I worked kept writing off my spares so I had to get them off premises ( actually, “in the dumpster” was the phrase they used

) . For a while I had a functional PDP 11/44 on my front porch (couldn’t get it into the basement) and some beautiful Kennedy tape drives in the living room. This old equipment is a good source for small hardware, gears, motors, and misc slabs of metal, would not be too surprised if that was why he had this stuff. That doesn’t explain the mag tapes, though, don’t know of any other use for those.

That’s okay, I saw that on TV once.

That doesn’t explain the mag tapes, though, don’t know of any other use for those.

They have the original version of SPACWR on them, of course.

That doesn’t explain the mag tapes, though, don’t know of any other use for those.

You spend your career caring for these things, its hard to just chuck them away once there is no use for them. I have a DEC 3000 alphaserver in my study. I bought it from my employer, and it had previously been part of the Australian ATC system. It runs netbsd perfectly fine but its useless to me now that a raspberry pi is $20 and runs on 200mA. I just can’t bring myself to throw it in the rubbish.

Control Data, as in Control Data Institute?
Can a phone call change your life? This one quite possibly could.

Now that one got me laughing out loud! 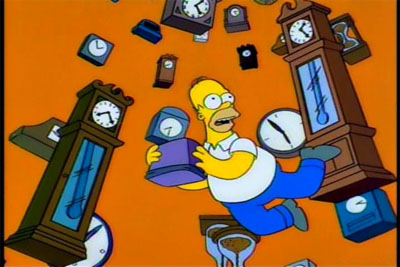 Those are some mighty fine boat anchors.

He was saving up for a real life re-enactment of his favorite screensaver.

One space agency’s trash is another maker’s treasure…

Oh, man, you have no idea… Some of the items in these photos are marked Goddard Space Flight Center, where I work (as a contractor). We just had a send-off for a fellow who had worked there since the Apollo era, just a few months shy of 50 years. In the few years that I worked with him, he was very anxious about the national debt and refused to throw anything away, even when he was specifically instructed to do so, just in case NASA could use it again.

The end result is that, a couple weeks later, we’re still finding random crap (connectors, pieces of cable, screws, metal plates etc.) squirreled away where they were not supposed to be (e.g. under floorboards, on top of air ducts). And since he was doing this on the sly, when the parts were actually usable, we didn’t find out that we still had them until now.

I have no idea what he might have snuck home, but technically nothing is supposed to leave the center without a property pass. I suppose they have some way of selling off (or giving away) surplus that isn’t simply scrapped, but I’m certain it would involve some sort of receipt. I know (second-hand) of someone who was actually busted with nothing more than a bale of old wires in the trunk of his car.

As for this article, I have no idea how things may have differed 45-50 years ago.

That and a history of strangely insubordinate behavior and weird infractions amounted to nothing; he’s in the union

Oh gracious, thats creepy: I presume we are talking about two different individuals, but your post very closely describes my former coworker. Ultimately, though, not even the union saved him; his position was finally eliminated.

Good news, no matter how moldy the tape, if it’s under 1600 bpi you can read it with a sight glass. Not that you’d want to do that to your eyes, but it is possible.

Probably just by dropping little bits of metal on the tape and looking at the patterns they make.

Looks like equipment from the old NCCS mainframes in Building 23 during the 80’s. Old friends. (I was one of the systems programmers there - Building 3/14, Building 1, Building 23, and Building 8. Hung on until we went to Unix with the Cray, and then switched over to web dev work.)