One small step for a robot, one giant leap for robotkind

Another incredible achievement from Boston Dynamics that could have been accomplished much more easily and efficiently with a treaded vehicle.

Still cool though. Impractical, but cool.

Well, if the programming is combined to allow for balancing across difficult terrain, climbing ladders, performing simple human user interface interactions, and going up or down stairs then you have something pretty impressive - which this is a step towards.

Mind you, for the functions this serves a remote controlled drone is probably universally better.

The only real reason to give a robot humanoid form is if you need it to interact with an environment built for humans. Even then you can usually get away with a torso on treads.

But hey, I get the basic human desire to develop a full-fledged android. Nobody dreams of going to Westworld to fuck Johnny 5. (You can do that already if you’re so inclined)

Yes: It just occurred to me that we may never need this, as every application this can be put to, can be performed more efficiently by simpler technologies, like the wheel or a tread.
What exactly is the end goal here? Android servitors? Android soldiers?
Robot replacement bodies for the ill?

How does this compare with the difficulty to walk efficiently on less complex terrain? Humans are pretty good at walking at an efficient gait across terrain where we don’t have to even look down to see every step. Most of our leg motion when walking is a natural pendulum back and forth underneath of our bodies.

That’s why I said “drones” - you either have treaded or flying drones depending on the need and apply the correct tool (i.e. the efficient one) for the job instead of trying to create a generic tool that is inevitably less efficient at everything and much more expensive.

The work needs to be done, and it will help drive understanding human physiology as well as drive many complex technological improvements. I’m just saying it’s a big step forward and should continue, even if it’s a vain effort for current practical applications.

Robot replacement bodies for the ill?

Scalzi got you covered: 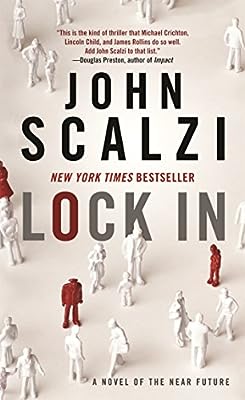 A blazingly inventive near-future thriller from the best-selling, Hugo Award-winning John Scalzi. Not too long from today, a new, highly contagious virus makes its way across the globe. Most who get s ...

Most of our leg motion when walking is a natural pendulum back and forth underneath of our bodies.

You think that, because you do it automatically, but it’s neither natural nor a pendulum.

I looked for the laser cannon, but couldn’t find it…

They need to go Full Terminator, and replace the blocks with human skulls.

It’s much more impressive when you realize it takes most humans more than a year to learn how to take a single step, and a couple more years before they can master this kind of balancing act.

All this to pass the butter?

This is really cool even though its long-term applications aren’t immediately apparent. As a bonus, Boston Dynamics continues to demonstrate that a robot doesn’t have to be in the Uncanny Valley to be bloody creepy.

The motion is so amazingly human… right until it’s standing on level ground again and doesn’t both lowering its arms.

Many of the breakthroughs in robot mobility can probably be used to develop more effective artificial limbs for amputees.

but it’s neither natural nor a pendulum.

Realistically it’s far more natural for animals because of the amount of data we have coming in to help us. Imagine walking across this terrain with your eyes closed, you’d be much much slower. Or just think about when you try and walk when your foot or leg is “asleep” and all you feel is pins and needles. Without all that sensory feedback it becomes very difficult very fast.

It’s like asking where you hand is. You know where it is because you feel the joints, the skin, and the environment it’s touching. Ask that of a robot and you’ll probably have angle sensors, maybe a vision system to help, but there isn’t way in the much of full on tactical feedback like animals have.