But it appears many people south of the border are refusing to stay home and continue to venture outdoors as usual. 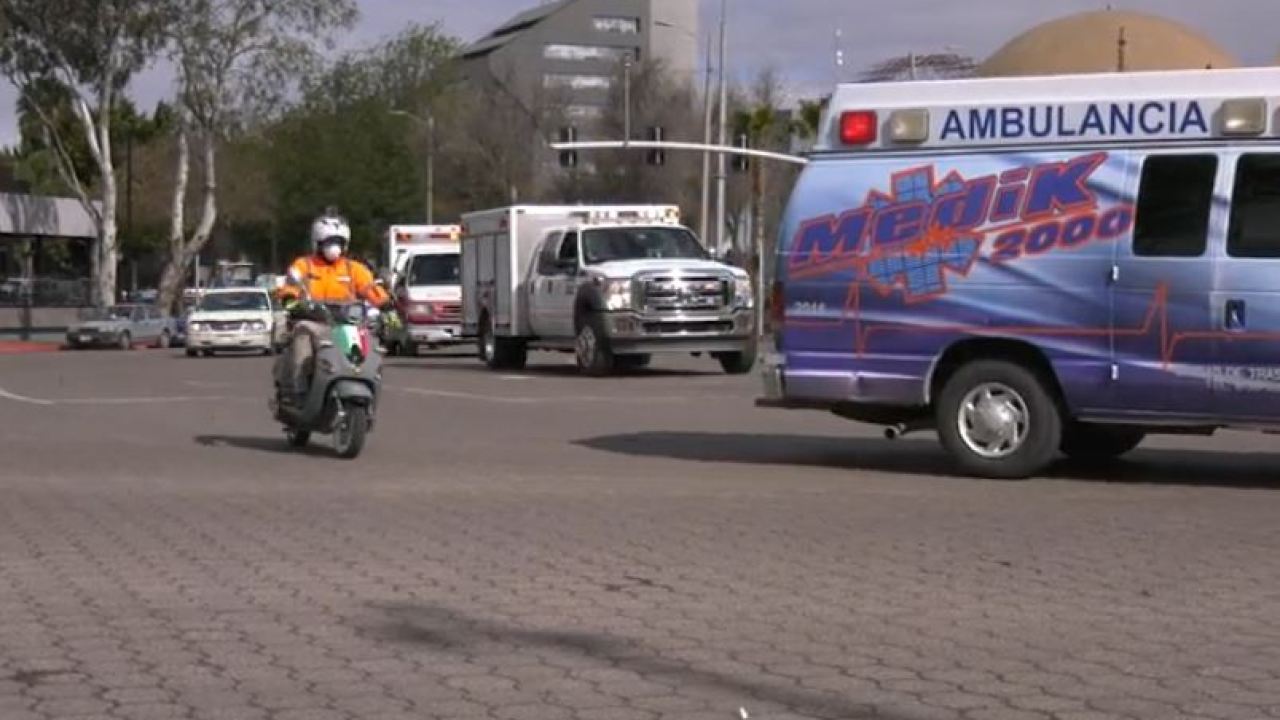 TIJUANA (Border Report) — Dozens of paramedic units have been rolling through the streets of Tijuana imploring people to listen to the warnings about the coronavirus.

As usual, the Loud Neighbors catty-corner across the street continue to gather in groups to drink and party as if nothing’s wrong.
I do not leave my room anymore unless it’s to go to the grocery store once every several days.

I do not want to think about what is going to happen in Mexico. Of course as soon as one American died Mexico, previously the greatest threat to all that is pure and good, effectively ceased to exist in the US media, but Trump is going to have a field day when the numbers start rolling in.

I suspect it will be a late wave rolling through that not many will be prepared for.
My doctor is masking and gloving up, and admitting only one person at a time into the office. There has been one confirmed case there already, which means it’s in my neighborhood.

I am going to go out on a limb and blame toxic masculinity for the foolishness of ignoring the warnings.

All they had to do was say, “Hey, here’s a way we can really stick it to Trump!” 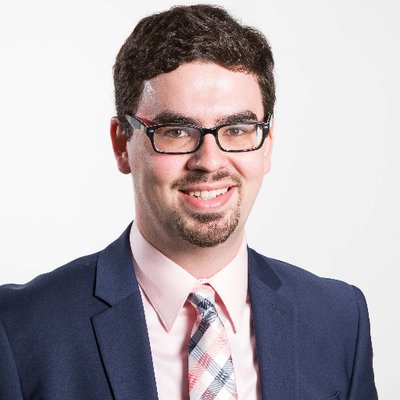 INBOX: Amazon workers at an NYC warehouse say they're staging a walkout tomorrow over "the company’s lack of safety protocols during the COVID-19 pandemic" https://t.co/2Srq4MWhjb 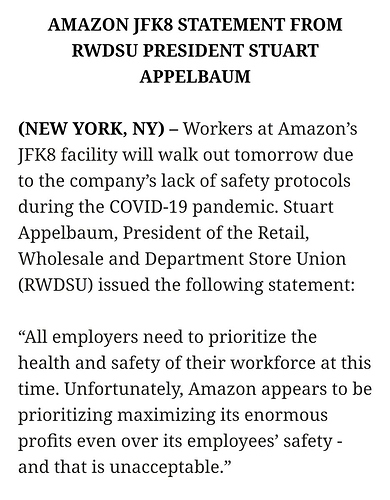 Launch ‘the biggest infrastructure program of all time now’

Green New Deal. Kick fossil fuel to the curb. Electrify All the Things. Do it now.

So, Amazon and Instacart on the same day.

This is how you do it. 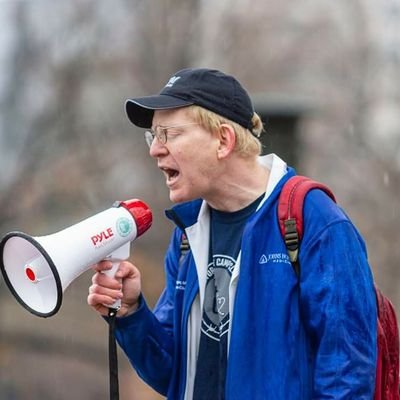 How many ICE prisoners have already died from COVID-19? (We don't know, and we won't.) 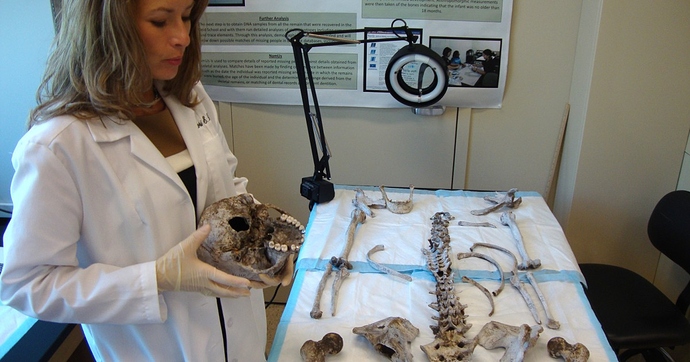 A series of mass graves filled with remains of unidentified migrants has been discovered in a South Texas cemetery.

I wish they would just say that he’s lying through his teeth rather than just saying “without offering evidence”.

And better yet, simply say, “The President again lied constantly through the briefing.” and rather than report on what he said, simply give the facts that stand against his lies

On Sunday in my town police had to intervene, because despite religious ceremonies being limited to max. 5 people more tried to attend the mass:
https://translate.google.com/translate?sl=auto&tl=en&u=https%3A%2F%2Fisokolka.eu%2Fdabrowa-bialostocka%2F32958-w-kosciele-musiala-interweniowac-policja
There were 40 more such interventions in Poland:
https://translate.google.com/translate?sl=auto&tl=en&u=https%3A%2F%2Fisokolka.eu%2Fdabrowa-bialostocka%2F32962-policja-interweniowala-nie-tylko-w-kosciele-dabrowie-bialostockiej 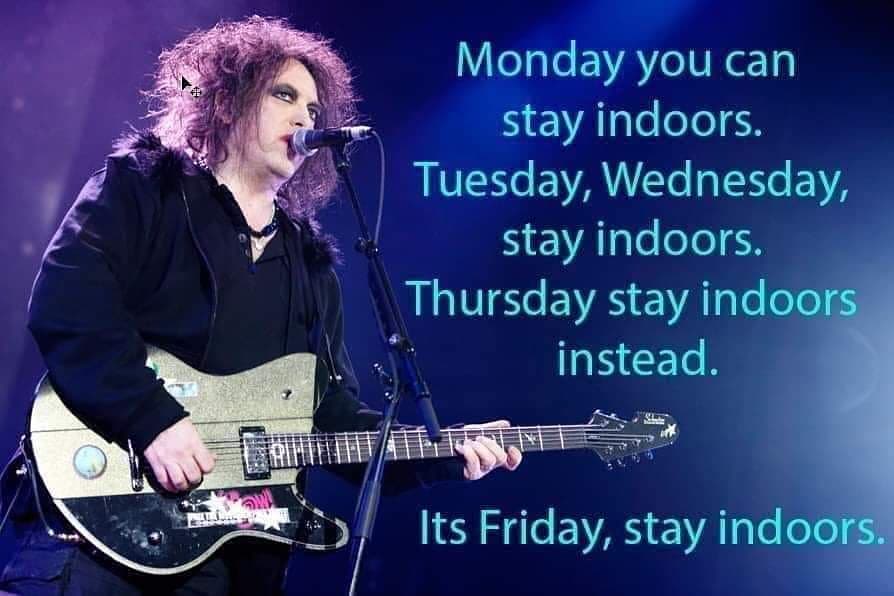 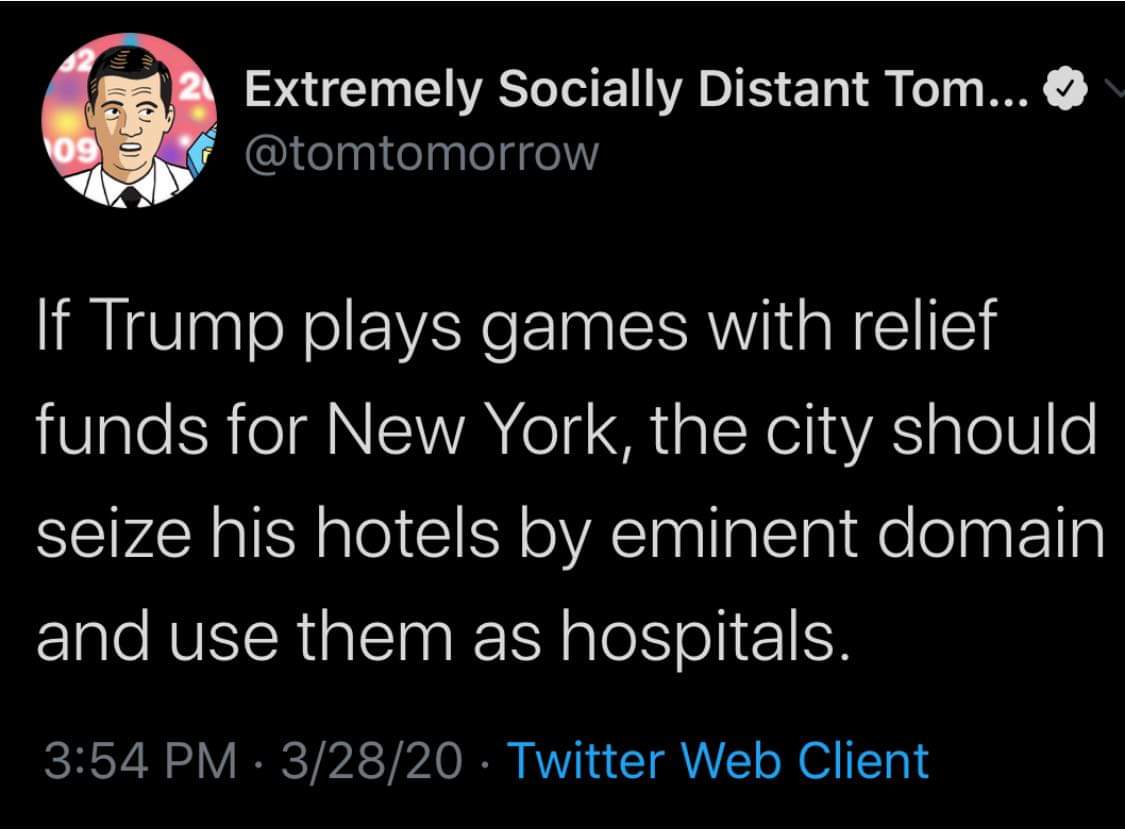 Derbyshire is the Butte, Montana, of the UK?

Saw this on google news. I probably should ruthlessly pare down the sites google news brings to my attention, but foreign fact checking can be a reminder that the form lends itself to politicization and propaganda.

News News: Several media houses (Not Times of India) in India carried a news report that claimed that India is set to witness a huge spike in coronavirus cases,

The “fact check” purports to examine the claims in this report: 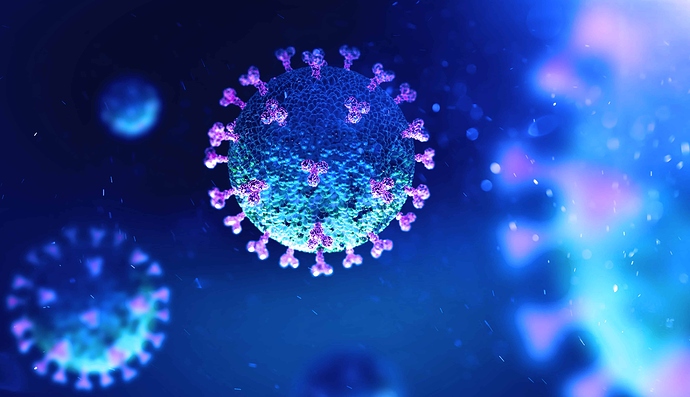 The novel coronavirus COVID-19 that has been spreading worldwide since December 2019 has sickened hundreds of thousands of people, shut down major cities, prompted unprecedented global travel restrictions, and influenced the global spread of...

and the extent of the fact checking is whether the authors of the report improperly used the logos of their respective institutions.

The statement attarcting the most attention is this one: 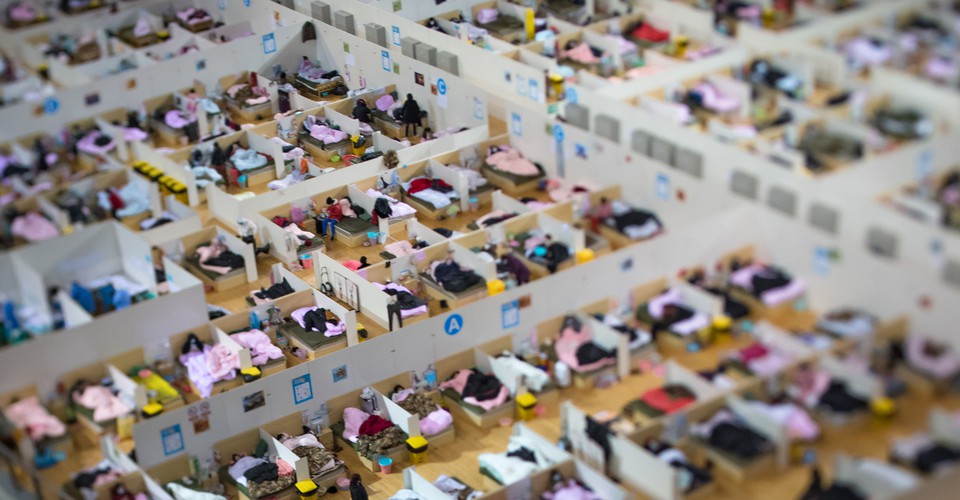 You’re Likely to Get the Coronavirus

Most cases are not life-threatening, which is also what makes the virus a historic challenge to contain.

Lipsitch predicts that within the coming year, some 40 to 70 percent of people around the world will be infected with the virus that causes COVID-19. But, he clarifies emphatically , this does not mean that all will have severe illnesses. “It’s likely that many will have mild disease, or may be asymptomatic,” he said. As with influenza, which is often life-threatening to people with chronic health conditions and of older age, most cases pass without medical care. (Overall, about 14 percent of people with influenza have no symptoms.) 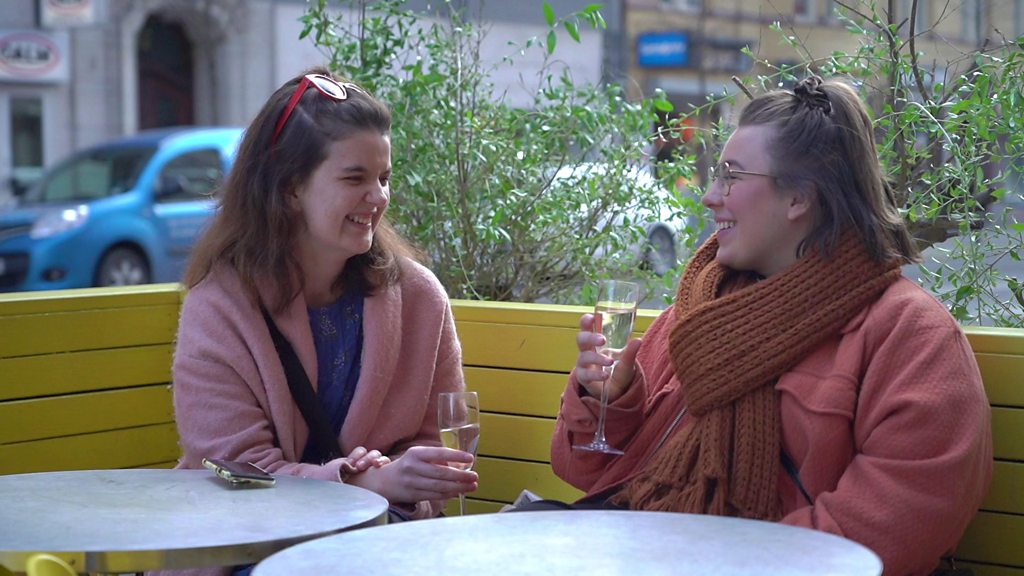 While swathes of Europe are under lockdown, Sweden is allowing life to go on much as normal. 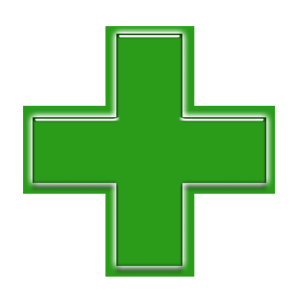 Today we donated our entire stock of disposable scrubs to an NHS hospital. It was just a few sets, because we don't carry large stocks, but they were desperate, so we sent them free of charge. We don't usually do politics on Twitter, but here's a short thread. [1/5] https://t.co/Z4ygmGr99M 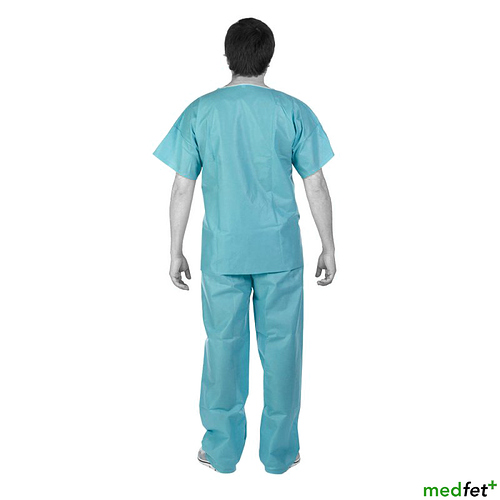 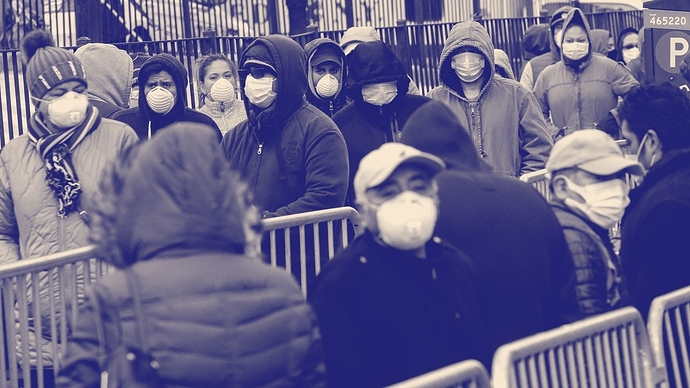 The Contrarian Coronavirus Theory That Informed the Trump Administration

Richard Epstein, a professor at N.Y.U. School of Law, discusses two articles he wrote, on the Hoover Institution Web site, entitled “Coronavirus Perspective” and “Coronavirus Overreaction,” and his views of the pandemic. 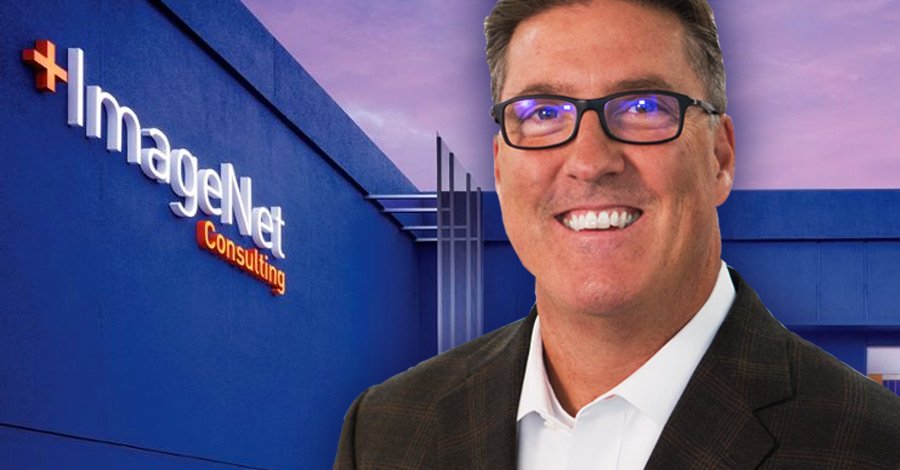 One of the few positive things about the Coronavirus pandemic is that it shows us just how greedy, heartless and merciless some corporations can truly be. For example, we have learned via the Ogle …