Wait, am I in the wrong thread? Something something Elizabeth Warren?

What it’s not called is an election.

Purchasing the primary is not the same as winning.

Losing the primary isn’t the same as winning.

None of the voters who gave Hilary that win received a cent from her.

Bernie lost - big time. You can try and call that a win all you want.

It isn’t. The voters didn’t support him.

The super delegates who put their thumb on the scale were purchased. At a certain point the votes didn’t matter because of the super delegates. Do s google search on the math. You can be in denial all you want about this but, it’s going to be in the history books my friend.

The non super delegate vote count didn’t matter because before a single vote was cast because she purchased the super delegates votes and they were showing her winning without even having a single non-superdelegate vote on major news stations. She rigged the process and still lost states in the primary that she lost in the general and Bernie would’ve picked up. Bernie could’ve won but, since Hillary CHEATED the process, we will never know.

Should the delegate count reflect the popular vote?

You can’t have it both ways - either the voters supporting the candidate winning the election should have their decision stand - or some other metric should have given Sanders the election because reasons.

He’s not a career politician because you like him.

He’s ahead of Warren in the polls because you like him.

He’s got more hair than Harris because you like him.

OK you see this stuff in Third World countries that literally people are told not to even vote because we already know the outcome. If you really want our Democratic Party to aspire to be that I’m going to say that you are a very sad person. Ironic that you’re arguing there shouldn’t be a Democratic process in the Democratic primary.

OK you see this stuff in Third World countries that literally people are told not to even vote because we already know the outcome. If you really want our Democratic Party to aspire to be that I’m going to say that you are a very sad person.

You’re the one saying that the voters decision shouldn’t stand and that your opinion should substitute for it.

How sad is that?

I’m not saying that all all lol. You’re twisting my words because you’re still in denial. My words run directly counter to how you’re trying to frame them.

Why Elizabeth Warren is Right on Currency Values

she won more primaries and caucuses than sanders.

she won more votes to the tune of around 3 million in the presidential election than 45 did and only lost the election because of the way the electoral college skews.

none of that represents denial. the reason your words can be twisted so easily is because they run counter to reality.

on the other hand, you’re not wrong about warren. as described by paul krugman in the editorial linked below, warren has demonstrated how progressive real data about real solutions to many of the problems facing the u.s. can be. and that progressive trend is very popular. the things she wants to do are very popular and actual data backs those things up as feasible. 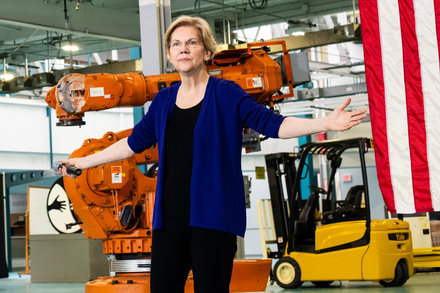 Opinion | Liberal Wonks, or at Least Elizabeth Warren, Have a Plan for That

The surprising power of evidence-based progressivism.