Out on Blue Six: Ian McDonald's brilliant novel is back

I read OOB6 about 6 times in 2 years (1993-94) before I loaned it to an acquaintance, who promptly left the country the following week.

I can’t wait to read about the racoons again.

This is an excellent book, and that is a terrible cover, especially compared to the lovely original. If they couldn’t get the rights to that, a text-only cover would’ve been preferable to this crap. 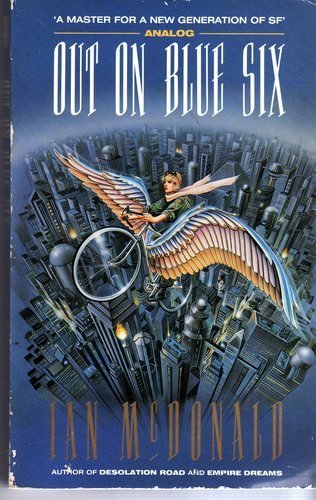 Out on Blue Six was a huge–HUGE–influence on me when I first read it in highschool. The cover art reminded me a great deal of Terry Gilliam’s Brazil, which was more than enough to draw me to it…and even though the story was only broadly similar to Gilliam’s masterpiece, there was enough of overlap there to get me interested and draw me in. Today, I like the book better than Brazil! But that new cover, much like the cover to the reissue of King of Morning, Queen of Day is ABYSMAL. I will gladly create new covers for these books FOR FREE.

I don’t care how good it is, I’m not paying that price for an ebook,

If you look at his recent reissues of his older novels as ebooks, he has a consistent cover theme going on with them.

$10 is too much for an ebook? I guess you don’t read many ebooks then since that is the most common price point…

There are plenty of used copies available online. Just picked one up for 16 cents (plus $3.99 S&H). A hard copy that you will actually own with the good cover art; what’s not to love?

I guess this is where Mark Radcliffe got the name of his rather good, early 90s radio show from then…?

I just read the prologue and HOLY FUCK I CANT WAIT TO READ THIS SHIT AND HOW DID I POSSIBLY MISS IT BACK WHEN?!?!?!

Reminds me of Rudy Rucker so far, and as far as I’m concerned that’s about the best compliment possible to give.

I’m old enough to have bought the first edition from an actual bookstore. It is pretty fascinating to compare his work from back then to today and see how his style has evolved, from what amounts to SF magical realism to multicultural hyperrealism. To me, he is consistently the most interesting writer in SF.

If I didn’t love the book I’d be tempted to ask “who the fug cares?”