Thank you Pauline. For being wonderful, and yourself, and wonderfully yourself.

Not enough accordion in the avant-garde.

Morton Subotnick, not Subtonick, unless that is a subtle musical joke.

Oliveros was remarkable, not least for her use of the accordion.

Thank you David and Boing Boing for publishing an obituary to one of my favorite composers and a pillar of 20th Century music. Always a pioneer, Oliveros built many new communities and settlements in many new musical territories.

To commemorate the life and death and music of Oliveros in my own small way, I have uploaded an undergraduate essay I wrote on her seminal piece Bye Bye Butterfly to the Internet Archive. 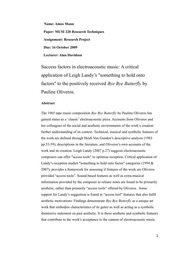 An undergraduate essay of mine from 2009 titled: Success factors in electroacoustic music: A critical application of Leigh Landy’s something to hold onto...

I think I got an A+ for it, but it’s very dry - it does have a good bibliography though! If you have any interest in electronic music, I highly recommend this history of the Tape Music Center:

(In the essay I was actually just using the very well received Oliveros work in a round-about-way to try and discredit theorist Leigh Landy’s “something to hold onto factors” which, to me, seemed to be tantamount to a prescribed recipe for electronic music composers to use to make their work more accessible e.g. “iii. No more than four sound types at once”. The horror!).

I purchased an ipod nano for cheap on craigslist, and completely filled it with minimal ambient music, including several Oliveros pieces. It sits on a little player/dock, and often just plays subtly in the background. I always know when the Oliveros pieces are playing, because at first I will think it has stopped working.

I can’t believe I wasn’t familiar with Oliveros before her death. I’ve been listening to “Accordion and Voice” and it’s knocking me out.