Not really, no. ‘Baking’ and ‘firefighting’ came to mind because they were the examples used in this Sarkeesian rant about LEGO coming out with a pink town playsets where girl figures bake and shop all day, separated from the traditional ‘city’ playsets where boy figures have dangerous and exciting jobs like motor racing and firefighting.

I think her point about the absurdity of making toys involving domestic activities girl-only and adventurous ones boy-only is a good one, and relevant.

Yes, there are plenty of men baking cupcakes in reality TV and life. But this is important: can a boy get a gender-neutral baking-themed playset for christmas if that’s what he likes? Can a girl get a woman firefighter doll? Yes and yes: Playmobil. Are there others? Honest question here.

Hey, good timing for this bit of news.

I think this matters.

Edit. I was going with “Playmobil already has an awesome female dinosaur biologist (Science!)”, but on second though that little guy might be a guy. Who knows. 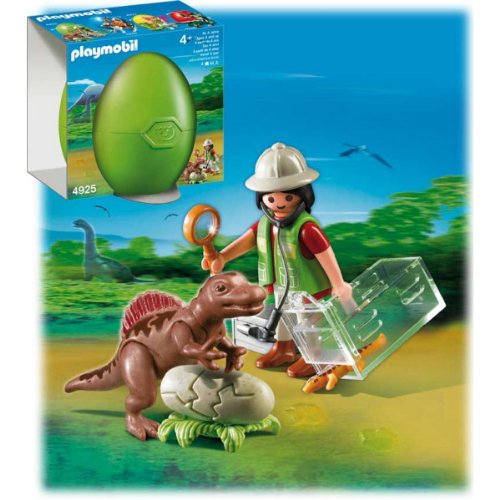 Isn’t that a megaphone in the police officer’s hand? Certainly doesn’t look like a gun.

I though your forest ranger explanation made more sense than the shocked and horrified article author, and sure enough there are many, many swank Playmobil ranger figures protecting the wildlife in all continents with their cute little hats and scoped rifles. Even a WWF panda ranger! They really have a few of everything, don’t they? 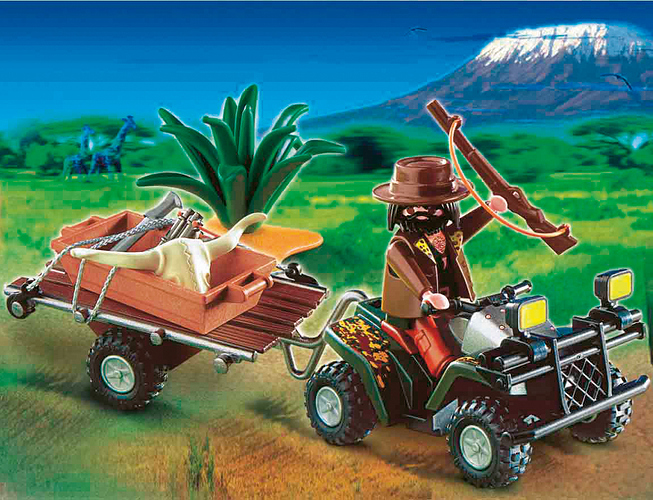 I’m pretty sure this guy in brown actually is an evil poacher, though. Feel free to resume shock and horror. 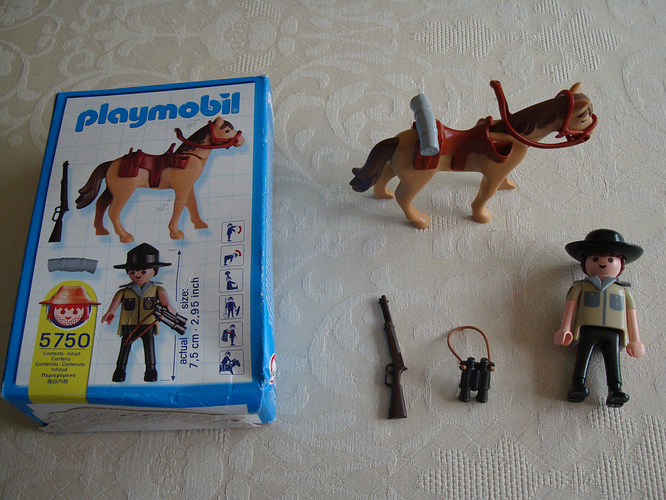 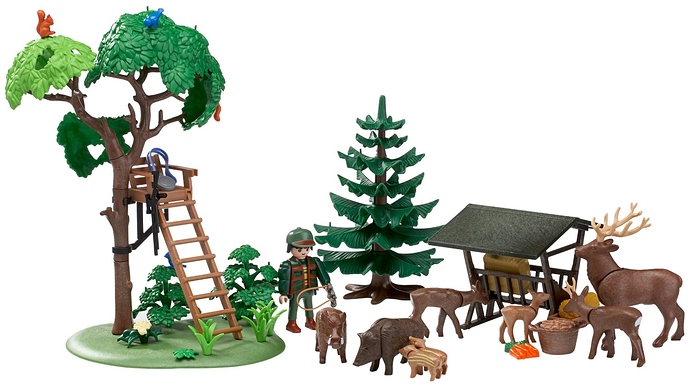 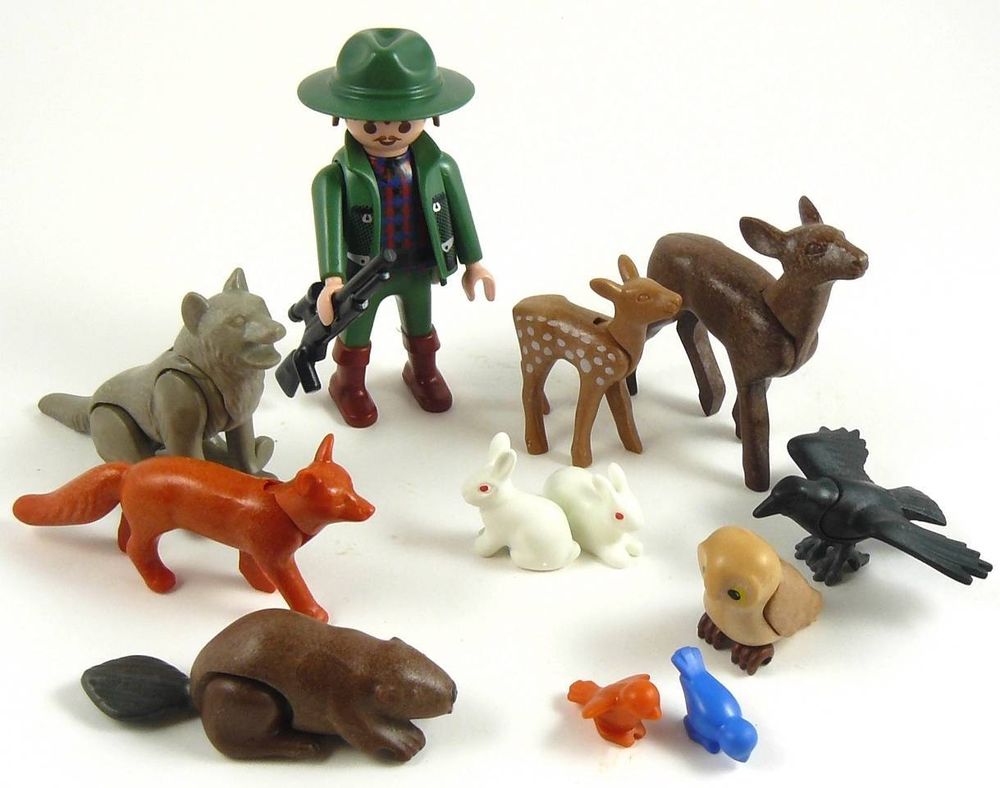 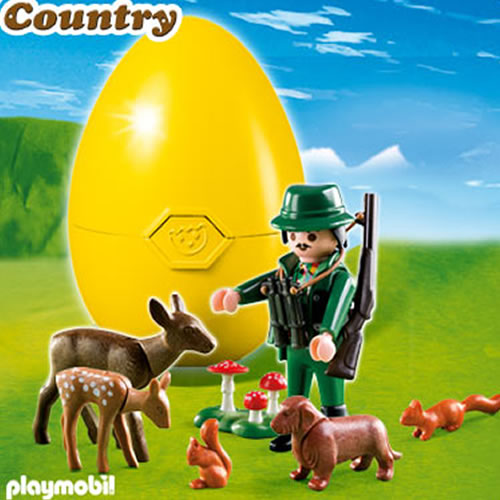 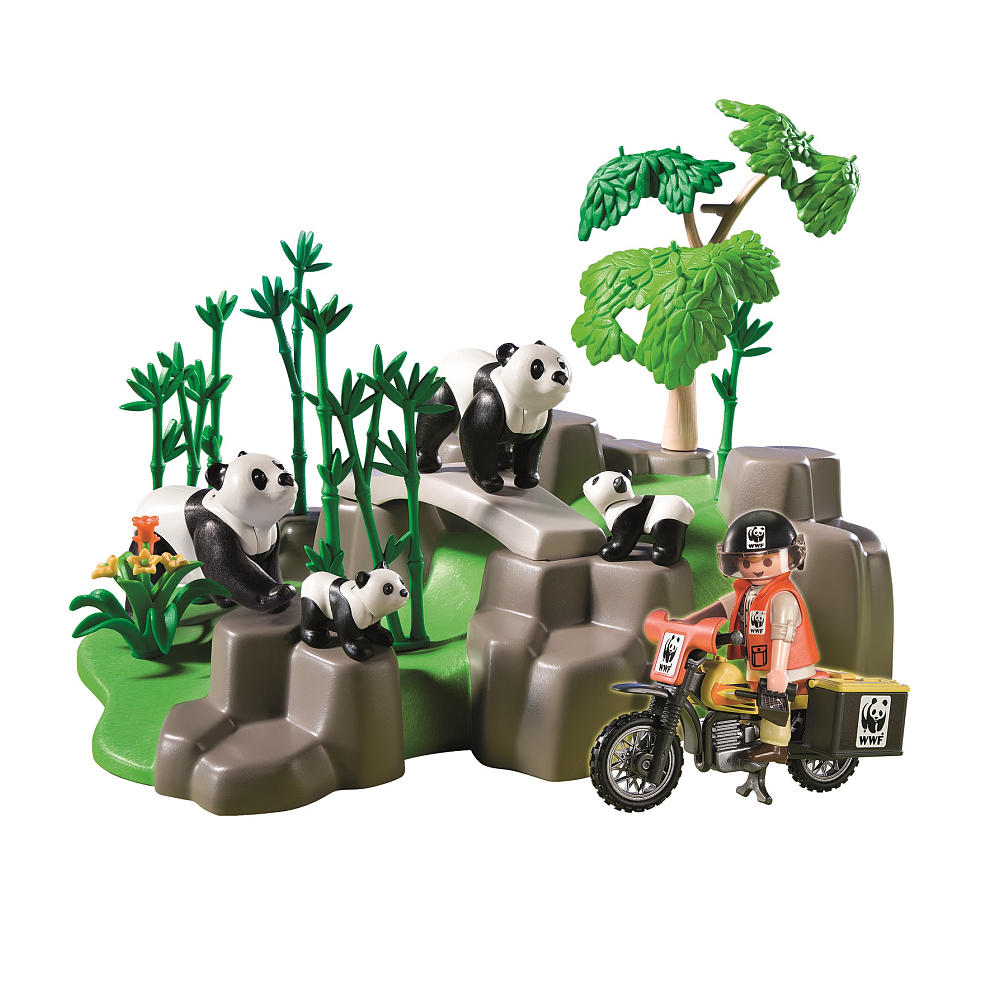 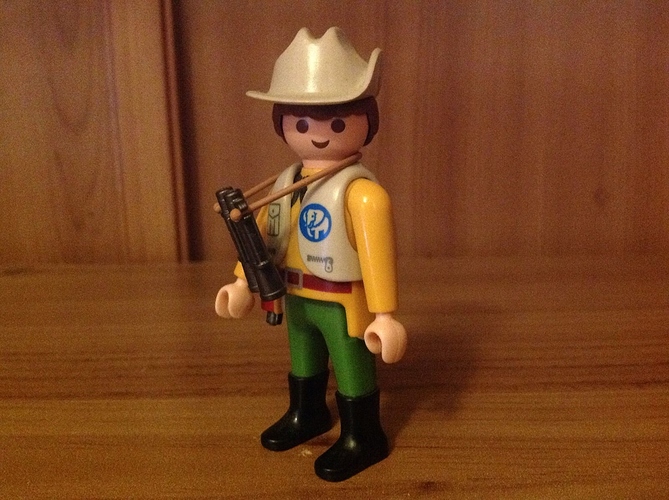 That guy in the article, though? With the cute animals? Stone cold hunter after all.

(ok, I’ll stop geeking out about those toys. my work here is done)

If you’ll check out the upper lip of the pizza baker, I think you’ll find that they have got men in their kitchens as well.

We have had tons of Playmobil over the years. My daughter is Asian and I could cry about how Asians aren’t well represented in the “cooler” positions, but rather than do that, I just pop off the white heads/hair on certain characters (like the Queen) and replace them with Asian heads/hair taken from elsewhere.

If I find a certain set mildly “objectionable” (e.g., I personally wouldn’t want the hunting one, but I wouldn’t deny it to anyone else), I simply don’t buy it. The sets like the “hobo” just kind of make me laugh, even though I’m a dyed-in-the-wool lib. If they put out a “school shooter” set, then I might have something to say about it, but you’ve got to pick your battles.

Sorry, Playmobil lovers, this is 2014 in a well-heeled, progressive neighborhood of the internet.
We can brook no gray areas, no compromise, no benefit of the doubt. Someone has been offended; therefore Playmobil is guilty. This unfeeling capitalist enterprise has transgressed against the Correct Viewpoint and must be banned, boycotted and destroyed. They have proven themselves, by selling these products, to be misogynistic, racist, colonialist, fascist, class-ist, and anti-animal.

As if any child could look at these products and not instantly begin to act as an oppressor!

IMHO, a megaphone would include the bell piece on the end. I can see the argument for it however.

There’s not that many options for items that the Minifigs can hold. You see a lot of them waving around handcuffs and a few with radios.

My favorite is what I can only think of as the “Forever Alone” playset: http://www.amazon.com/PLAYMOBIL®-5332-PLAYMOBIL-Comfortable-Living/dp/B003AQBWTY

I was wondering when someone would blame Playmobil for the Shoah.

I’m not “blaming” anyone for anything. I’m also not snidely implying that your countrymen are likely to be Nazis, which is more courtesy than you’ve showed me. I’m saying that it’s perfectly reasonable for a nation with a history of brutal racism and genocide to be sensitive about it and feel like it’s not the best subject for children’s toys. There’s nothing wrong with that, whether it’s Germany or America, and if you think there is something wrong with it, you should probably get your own house in order before you go acting all superior.

An answer from Germany here: I’ve interviewed my kids separately about the image of the policeman and the homeless guy: I told them I would show them a Playmobil box and would like to know what they thought of it, ie, what is going on, whom they see etc. My daughter (8) said that she sees a soldier (because of the sword) and a poor man who is hiking and drinks from a bottle of water. After asking if the soldier could be something else she inferred that he also could be a policeman from long ago, but her certainly wanted to help the man on the bench because he was poor. My son (6) said that there was a knight (the sword, you know…) and a poor man sitting on a bench and drinking water. And he was happy because he was smiling. Apparently the knight wanted to help the man get some money. So my little sample indicates that some of the author’s interpretations really have nothing to do with what the kids see.

I was certainly not trying to imply that Germany was inappropriately (in any sense of the word) its military forces. I assumed the Border Guards/Federal Police to be soldiers due to the camouflage uniforms, boots, field caps and automatic rifles. Evidently I assumed incorrectly.

This still doesn’t change my point that in a pre-TSA era, the security at airports there looked very serious.

Hauptmann von Köpenick is one of my favourite little vignettes from history. I’m surprised it hasn’t been turned in to a big budget Johnny Depp film.

No, when your own house is full of shit, that’s the time to start complaining about the neighbours’ stink (that scentence sounds so much like it should be an old saying I’m wondering if it is).

Growing up in the UK, everything I was taught about my nation’s history concentrated on how we brought civilization to the ignorant foreigners, that included are neighbours in Europe… and nothing about the cost in human misery of our high standard of living.

Oh yes, good point. In the traditional German narrative of the Wild West the native Americans have always been the good guys, even if political correctness and historical accuracy occasionally left a lot to be desired.

Well, it’s not like they can expect to see local presentations of Aryan types slaughtering non-Aryans, because since losing WWII, public support of genocide by actual Germans got banned. They have to get that urge sorted out some other way, so they turn to cheering on foreign genocides.

Was that politically incorrect enough for you, Dirk?

Sometimes I wish that all countries that were involved in the war had adopted a similar perspective to the one in Germany. Obviously what the different countries did is not equivalent, but the Germans seem to have emerged with a strong support of equality and free speech and an aversion to war, government overreach and nationalist ideology that is focused on their own responsibility to avoid anything similar happening in the future. People in the UK and America seem to have learned much less on the whole and many seem to have the fairly unchallenged assumption that the victory was an affirmation of their own moral superiority.

It’s true that increasing militarism in Germany was one of the main causes of the war and military engagement by the Allies was one of the main ways that naziism was held back, but this fact seems to have unjustifiably laid the foundation for increased militarism in the years since then and kept people from critiquing the uncomfortable realities of moral compromise by their own countries. Germany doesn’t have the option of labeling the war as someone else’s moral failure, so they had to engage with the ugliness of their history a bit more thoroughly in the aftermath.

But then, you repeat yourself.

Yes. To the average traveler, a Bundesgrenzschutz with an automatic weapon is going to be fall into mental category of “soldier,” particularly to travelers in the US which, unless you live on the southern border, doesn’t really have contact with armed Border Patrol agents.

I take it you don’t have kids or play with legos. I am awash in Lego Star Wars blasters.