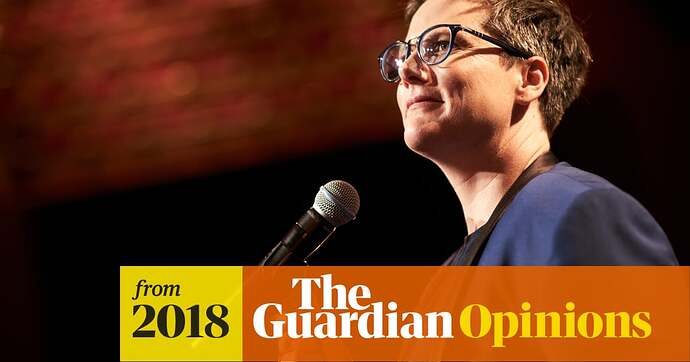 Hannah Gadsby's Nanette dares to dream of a different future – for ourselves...

The simplicity of the Australian standup’s Netflix special gives us space to laugh and cry, and inspires us to tell our own stories

A deconstruction of the form, the show won the major comedy awards in Adelaide, Melbourne and Edinburgh, before she took it to the US where the New York Times dubbed Gadsby “a major new voice in comedy”. Now it’s a globally praised Netflix special, and Gadsby is a comedy star.

Seconded. It’s just a pity that it took fully telling her own story, as she’s saying she has to get out of comedy, to reach this level of attention.

Also, I wonder how much damage is being done by having to dredge up that anger each time she does the show. Especially as she’s saying - as mentioned above - that she has to get out of comedy. Or maybe it’s cathartic?

I wonder how much damage is being done by having to dredge up that anger each time she does the show.

I wonder if it’s all that repeatable.

Tell you what though, despite her saying anger doesn’t achieve a damn thing, I totally relished her anger. I thought I enjoyed Bill Hicks hanging shit on marketers, but this was next level.

It left me wanting to see more anger from peeps not male, white and straight.

Yeah. That’d be good. But not if it leaves them exposed to haters or emotionally.

You are the first person, and I thank you! Just added this to the queue.

EDIT: This special is like nothing I’ve ever seen - it’s incredible, heartful, inspiring, scary, awesome, lovely, and hilarious. It reminds me of the feeling of connectedness I get from reading the best David Foster Wallace essays and speeches. My wife and I were blown away, and couldn’t talk much after watching.

Brilliant. Thank you. Wouldn’t have watched it without the recommendation.

So do I have to be subsrcibed to Netflix to see it?

I found a torrent

I watched the special a few weeks after seeing her on Late Night with Seth Meyers. Even though the interview covered the topics of the special, I was in no way prepared for the emotionally bare gut punch she delivered. It’s hard for me to believe she performed that show more than once. Amazing.

To be honest, after the rave reviews I found myself a bit underwhelmed until about halfway through her set. Though her comedic timing is fantastic, it was not new material or presented in a particularly unique way.

But there comes a point in the show when you begin to understand that’s entirely the point. That her experience has been shared by countless others over countless years. And in many ways her comedy routine is truly just a setup for the real punchline.

Pull our fucking socks up, indeed.

This is a rare and important piece of theater, genuine in delivery and powerful in its form. Thank you for sharing it with our community.

I was in no way prepared for the emotionally bare gut punch she delivered.

My wife came in toward the end of it; I couldn’t explain why I was crying, just suggested she watch it from the beginning.

This is a rare and important piece [of] theater, genuine in delivery and powerful in its form.

That’s what I thought.

Thank you for sharing it with our community.

"The stunning Netflix special that made Louis C.K.’s comedy irrelevant."

Thanks @Kimmo, finally gave in and got a Netflix free trial just to see it. So, so worth it. I hope the word about it, and about her, keeps spreading.

I hope the word about it, and about her, keeps spreading.

Fer sure. Did you submit it the usual way? I doubt any front page writers have seen your post here.

I flagged it and @orenwolf got back to me with the link.

Just came across this:

I hope she continues with stand-up. The genre is evolving, as are our views and how “comedy” affects those views. It’s always been about more than just the jokes, and her performance epitomizes that.

“Maybe if comedians had done their job properly and made fun of the man who abused his power, perhaps we’d have a middle-aged woman with an appropriate amount of experience in the White House rather than, as we do, a man who openly admitted to sexually assaulting vulnerable young women because he could,”