Dang, gotta get me some whitewalls.

I like how the put a big sticker on the windshield, to protect against a lack of blind spots.

There would be some modifiers for vehicle size, too. (Oversize vehicles, subcompacts.) I love home brew rules for equipment like this!

Doesn’t matter, the new rules set will see it all reset anyway.

There is that, yes. I was a MiB when the supposed 5th Edition came out - I promoted it a lot, but then it went away as fast as it had appeared. Too bad too, I had earned a spot to be an NPC in one of the books.

I’m guessing it wouldn’t that much more difficult to use than a PIT_maneuver and probably safer. It would probably take some precision driving to not just rear-end the fleeing vehicle when deploying it though.

One does wonder what would happen if the fleeing vehicle locked up it’s brakes in the moment before the tire was snagged. I’m guessing if timed right the non-turning rear wheels would avoid being snagged, cause a rear-end collision which would destroy the Grappler and possibly take out the pursuit vehicle’s radiator. Of course, there’s also a good chance the mangled Grappler could puncture the fleeing vehicles gas tank, cut its brake lines and/or skewer the poor kidnap victim in the trunk.

Can we get Robert Rodriguez to make some fake trailers for this starring Danny Trejo?

They were lining it up to impale him on the grappler

What? This seems like a solution in search of a problem.

I predict a dramatic surge in the rate of vehicles “resisting” cops given these. /s

Dang, gotta get me some whitewalls. 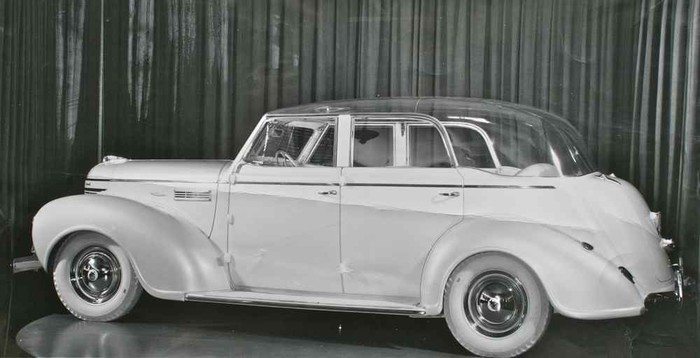 My first impression is that it was a prop from either mad max or the walking dead.

I don’t know if it works. I just know that it ROCKS!!!
Because ROCKS!!!

I’m glad that they didn’t have this in the last Need for Speed game that I played because I bet those digital cops would have had no trouble using this at all (not at all).

I wonder if this device blasts it’s own sound track?

I would have expected to see that on front of the Batmobile, 1960’s era.

I was dubious until I heard that music.

Just call it in and set up a roadblock you machismo-addled James Bond-wannabes.

This looks, to my untrained eye, safer than a stinger or a PIT maneuver.

And a far cry from cracking a block with a rifle round.

Looks a bit safer than shooting them from a helicopter like in Brazil.

It wouldn’t take much weaving to make a snag very difficult,

And the more it weaves, the more likely other vehicles can join to perform the box maneuver instead.

That’s because they need to last the entire event until all others are knocked out. This is NOT a comparable situation.

And if the perp locks the rear brakes in causing the collision then I don’t think this thing will be wrapping around the tires.

Why not? If the suspect get into a collision it’ll be stopped nonetheless.

[quote=“simonize, post:2, topic:88910, full:true”]
just slamming on the brakes and instituting a collision would seem likely to damage the chase vehicle more than the target. [/quote]

Why do you think cop cars have bull-bars up front? And it’s pretty easy to have the bumper to autotrigger the brakes when the capture device deploys.

It does seem it would works quite well against the typical big lugged, open wheeled Mad Max type vehicle, yeah. Might be some trouble getting into position though…

And that’s exactly why you need a better plan for dealing with police choppers than just “drive really fast”.

Before seeing the video, I was thinking that Speed Racer had a gadget to disable a competitor’s wheel.