Right? It’s about power, not being Catholic. Pretty much any organization that you dig into, you will uncover crimes and attempts to cover those crimes up. Getting away from child abuse, how about pretty much most of the major media companies when it comes to sexual abuse across the board? Many of them covered up crimes by people in power, too.

I’d disagree with the “rotten to the core”.

The biggest issue I have with the org is the protectionism of the priests and the bishops who lead this.

Just FTR, the second sentence is what I meant. The top clergy is the problem. And special regulations, like the one in Germany, where the church is allowed to deal with their own based on religious law rather than letting worldly justice deal with child abusers first and foremost.

I really don’t have the nerve (and time) to discuss this in detail, but I wanted to express my solidarity with the poster accused of whataboutism.

To rephrase/reiterate: a institution claiming to be in possession ultimate (!) moral authority, in my opinion, be acutely scrutinsed if it adherese to moral standards.
I am no scholar of dogmatism, but I’m willing to be dogmatic on this.

Some scum have no regard for the sanctity of life or human dignity.

My understanding of Christianity is that the New Testament was a basically a sort of update to the Old Testament. So you basically get to pick and choose which parts of the Old Testament you think apply. I think Leviticus is one where they usually say “oh, that was meant for ancient Jews, not us”, of course if there’s a bit you like there’s probably a way to say “hmm, well God still thinks that”.

Considering the topic, it’s kind of ironic how much that picture manages to make him look like Thanos.

According to Matthew 5:17-19, all the Old Testament stuff still applies. So no wearing of “garments with mixed threads”, no working on the Sabbath, and no shellfish – at least in theory. I agree that Christians generally seem to be happy to pick and choose, but that just adds to the hypocrisy. OTOH, it’s probably just as well that we no longer kill people for cursing their parents, which many if not most teenagers are likely to do on a regular basis.

If the Pope was really serious about this, he’d ask his heavenly Boss to provide a definitive list of those commandments in the Old Testament that Christians are actually still supposed to follow in the 21st century, possibly with any appropriate updates added (“Thou Shalt not Like Thine Own Facebook Posts, it is an abomination”). Given Mark 11:24 that shouldn’t be a big thing, and it would make life that much easier. The Pope probably doesn’t want to do it because the answer might be “all of them of course, what in My name do you expect Me to say?”

According to Matthew 5:17-19, all the Old Testament stuff still applies.

And I could counter with Matthew 22:35-40, and on and on ad infinitum. If you’re going to talk about picking and choosing, maybe have an understanding of Christian philosophy, culture, and history as a whole, rather than two verses out of hundreds? Even just within that chapter, Jesus’s statement is extremely contextual.

Plus Matthew was what Jerome called the Gospel of the Hebrews and was the text used by thr Jesus group in Jerusalem led by Jesus’s brother. As such it was a reforming rabbi’s text rather than a Christian’s. Following the law of moses was explicitly how one entered the kingdom of heaven. The bit about the adulterer and not stoning is a late addition to make it less Jewish.

The Bible is only one of the texts Catholicism is based on and the writings of the patristic are also important.

Whether this is any more or less pure or intellectually consistent than biblical fundamentalism is not something I have a strong opinion on. I do have a sense that if you are mad for the old texts you should perhaps consider becoming Jewish though. It has been known to happen to fundamentalist scholars I believe.

I think Jesus did that.

38 “You have heard that it was said, ‘Eye for eye, and tooth for tooth.’
39 But I tell you, do not resist an evil person. If anyone slaps you on the right cheek, turn to them the other cheek also.
40 And if anyone wants to sue you and take your shirt, hand over your coat as well.
41 If anyone forces you to go one mile, go with them two miles.
42 Give to the one who asks you, and do not turn away from the one who wants to borrow from you. 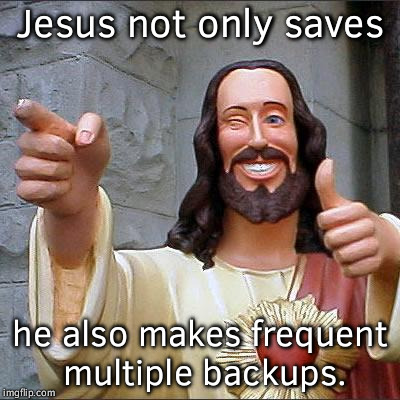 So other organizations did it. (it’s all good)

Really? Did the Boy Scouts of America dump bodies? https://www.bbc.com/news/world-europe-27703711

The BSA released their employee files; did the RCC do the same?

The RCC has a LOT to answer for.

When I was a wee bairn and went to mass on a regular basis, this is the message the fathers used to preach: an eye for an eye was not a command to poke the other guy’s eye out, but to go no further. It was a maximum, not a minimum. And Jesus went one further, and hammered the point home that you should not look for revenge at all, at a time when the locals in Judaea and Galilee were to the Romans like the PLO to Israel in Gaza and the West Bank. Or the IRA to the English. It was radical.

Now, in full honesty, I now identify as agnostic, but I fully support Pope Francis and how he is trying to reform the church. His is the spirit of the pastors I grew up with, the idealists that believed in the Vatican II reforms.

Much like other institutions during the modern period, they have blood on their hands. No doubt. No one said otherwise. But this isn’t a catholic specific issue, and never has been.

And to imagine that a complicated institution that has existed for as long as the catholic church has not also done good works is myopic at best, and smacks of just typical anti-catholicism - which itself often leads to crimes against humanity (the English dehumanization of the Irish during the famine or the violence of the reformation in general). I’ve said this here before and will say again: large institutions are never infallible. Never. The question is what those organizations do to reform themselves. The current Pope is at least making noise at reforming the policies that led to the mass cover up (especially with regards to the Magdalene laundries in Ireland). However, he’s working within a massive bureaucracy and against those whose primary goal is to cover up vs. reform. Even though he has great political power within the organization, he still has to work against those who don’t want to see change. Some of this attempts to reentrench more conservative ideology is likely still blowback from Vatican II, which were pretty radical changes. By the time he passes away, I would love to see another set of sweeping reforms along the lines of Vatican II, including a strong policy with regards to abuses like this. It’s really up to those in the church to show support and backing for reforms.

*gif all you like and yes I’m anti-Catholic.Unapologetically. Doesn’t change how horrible and corrupt the organization is. Nothing, not a thing, of what you wrote, while beautiful apologetics, changes a thing:

The RCC is foul and has always been foul. Oh, and I’ve not even begin to cover the institutions’s finances.

And the Pope’s #2 guy has just been charged with kiddy diddling and you put it all into a whole paragraph of history. Right.

But child molestation and obstruction to justice is still pretty much OK for the church.

And how are they handling that? Did they protect him or has been charged? Or are they covering it up? If so, how was he arrested?

the problem was and remains power. Again, plenty of other organizations have and continue to cover up heinous crimes. It’s not just the catholic church.

But child molestation and obstruction to justice is still pretty much OK for the church.

And how are they handling that? Did they protect him or has been charged? Or are they covering it up? If so, how was he arrested?

Sure now he’s been sent the the secular authorities.

The RCC is foul and has always been foul.

FFS calm down. This thread is about the Bishop of Rome opposing capital punishment.