Could he had at least waited until we are finished with trump.

When it comes to “Thou shalt not kill” and the Sermon on the Mount, most self-described Christians turn the other cheek.

The Catholic Church has generally opposed capital punishment for some time (John Paul II made similar statements) but it’s nice to see Francis come down on it more forcefully.

When I was a young lad attending after-school Catholic classes the nuns were very clear that “pro-life” meant opposing the death penalty as well as abortion. I still agree with half of that position.

That would be letting him off easy. I fervently wish to see him behind bars and medical science using all means to extend his life as long as possible to enjoy the hospitality.

When I was a young lad attending after-school Catholic classes the nuns were very clear that “pro-life” meant opposing the death penalty as well as abortion. I still agree with half of that position.

Every once and a while you run across clergy and the like who are at least kind of consistent.
When I was a teenager, the priest at our friends’ church had been arrested more than once at no-nukes protests.

When I was a teenager, the priest at our friends’ church had been arrested more than once at no-nukes protests. 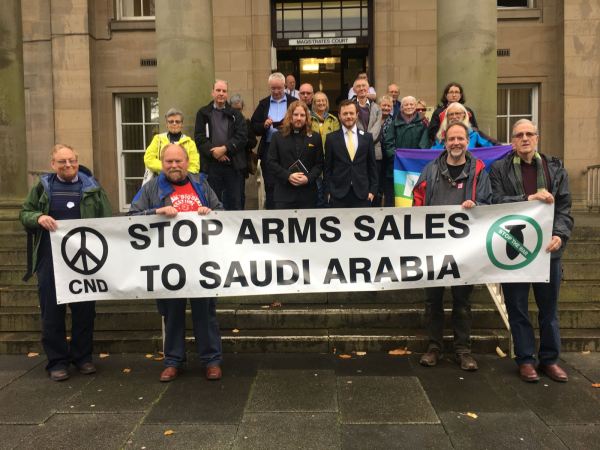 In the second broadly positive result for the anti-arms movement, Quaker activist Sam Walton and Reverend Daniel Woodhouse have been acquitted of any law-breaking over their attempt to break into a…

The pair were found not guilty at Burnley Magistrates Court following their arrest for an action at the BAE Systems’ site in Warton, Lancashire on January 29th where they tried to disable the warplanes, which had Saudi markings painted on them, from being used to support the ongoing bombing of Yemen. Sam and Daniel successfully argued that their intention was to save innocent lives and prevent war crimes, by physically disabling the warplanes.

I support the Church’s stance on the death penalty and on immigration. Come on Catholics, mobilize!

I would love to ask him “So what about Christ being executed by the state, was that OK, or should he have been set free, and therefore never resurrected?”

No, of course not. But the Catholic church is a long standing institution made up of entirely fallible people. I think pointing out the good doesn’t negate the bad. I think we can hold both in our head at the same time. 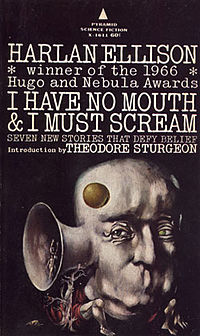 I Have No Mouth, and I Must Scream

"I Have No Mouth, and I Must Scream" is a post-apocalyptic science fiction short story by American writer Harlan Ellison. It was first published in the March 1967 issue of IF: Worlds of Science Fiction. It won a Hugo Award in 1968. The name was also used for a short story collection of Ellison's work, featuring this story. It was reprinted by the Library of America, collected in volume two (Terror and the Uncanny, from the 1940s to Now) of American Fantastic Tales (2009). Ellison showed the f...

The master computer harbors an immeasurable hatred for the group and spends every available moment torturing them. AM has not only managed to keep the humans from taking their own lives, but has made them virtually immortal.

Classic whataboutism. There are bad things, therefore there cannot ever be any good things.

I admittedly don’t want to start a discussion, but if you consider that the institution systematically enabled and enables abuse, the poster has a point.

It isn’t whataboutism in my book when you call out a real moralist stance by a moralist in chief of a moralist institution as bigoted if the institution itself is, quite obviously, rotten to the core.

But that’s just my opinion. YMMV.

That said, it’s quite interesting to see how differently the Irish react to the pope’s current visit in comparison to the last one. I recently learned that the Irish constitution literally was first handed to the Vatican for approval, and then to parliament. Ireland, of all countries, is a good test case how times are a-changeing.

Poland is another case, but a rather sad one.

I would contend the Catholics are less bigoted overall than many other Christian factions and most/all of the fundamentalist factions.

When it comes to race and ethnicity, they have a very diverse membership. I counted 22 different flags that represented countries of origin at the church my kid was baptized in.

Homosexuality they could do a better job with, but are better overall than a lot of other churches. It honestly depends a lot on the church. My uncle is both gay and a Catholic and devoted much of his life leading the choir, playing music, etc.

That isn’t to say there isn’t room for improvement, nor that there aren’t bigots in the org, but I’d disagree with the “rotten to the core”.

The biggest issue I have with the org is the protectionism of the priests and the bishops who lead this. Though they have at least on paper changed the polices on this.

Homosexuality they could do a better job with, but are better overall than a lot of other churches. It honestly depends a lot on the church.

Agreed on both counts. The first openly gay* people I ever met in person were some guest speakers who had been invited to speak to my church youth group. (And not as part of some “ex-gay”/conversion therapy propaganda)

*That is, people who I realized were openly gay at the time, childhood naivety and all.

We’re still OK there… it only applies to humans

That’s a stupid question. He would have died eventually - and then got up and walked home.

You’re talking about the Boy Scouts? The U.S. Congress? Her Majesty’s government?