“Have you tried turning it off and not on again?”

They’ll ask the butler to do it.

Coutts client: “Wot, it won’t work? But I was guaranteed by the sales clerk that my phone would run any app in perpetuity!” 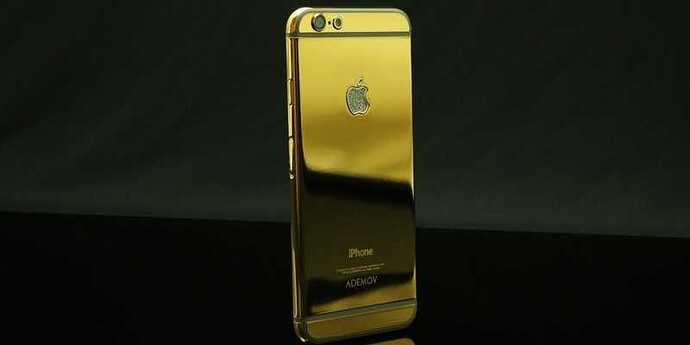 This Gold-Plated iPhone 6 Costs $7,300 And Features An Apple Logo Encrusted...

If Apple's gold-colored iPhone wasn't "gold" enough for you.

I’m a Coutts customer (ha ha, no, I don’t have £1M, bless you for asking, not even close; maybe they weren’t quite so selective when I signed up a number of years ago ¯\_(ツ)_/¯ ) and I got the little “For the love of God, don’t upgrade your iPhone” alert on my phone this morning. Not that it’s a problem for me, as my state-of-the-art iPhone 7 won’t actually run iOS 16.

I will say that their relationship with technology is … nuanced. Their new online banking website is by far the prettiest (but not necessarily the most functional) banking website I’ve used, but the rollout was a clusterfuck. There were so many problems that their 24-hour support line – which normally gets you a smooth-voiced, deferential representative on about the third ring – was unreachable for three days. The yacht-owning classes must have been red-faced with fury. They did send out a formal apology sometime after that, in which the bank’s chairman admitted that things had fallen a little short of the standard that people who could buy Brazil on a whim are accustomed to expect.

As a software developer myself, I have some sympathy with glitchy rollouts, and I don’t want to dump on their hard-working developers or IT staff. Nevertheless, I remember being slightly surprised that a bank that probably has more money in its vaults than God couldn’t get it right. And now no one there seems to have anticipated that there might just be a few little compatibility issues with the upcoming iOS release? I noticed that they aren’t even able to give a date when they expect to be able to run successfully on iOS 16. It’s just “Please turn off automatic updates and we’ll let you know. Don’t call us.”

Room for improvement, as they say. And possibly for another self-abasing letter from the chairman.

As a software developer myself, I have some sympathy with glitchy rollouts, and I don’t want to dump on their hard-working developers or IT staff

I dunno. Every year Apple updates iOS. And the betas come out nearly half a year before the full release. I don’t love the annual upgrade cycle, but that’s the world we live in. And according to devs I know there aren’t a lot of major breaking changes unless you’re using things that have been deprecated for years. So something like this is the result of ignoring years of accumulating technical debt and squandering six months to make it right.

People who bought that have long since moved on to the latest platinum and emerald encrusted model.

I remember being slightly surprised that a bank that probably has more money in its vaults than God couldn’t get it right.

The important part is keeping that money in the vaults, you see.

Coutts is part of the Natwest group, so I’m surprised their app isn’t just a re-skin of the Natwest app, with a little more dedicated customer service.

As a software developer myself,

Have you considered offering them your services to fix the app, for - say - a nice round million?

At least here in Germany it is a known issue that the digital transformation is really tough for that kind of bank and I imagine it is not all that different in the UK. In the olden days their high revenue per client allowed them to spend all the employee hours they needed to provide a premium service. That doesn’t work the same way for digital services. There the fact that usually they are pretty small by retail bank standards hurts them and means that they are struggling to keep up when it comes to the things that are the absolute basics elsewhere: websites, apps, cards etc. Of course it is even worse for independent private banks.

Really, that might be acceptable for the gaudy nouveau-riche; however, I have acquired for the new IPhone (that’s is capital I for Imperial) with is so discrete that it is invisible, inaudible and intangible.

Yes, of course. One doesn’t tend to these things personally, one has them done for one. The very thought! How droll.

Several times I have tried switching from Wells Fargo to small credit union banks. Every time, the website or app is too buggy for me to use with confidence, and I end up back with the evil juggernaut.

These smaller players have got to face the reality that most banking takes place online today and even the friendliest branch employees can’t do anything about their buggy websites.

As an owner of vintage Triumph motorcycles I suggest that the bank call Lucas electrics…they can fix it.

Several times I have tried switching from Wells Fargo to small credit union banks. Every time, the website or app is too buggy for me to use with confidence, and I end up back with the evil juggernaut.

The Cumberland Building Society in the UK manages, despite it wanting its members to have ties to the area it operates in (Cumbria, Dumfries and Galloway, North Lancashire). It is one of only two building societies that offer current accounts, and the other one is the far larger Nationwide Building Society.

The Cumberland Building Society was established on 16 April 1850 as the Cumberland Co-operative Land and Benefit Building Society. It has its headquarters in Carlisle, Cumbria, England. It is the 10th largest in the United Kingdom based on total assets of £2.5 billion as at 31 March 2018. The first branch was opened 100 miles south of Cumberland in Preston, Lancashire. It is a member of the Building Societies Association. The society offers a range of products including: savings accounts; m...

I wish I hadn’t closed my account, but I moved away before mainstream internet banking was a thing.