Went to boingboing.net and had a pop up dialog saying I may have won an iPhone which led to being redirected once cancel was clicked. 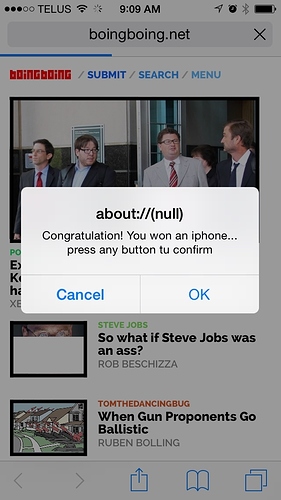 Hmm did you see this @beschizza?

That crap happened to me too.

For the record, we sorted this particular bad ad out pretty quickly, I think.

The tip off was “any button tu confirm”, In this context, should have gone with usted.

I love how it’s displayed.

“Congratulation! You won an iphone…so what if Steve Jobs was an ass?”

This topic was automatically closed after 499 days. New replies are no longer allowed.