Oh. Well, this menacing and unambiguous threat of horrific violence against civilians totally convinces me that there’s nothing wrong with Saudi Arabia’s human rights record.

Some further context is this is especially hilarious falling out since Canada has just previously sold $15 Billion worth of weapons to Saudi Arabia without a peep about human rights, or anything about the hard evidence Saudi Arabia is using the weapons to commit war crimes in Yemen.

Oh. Well, this menacing and unambiguous threat of horrific violence against civilians totally convinces me that there’s nothing wrong with Saudi Arabia’s human rights record.

Hey, they apologised. And once the Saudi government finds out who posted the Tweet it will demonstrate how civilised the KSA is by cutting off his fingers so he’ll never do it again.

Come on. Muslims can no longer post pictures of airliners without creating a “terror threat”? This is how a certain minority wants you to think.

All airliners are pointed at major cities. Sleep well!

What could be more emblematic of the spendthrift incompetence of the new Saudi Arabian regime than threatening to crash a jetliner into a radio mast?

The CN Tower is more than just a radio mast. There’s a restaurant/nightclub up there, as well as a bunch of telecommunications gear and an observation deck for tourists.

Once in a while I see a post on BB that only makes sense if, while reading it, I imagine the voice of the Comic Book guy from the Simpsons.

There has been an organised campaign of concern trolling about First Nations rights and Quebec independence, with many acciunts posting identically worded tweets. 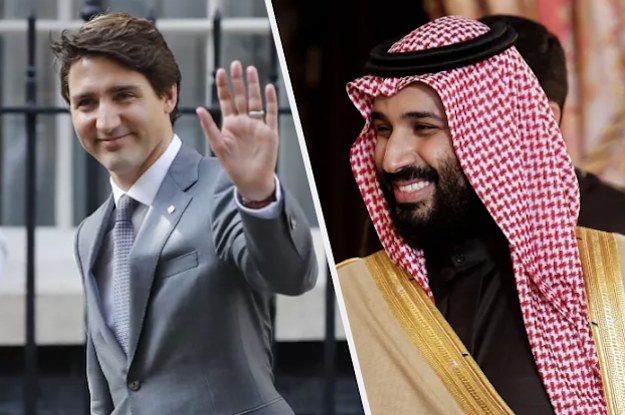 Saudi Arabia And Canada Are Fighting Over Human Rights And Quebec Independence...

And both the current Liberal government and the previous Conservative government were involved. And we have our own laws that say this is illegal. Jobs, jobs, jobs!

“Saudi Arabia is our FRIEND.”

“No, we must kill Saudi Arabia.”

“But Saudi Arabia has the precious!”

Hasn’t a lot of money that has funded groups like the Taliban and Isis come through Saudi Arabia, too? I feel like the country gets a lot of “free passes” on human rights violations thanks to all the oil and money.

Yes, Saudi Arabia is probably the worst state sponsor of terrorism, but it doesn’t get called out because they are a close American ally.

Also, the terrorists they sponsor are the right kind - anti-Iranian.

Conservative Leader Stephen Harper is referring to a $14-billion deal to provide Saudi Arabia with light armoured vehicles as a contract for “transport vehicles.” And he says such equipment can’t be considered arms.

Looks like just the “transport vehicle” for driving around Toronto.

I promise that I will not.