Also, PLEASE take a motorcycling training class like MSF. Learn the good habits, before you build your own bad habits. Do NOT learn from a friend, learn from people that know what they are doing and are trained in doing it.

As a guy who had a semi-serious motorcycle accident at age 18 – with a girlfriend riding on the back, no less – I concur with @Valgar . If you plan to drive more than a few miles on that motorcycle, or on public roads, get a motorcycle training class certification. This should be mandatory, really, along with helmets, upon purchase of any motorcycle.

(Luckily the gf got out unharmed. Me not so much, but it could have been far worse.)

I have had two near terrible incidents. One within days of the MSF class so the skills were fresh and I was rear-ended but able to keep the bike up. The other was that during a blow out on the GGBridge I remembered the info on how a tire’ll maintain shape above 35mph or so and was able to make the last 1/2mi or so to safety with some modicum of stability. With out the MSF classes taught in South SF, I’d have been woefully under prepared for both. 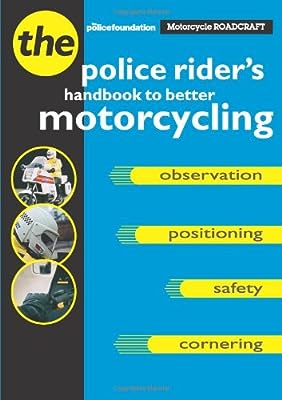 With input from police riders, trainees and civilian experts, this work is designed for police trainees and other riders concerned with getting the best from their machines. It gives information on sa ...

Helmets - you couldn’t be more right. I’m pretty economical in buying stuff, willing to spend up to the point where I get maximum utility / unit of currency, which is generally right before the “bling” jump in price.

But helmets? Maxed out. Arai GPx in sparkling white, because it passes every test internationally, you can see it on the horizon, and there are enough bad wipeouts demonstrating the technology on youtube.

I was cut up by a car turning left across my path a couple weeks ago, on my pedal cycle. 10-15mph collision, but caused the handlebar to jam on his door, effectively ceasing forward motion of the bike, pinioning the handlebars in place, brakes on hard, so I pivoted over the front like some ridiculous mannequin. Hit the deck with my head (rotational speed calcs anyone? I weight 75 kig, 177cm tall) and got a mighty thump, then in slow motion listened as every vertebra clicked in turn under the impact.

No helmet then? Hospital now, and for the next 3 months, easy. Got away with a mild concussion, and partially thanks to BB and the conversations on filming people, I took home a beautiful witness statement with a hilarious response from the driver.

No helmet, don’t fucking ride, freedom or none.

I’m surprised you didn’t know you had “greater stability if you approach a curb at 45 deg. or more”- I learned that within the first few times I tried to go up a curb on my bicycle.

I’m libertarian enough to believe that a helmet should be a personal choice but it’s only option for those of us who are in no hurry to become organ donors. Take the MSF course (mandatory in my state for a motorcycle rating on your license), take the refresher often. Bad habits have a way of coming back and you almost always learn something you weren’t prepared to learn the last time. I’m a slow learner so it took me three times through to see the flaws in my braking, cornering technique.

And skills stay freshest when they’re practiced a lot so stop reading this, throw a leg over and get your knees in the breeze.

Saying I learned, when buying my first helmet, was “If you only have a $50 head, only wear a $50 helmet.” I have an assortment of various helments for various riding conditions/events – the 3/4 helmet in the photo rarely comes off the shelf. Currently have an Arai Defiant out getting a custom art-job. Can’t wait to share it.

Nice bit in Proficient Motorcycling shows that around 30% of all hits take place on the chin with a helment. Full face helmets are a must!

I loved David Hough’s column in Motorcycle Consumer News. You might check them out as well. Their site is http://www.mcnews.com/mcn/ They are sort of a Consumer Reports for bikers - no ads, that sort of thing. Really well done magazine. Pricey by comparison to the ad supported magazines, but I love em.

Helmets, just like all our other liberties, rights, is a starting point. Once the government gets a foothold, they use it to pry more and more freedom away. I wear a helmet every single time I get on a bike. Period. Whether thats dirt, street, track, always. HOWEVER! it should be a choice.

We cannot legislate safety. Do any of you feel safer when the TSA feels ya up? NO. Sadly, once the freedoms start eroding, they go.

Yes, we can all point and say “helmets make you safer” but the moment it becomes a law? it is the officer’s excuse to pull someone over, and look for other things. Then? Well, helmets make you safer, guess what else makes you safer? Not riding a motorcycle. Not leaving your house.

Stay inside. eat krusty-Os, watch tee vee… be safe, your government is watching out for you!

Yes, we can all point and say “helmets make you safer” but the moment it becomes a law? it is the officer’s excuse to pull someone over, and look for other things.

This is the issue. Why would not wearing a helmet be probable cause for a search?

If you’re part of a health insurance plan, you pay for people’s decisions: if they motorcycle without a helmet and smash their skull open, if they’re an alcoholic or have an unhealthy lifestyle, or if they carry to term a child with significant birth defects.

If you want to be part of a supportive system, there must be ways of keeping it fair.

You want EPS (the hard styrofoam padding) in the chin bar, not just full faced. You need to absorb the impact with your helmet, not your jaw, or worse, your skull.