So you “like” what they’ve done to the thing in question, but would have to change those twelve (!) things about it before being able to really like it?

Not necessarily. It’s actually some of what I’ve done to my own '75 /6. I’m all for the beauty of a perfectly new R90S for obvious reasons, but I also enjoy that fine tuning of something to make it perfect for the task at hand. My /6 was for hauling ass on mountain roads or really anything twisty, and so I upped the performance appropriately to my needs. On the other hand, I’ve got a bigger touring bike that’s mostly stock, except for my wiring in a USB power plug for GPS/phone/camera battery charging. Please don’t think I don’t appreciate that R90S, because I certainly do, but I’m a tinkerer, especially with my bikes.
So when I go blasting by those kids (GET OFF MY LAWN) on their Hyabusas or GXRs in that scraping 15mph left hander only to lay it over into the full-throttle 45mph right hander climbing up the mountain, well then, I can do it in 1970s style.

Looks like it’s gonna need a new back tire already.

I run Pilot Activ’s on my /6. They are pretty confidence inspiring for a bike that old. How are the sports?

Mechanically I’ve kept it stock to a 75/6 but some parts are from varying years of the bike, its not all true 1975 any more. My shocks were replaced with a later year and don’t have the nice caps, etc.

I fall more into the latter category.

I can appreciate the stock people just as I can appreciate the make-it-work folks. Sometimes alterations go badly and stuff gets broken or otherwise horked, and sometimes those alterations are done sloppily or without forethought or (most commonly) both. To each her own, natch. I’ve skipped the stock part when I felt the non-stock part was better made or more efficient, but a lot of times the shop only has part X, so that’s what gets put on the bike.

And I should say that I went way beyond stock on my bike because the fucking imbecile I bought it from in Atlanta had failed to properly remove all of the old oil filter (that one little o-ring on the inside end of the two-piece filter), and two weeks later I was riding with friends when it started bogging down despite throttle setting. Bike seizes, and post-disaster inspection revealed a spun big-end bearing (and so much sparkly, gritty oil!) because of that damned little piece of rubber jammed up behind a new oil filter. Spend a few grand on a new bike only to be considering an engine change a few weeks later.

My only available action was to change the motor, since everything else was fine. Given the cost of purchasing a newly blueprinted motor from Bob’s BMW (HA!!), I went to buying old race engines and requipping them as necessary, winding up with a hot dual-plugged R100 engine in a R75/6 frame.

As for tires now, I think the Sports are my favorite tire. I’ve done Contis and they were okay, the Metzlers were pretty good on my new bike which also ran Bridgestones, but the Michelins just felt better, more sure-footed, and I got those tires worked to a fashion where I simply dropped into a turn almost without thought, as though the bike knew just how far over to lean and no more, no less. I don’t think I got the best mileage out of them, though, but that’s kinda to be expected.

New Hire Employee: “Damn – and I just waxed those floors.”

I about shit myself watching that “demo” ride. Many years ago a stuck throttle on a Honda Super Hawk led to me doing some donuts in the shop and I caused a fair bit of chaos. At first friends thought I was just showing off. 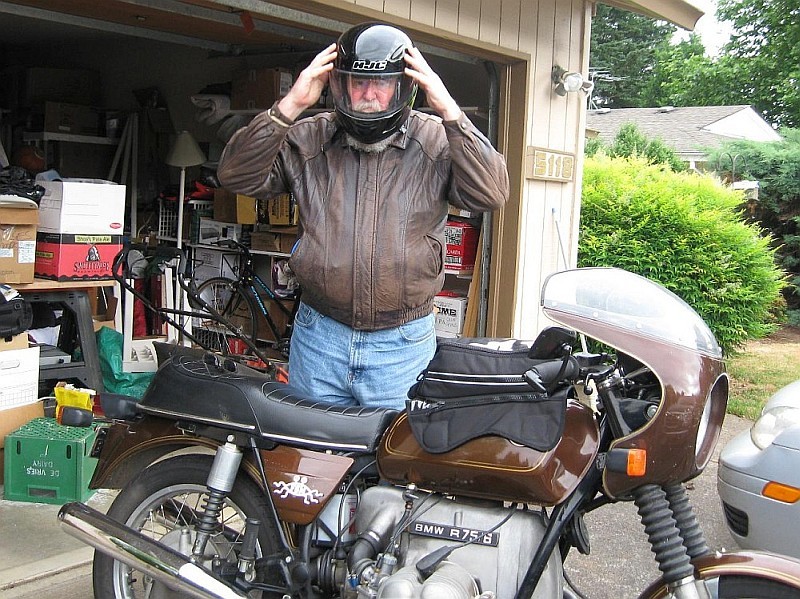