I saw the original 60 minutes segment and misread your headline: I thought he’d fallen and died… Obviously that would be horrible, but it’s what my mind is prepared to hear when I see that he’s made the news…

He capabilities are amazing, but this activity seems totally insane. His corporate sponsors, like many athletes participating in the most extreme sports, are incentivizing him to push his limits for financial gain. This makes me very uncomfortable.

Banff Mountain Film Festival has had two films on Alex - both worth seeking out if you are a fan of climbing. However, free climbing like he is doing is a short term proposition at best - especially when he is pushing on big walls like Half Dome.

I knew Derek Hersey a little when I lived in Boulder and he had been living on borrowed time for many years when he died (http://en.wikipedia.org/wiki/Derek_Hersey). I truly hope Alex doesn’t go the same way - he has amazing skill, but …

Having known Derek Hersey I’m sure you are aware that the specific activity is free soloing and that free climbing generally is done with ropes. Not making the distinction confuses the conversation with non-climbers.

Free soloists on his level don’t have a good track record, do they? I sure hope he ends up like Peter Croft, rather than a lot of the others.

Gah! I just found this: 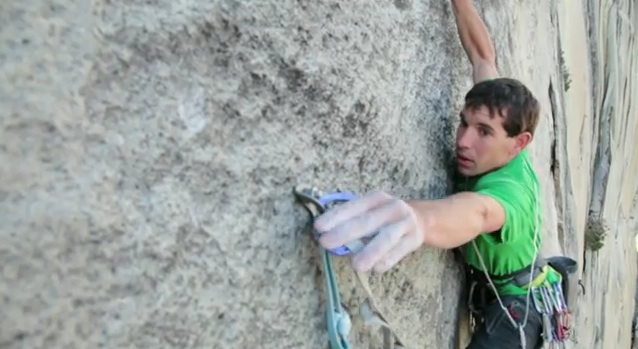 I could barely watch it.

Wow. That’s a deceptive headline, since he’s climbing roped in the vid.
(Apparently I need to watch the video and not just coment on the still frame. He’s solo.)

I don’t think he’s roped until he attaches the carabiner. It looks like he’s just using protection for that one point in the climb. And the near slip appears to come at about 1:18, right before he attaches.

Right, he doesn’t have any protection until he gets his daisy chain clipped to that bolt. And then you see him unclip from it as he moves past it at 1:38.

Thanks for the clarification - I think maybe it’s a British / US English usage, or maybe a generational thing. You are right, it’s free-solo climbing without ropes (although if I recall in one of the Banff films, Alex did climb with a loop and some pro on some of the formerly artificial sections on Half Dome).

I stand corrected. That’s what I get for trying to make the assessment off the still frame instead of actually watching the video. Obviously not roped.

All done thanks to the power of apples!

I was hoping he’d find time to say to camera:

“Look, I don’t mean to be rude but this is not as easy as it looks, so I’d appreciate it if you wouldn’t distract me.”

As an ex-climber: these kind of free climbers really piss me off.

Yes, they have “skilz”. But their antics attract media attention, and the coverage encourages other climbers with less “skilz” to duplicate their antics, with sometimes fatal consequences.

If you want to do this:

This doesn’t seem like the kind of person whose story is going to have a happy ending.

Thank you for your opinions as an ex-climber. Perhaps you would like to air them on a climbing related forum where your words would more likely reach your target audience?

Free soloing is stupidly dangerous and anyone that does it is “inspiring” lots of kids to risk their lives for “glory” aka attention.

Free soloing is stupidly dangerous and anyone that does it is “inspiring” lots of kids to risk their lives for “glory” aka attention.

The people I know who have soloed have all done so for deeply personal reasons, not for glory. I don’t know Alex, and can’t speak to his motivations.

I do think the marketing of “extreme” sports, including the fact that the term “extreme sport” even exists probably promote more of the “glory” seeking than most of the people who have participated in the activity.

I’m guessing you don’t climb Jen, but making a statement like this reads to a climber the same way the statement “Revealing exploits at DefCon promotes illegal hacking.” comes off in security circles.