Why wasn’t it just included in tuition again? Seems like the whole point was to manufacture a reason to segregate poor kids from the rest.

What blatant stupidity. Haven’t they learned anything from the PR strategies of the “gracious” wealthy? After you dismantle public funding and rebuild them as your private institutions, You still fund your “arts and humanities” projects and let everyone use them, but slap the names of the funders all over it so that they get to feel superior.

Thanks I was looking for a reason to vomit this morning.

Well what does £420 get you anyway, a swing? So then I’m assuming the balance was paid for from other sources? So this is really just poverty shaming, plain and simple.

From looking at the article, some footballs (soccer balls), skipping ropes and other sports equipment suitable for under 10s.

So this is really just poverty shaming, plain and simple.

Also in the news - one Toby Young, head of the New Schools Network of academies (for which he is paid £90k p.a. on top of being a rent-a-bellend gobshite columnist on various right-wing rags). Some bon-motes from Toby Young:

“Small, vaguely deformed undergraduates would scuttle across the quad as if carrying mobile homes on their backs. Replete with acne and anoraks, they would peer up through thick pebble-glasses, pausing only to blow their noses.”

“Inclusive. It’s one of those ghastly, politically correct words that has survived the demise of New Labour. Schools have got to be ‘inclusive’ these days. That means wheelchair ramps, the complete works of Alice Walker in the school library (though no Mark Twain) and a Special Educational Needs Department that can cope with everything from Dyslexia to Munchausen Syndrome by Proxy.”

(I’ll spare you some of the tweets about women).

Recently appointed by his friends in the government without qualifications to the new Office of Students to oversee UK universities. When his leering, misogynistic history on Twitter was revealed, the Foreign Secretary (and personal friend of Toby Young) said Young was needed for his ‘caustic wit’. The government has still not commented on his self-professed consumption of, and supply of, cocaine.

Earlier this week he stood down from the OoS, just before a story broke that he had attended a ‘conference’ on eugenics funded by an anti-semitic, borderline neo-nazi group in the US.

Previously, Young had spoken approvingly of ‘modern’ eugenics: “My proposal is this: once this technology [genetically engineered intelligence] becomes available, why not offer it free of charge to parents on low incomes with below-average IQs?”

Toby Young is still in a job that brings him into contact with children. And none of his supporters in the government (Boris Johnson, Jo Johnson and Michael Gove), or the right-wing press have condemned him for attending the conference or for his views on eugenics.

This is such on the nose capitalist bullshit it’s astounding.

You can take any opinion of Toby Young, and it will almost certainly be the opposite of his father, Michael Young.

Michael Dunlop Young, Baron Young of Dartington (9 August 1915 – 14 January 2002) was a British sociologist, social activist and politician who coined the term "meritocracy". During an active life he was instrumental in shaping Labour Party thinking. When secretary of the policy committee of the Labour Party, he was responsible for drafting "Let Us Face the Future", Labour's manifesto for the 1945 general election, was a leading protagonist on social reform, and founded or helped found a numb...

Well I think these kids have been taught a valuable lesson. The poors need to know their place, and the executive swing set isn’t it.

I think we can be pretty sure that being

head of the New Schools Network of academies

does not actually bring him into contact with any actual children. As a gob-shite journalist (just like Gove and Johnson, it is always worth stating) I am sure that children beyond his own are only an academic (pun intended) concept to be exploited for controversy in writing and money via the govt’s privatised education framework.

It IS telling that despite May’s support he finally decided to resign the position at OoS the day after receiving a call from a (student?) newspaper asking why he had attended the private ‘eugenics’ conference, but before the story broke publicly.

I (a USA resident) had no idea this public-funded / private-profit school bullshit had infected other countries as well. Over here they’re “charter schools” but it’s the same playbook. “Conservative” elites seem always to have hated public education. I’m nor sure whether it’s because they fear educated riff-raff might rise to usurp their power, or simply because they cannot stand any entity that doesn’t line their pockets. Whenever you hear the fashionable phrase “public-private partnership” this is what is meant: the taxpayers (except for the corporations and the 1% of course) pay for it, the wealthy scoop up the profits, and the alleged beneficiaries get screwed.

In my US state, the publicly funded, privately operated schools aren’t allowed to keep students out based on test scores, but they are allowed to discriminate based on “attitude” and “willingness to learn” which is understood to be a proxy for “has educated, gainfully employed parents”.

They also have figured out clever tricks like not building cafeterias, so they aren’t required to participate in school lunch programs, so they can keep out anyone who can’t afford to bring a bag lunch, tiffin or bento every day.

And they’re sometimes built in low income areas, which keeps property costs down. Such schools really don’t have to worry about the high crime in impoverished areas since the state will end up devoting extra policing resources to keeping them secure at no cost to the school, after a (school orchestrated) flood of calls is made to local politicians. But they can claim to be servicing the underprivileged because of their location, even though not one child from the local area is allowed in the door.

You can make a rule that says everybody gets the same playground, that every school has to have a caf, that nobody can use entrance exams, and these people will figure out some new dodge. The function of segregating educational opportunity is to provide better educations to those that need it the least.

This is the reality of charter and magnet school systems. They are intended to segregate, they are designed to “skim the cream off the top” and raise a generation of voters who have had no real contact with anyone other than their own intellectual and social class. In areas where the poor are disproportionately people of color, these systems are a bulwark of structural racism, and yet completely legal.

So if the equipment is just balls and jump ropes and crap like that what happens when the privileged kids, perhaps ignorant of where their playground bounty came from, invite the poor kids to a game of kick ball or double dutch? Does an adult step in and put the kibosh on the activity, explaining to the wee ones why they are wrong to share their toys?

Privilege has its rank.

Oh FFS!
It would be cool if the parents who didn’t pay built one of those free-range “junk” playgrounds for free and then excluded the posh kids. 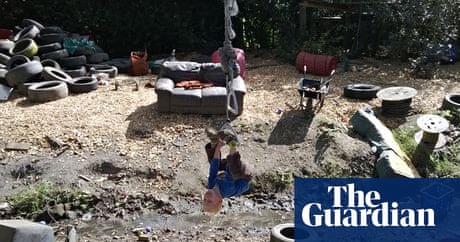 Is this the perfect playground, full of junk?

An experiment in north Wales lets children – and adults – experience the boundaries of truly free play. Is it madness or a model for the future?

Sometimes I wonder if I’ve drifted into an Octavia Butler novel.

The function of segregating educational opportunity is to provide better educations to those that need it the least.

Very nicely stated! That sums up the charter vs. public school mess going on in USA right now perfectly.

A new Gilded Age is upon us.