Both Nadya and Masha have made it clear they are no longer members of Pussy Riot, and the current members of the Pussy Riot collective have acknowledged that and in fact have formally criticized Amnesty International for ignoring this and using the Pussy Riot name to further their fundraising goals. 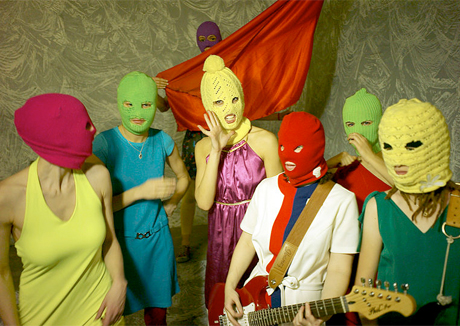 For the past two years, we've been referring to incarcerated Russian protesters Masha Alyokhina and Nadya Tolokonnikova as members of the pu...

I’m glad the band continues with new members in Russia. I think they are going to do more good outside Russia instead of getting sent back into the gulag for 20 years, which was probably explicitly spelled out for them when they were released. They still aren’t exactly safe.

I was pretty skeptical when the first pictures of Pussy Riot were circulating several years ago. The photography of their protests was stunning, and even when they were being manhandled by Russian security, the women looked fabulous. It looked like some sort of viral marketing campaign I was looking for some of these older photos, but I’m only seeing new stuff.

They are safe until the Olympics end, or a terrorist attack happens - whichever comes first.

Both Nadya and Masha have made it clear they are no longer members of Pussy Riot,

Maybe so, but they’re far less clear when asked about it in this press conference. They address the question of whether they’re still in P R at about 24:00.

What’s the overlap between Pussy Riot and FEMEN?

What’s the overlap between Pussy Riot and FEMEN?

Maybe, conventional attractiveness that tends to overshadow whatever cause it is that the activists are actually fighting for?

You have been taken in. This is another “Western” anti-Russia campaign. But? Oceania has always been at war with Eurasia.

BTW: These young women were disowned by the “real” Pussy Riot.

Why didn’t you boycott the Salt Lake winter Olympics? The Utah anti-gay statutes are more onerous than those on the Russian books. In Russia, sodomy was decriminalized in the '90’s…

Neither are current members of PR - the others kicked them out due to participating in capitalistic activities and appeatring on stage with Madonna. Personally the second reason is enough to kick anyone from your group.

Whatever statutes may be on Russian books, the abuse of gay people there is currently far, far worse than in the U.S., and even in Utah.

Yes, the embrace of these two women by Madonna and other corporate forces is deeply suspicious, but there’s no need while pointing that out to also ignore horrific realities actually occurring in Russia. “A hunting season is open and we are the hunted,” says one victim left blind in one eye after being shot at for attending a party with other gay men

There are more than 37 groups all over Russia of a gang called Occupy Paedophilia, who link gay men to paedophilia and set up meetings with them on social media by pretending to offer friendship before beating them up.

In one horrific scene the St Petersburg branch of the gang trap a gay man and then pin him down in a flat before beating him up and then videotaping him admitting he is gay on camera.

Asked if he will lose his job when the video goes online, the crying teenager says: “Yes, I think I will.”

Another gay man named only as Dima, tells how he was left blind in one eye after being shot at for attending a party with other gay men. He said: “A hunting season is open and we are the hunted.”

Neither are current members of PR - the others kicked them out due to participating in capitalistic activities and appeatring on stage with Madonna. Personally the second reason is enough to kick anyone from your group.

Wait, what? Me? What makes you think I went to Salt Lake City? Did you click reply by mistake?

Mod note: BBS is supposed to be a welcoming environment for women as well. Removed sexist comments.

Thanks for signing up to make that one comment. Helps me realize who’s most likely promulgating “propaganda” here (i.e., you).

Bravo!! Thumbs up! and other appreciative words to make this comment long enough for bbs to post.

After every other form of sex has been mainstreamed, heterosexuality will still be the last taboo for liberal blogs.