“You can make projects and build community that harnesses that positively. The same way bad actors can look at QAnon and find a playbook, so can good actors. We can find similar ways to motivate alienated people in a more constructive way. At least I hope so.”

Would this not be organized religion? Is not the concept of organized religion the principal of harnessing something unseen and unreal for “good” (however one might attempt to define good). Various people are able to obtain standing in the group, there is a text to study and debate, there are gathering and celebrations that need to be tended. You are “in” or you are lost.

So many Q morons would never play an ARG and probably think ARG’s are a stupid waste of time, and yet here they are unknowingly enrolling in one and loggin in to play every day.

I don’t know what make me fear the most: think this is an ARG or HOPE this be an ARG!

Would this not be organized religion?

I was just going to chime in with that. The discussion of QAnon as an ARG opens up further exploration of cults as ARGs, which leads logically to organised religions (especially the Abrahamic ones) as the biggest, longest-lived on-going ARGs in human history.

They didn’t have the Internet and social media, but go to the library of any college’s theological faculty and you’ll see millions of pages of debate, cherry-picking, exclusion of dissenters, community building, attempts to reconcile reality with a fictional universe, etc. covering millennia.

It’s an ARG… but with brain damage!

Except, unlike a game, this is doing real harm to our country right now…

Yes!
The gamification of polarization.
Political binary has rendered us all mere 0s and 1s.
All in the Quantum Age no less.
Complacency is such a thrill.

Are they granfaloon or karass?

Do they actually know their wampeter?

"What concerns me is that right now it is quite easy for bad actors to see what has worked with QAnon and try to copy it.

Bad actors like, I don’t know, QAnon? Or people who try to normalize them?

Game, that’s what I like to believe two dear friends of mine are in it for, so I don’t, let’s just say, despise them.

I’d argue the American response to 9/11 would count as an earlier example.

“What concerns me is that right now it is quite easy for bad actors to see what has worked with QAnon and try to copy it. There’s a playbook now. Any groups can hijack it. It wouldn’t take a lot to try and replicate it.”

I would argue GamerGate was the progenitor of QAnon.

Also, how can Russia not be deeply involved in the QAnon rumor generating and rumor propagating process? It’s pure gold. They have a fervent segment of their adversary’s populace willing to believe anything and to share those beliefs widely. As an agent of pure chaos and disruption, they’d be negligent to not be involved in the process, somewhere, helping it along. Yet, there have been no exposés on this subject. I’m curious why not. 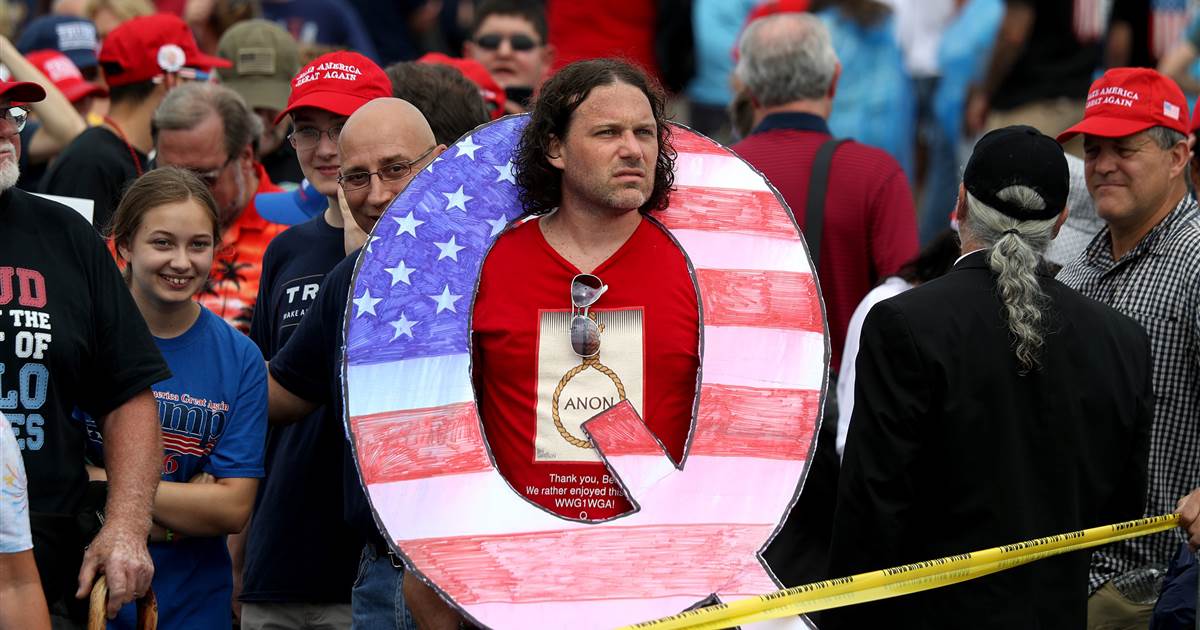 Who is behind the Qanon conspiracy? We've traced it to three people

Pushing the theory on to bigger platforms proved to be the key to Qanon’s spread — and the originators’ financial gain.

The reason suggested here is that, America is so suffused by actual fake news, Russia doesn’t have to create it as such any more. They just amplify it and help it along.

This Q coverage here makes me a little ill. It may be “collaborative” in a secondary way, but the theme and details are fed by individuals, or interests in the guise of individuals. I defy anyone to make the case that “exposing” a worldwide political conspiracy of luciferian child murderers isn’t inciting violence. It most certainly isn’t a game.

"Snyder, the former Homeland Security official, agrees that conspiracy theories may in fact inspire violence and be a threat, but questions what the government is going to do about it.

He notes that at the Department of Homeland Security, “nearly all, if not all, the intelligence analysts focusing on domestic extremist groups” were eliminated under the Trump administration. “There is no one there doing this,” he said."

I wish Qanon will be treated with the seriousness of the moment. We are one major event away from it becoming pretty obvious. It should already be, given the incidents thus far.

No, that’s probably the protocols of the elders of Zion… this is a modernity problem, not an internet problem.

Qanon is fundamentally different from an ARG in that people actually believe that shit, and, as @Mindysan33 pointed out, the game has real life consequences on people who never consented to be affected.

I find the central questions unanswered: what the US learn from ARGs that helps them deal with Qanon nutters and avoid similar shit in the future. My guess is: nothing, because the problem that people can be “gamified” into Qanon cannot be solved through more gamification, the appropriate response lies in an entirely different category: it’s about education, community, participation (economically and politically), fair distribution of wealth, social justice. Major obstacles: capitalism, a culture based on violence and revenge, exceptionalism, religion.

I’d argue the American response to 9/11 would count as an earlier example.

There’s also a significant difference in the order of magnitude of the impact. At the moment, I can’t imagine how 20 years from now Qanon will have a discernible impact on hundreds of millions of people. Maybe that’s hard to see from within the US, because the refugees from the aftermath mostly avoid the US, so there’s little chance to meet them around town and listen to first-hand accounts.

Qanon - much like people hallucinating about having been abducted by aliens - is entirely a domestic problem of the US, it is not a relevant phenomenon elsewhere.

Do they actually know their wampeter?

That would be ignorance and batshit-craziness, and the Dunning-Kruger effect would indicate they’re unaware of that.

Qanon - much like people hallucinating about having been abducted by aliens - is entirely a domestic problem of the US, it is not a relevant phenomenon elsewhere.

I am kind of tone-deaf to sarcasm, so was that sarcasm? Because it is certainly false.

Can you explain in what way this is false? I am not aware that there is a significant number of Qanon cultists outside the US. Or do you mean the alien abductions?