Look, god. I know we don’t always see eye-to-eye. That whole eye-for-an-eye thing and all that.

But, please, don’t let a rich white silicon valley guy buy this and put it on display in the office of his startup…ok?

Yeah. It would be nice to see these treasures returned to Japan and displayed in a museum.

Nice. When I was in NYC one of the museums had a huge Katana collection on display. I could get a decent functional one, but I’d love one of the vintage or modern ones hand crafted by masters.

But, please, don’t let a rich white silicon valley guy buy this and put it on display in the office of his startup…ok?

Why not? Given the half-life of most startups, it will be a temporary stay anyway.

You can occasionally buy pretty decent antique ones for sums that aren’t absolutely insane. I’ve seen antique blades that cost less than the one I had commissioned. With a relatively inexpensive antique, you’re not going to get one from a famous maker etc…, but you won’t be stuck with a gunto or other garbage if you’re willing to shell out $1k+ for the blade alone. Keep in mind that fittings etc… are also not cheap if you want to go with antiques or modern custom made ones.
As you note, there are also a lot of great modern swordsmiths that do amazing work. Scott Slobodian, Michael Bell, Jesus Hernandes etc… come to mind first. Oh yeah, and there’s that Yoshihara guy, but unless you’ve got $30+K to drop on a sword from a Japanese national living treasure…

(sorry folks, I’m a bit of a blade/sword/metal enthusiast)

As you note, there are also a lot of great modern swordsmiths that do amazing work

To be honest, if I was rich, Silicon Valley or otherwise, I´d probably do that.

But the ultimate would be the Hattori Hanzo…

My dad has a decent mass produced WW2 katana blade which was probably given to a recruit by his family. The inscription on the tang says something like “bring honor to your family and nation” or something.

He said he also had a chance to hold a real blade and he said it felt alive in his hands like it was saying “Who’s ready for some mayhem? Let’s have some real fun!”

Oh man, shut up already! Why is it you sword guys always have to talk about how cool your sword is?

Yeah. It would be nice to see these treasures returned to Japan and displayed in a museum.

Not all blades would be candidates for repatriation. I think there was a real effort to recover priceless blades captured in WW2 that were otherwise going to rust in someone’s garage in Iowa. But blades would not have the spiritual importance of something like Sitting Bull’s skull. but I’d hate to think of one wasted on some doofus with a Lambo who’s read Musashi and thinks he’s a Zen warrior poet. And some of this stuff will probably end up over at Larry Ellison’s house, the one modeled on a 16th century japanese palace. 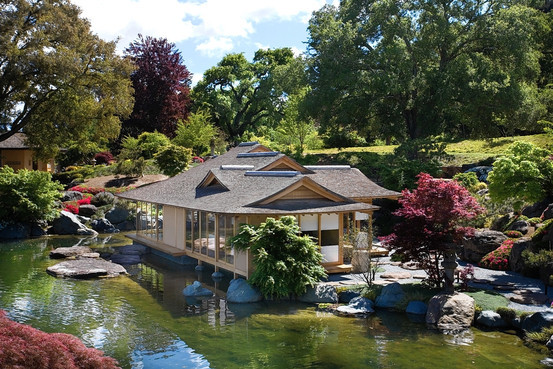 I’m not sure I understand your meaning. Are these blades unique? Are there museums in Japan that have massive holes in their collection? Do you own stock in the Japanese tourism industry?

It barely met the estimate of $150,000, but the description contained a lot of “signifiers”-- provenance, exhibition history, certifications, literature…

I don’t see this sort of attention to detail on any of the lots on this auction.

I’d beg to argue the “spiritual significance” bit. To the families that had their swords taken these are very important relics. I don’t think there’s a good comparison, but maybe to western (and christian) minds, the value would be akin to an antique family bible. There’s the whole “the sword is the soul of the samurai” thing, and while most modern descendents aren’t that fanatic, a sword can be a very important family heirloom.

I have no idea if these blades are unique, or the circumstances under which they left Japan. There are a lot of swords that left Japan in less than scrupulous ways, and returning them to their owners (or at least to a museum) would be a good first step.

A similar situation would be the general looting of Egypt that most of the colonial powers seem to have partaken of. If Egypt were more stable (and in my mind could safeguard these historical treasures better), then I’d argue that a lot of the stuff both privately owned and owned by museums outside of Egypt should consider repatriating these artifacts.

The 1945-1952 US Occupying force wasn’t as clean as it should have been, but there wasn’t widespread looting of “national treasures”. Heirloom swords resided with the remaining nobility, and certainly couldn’t have been stolen by marauding GI Joes for several reasons:

In other words, this wasn’t the Red Army in Berlin.

Was armor this ornate typically used in battle, or was it more for ceremonial purposes? Seems like it would get awfully expensive to have to take it in to the master craftsman for repair every time some opponent knocked the gold dragon off your helmet in a fight.

I believe it was all functional until about 1,500. Despite the generally austere Japanese aesthetic, these guys liked to go into a fight gussied up to beat the band. Then they started adding metal plate to resist matchlock muskets.

Scholars agree that Japanese armour first appeared in the 4th century, with the discovery of the cuirass and basic helmets in graves. It is thought they originated from China via Korea. During the Heian period (794-1185), the Japanese cuirass evolved into the more familiar style of body armour worn by the samurai known as the dou or dō, with the use of leather straps (nerigawa), and lacquer for weatherproofing. Leather and/or iron scales were also used to construct samurai armours, with leathe Ja... 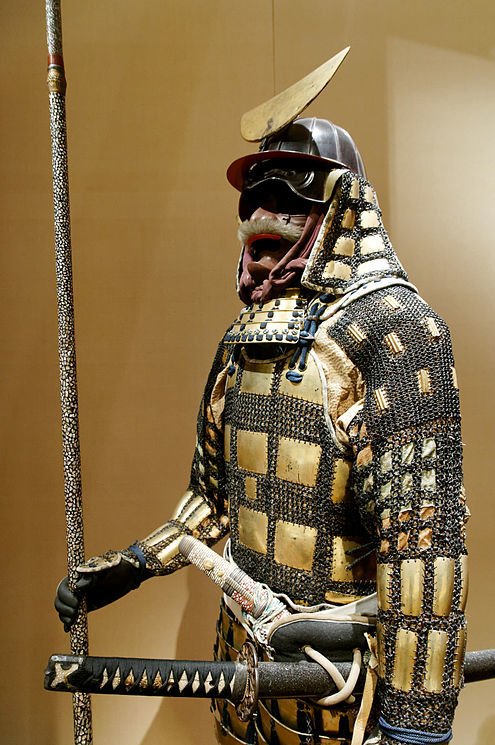