Sure wish I had one of Percival’s time machines to bring me back to the late '50s, '60s, and '70s and re-read all those great books for the first time.

(And I’d bring extra money, due to my foreknowledge of comic inflation – first one I bought was a dime; then 12 cents; by the time Fantastic Four debuted the price was up to 15 cents!)

(And I’d leave a note to future self to leave them all in a better spot than the attic when I went off to college. ::sigh:: Freshman year ruined when mom threw them all away : -(

What sucks is they have no Shadow Comics. I did get a DVD from someone who had a bunch of scanned comics, but haven’t looked at them all. Decent quality, though. I am guessing Conde Nast is keeping the copyright up, even though they are doing nothing with them? They appear to be doing the same with the pulp novels, but those are at least findable in reprints.

BUT - it looks like they have all the archived radio shows. So many of those were lost to time. You can hear Orson Welles in the first season as Lamont Cranston aka The Shadow!

Note the plots are much simpler and tamer than the pulps. Margo Lane was introduced through the radio program, and she is very much the stereotypical “damsel in distress”. And the radio Shadow behaved differently. He had the “power to cloud mens’ minds” and more or less be invisible. Which translates well to radio, as he is an invisible voice, literally, on the radio. In the pulps they used colorful language of him melding into the shadows, or a shadow seemed to creep long the dark street, eyes seemed to burn with fire, etc. Colorful language that made for good reading, but didn’t translate into a literal power.

I think it’s great someone did this but it’s just not the same as having the comics in your hand. I know that sounds pretty obvious but the best part of the comic book experience to me is the tactile stimulation of having actual paper in your hands with stories designed with you in mind.

They have The Spirit. I’m happy. 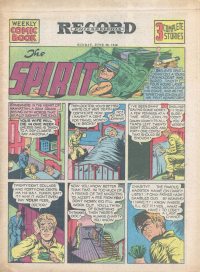 This book has 16 pages and was uploaded by dsdaboss on June 1, 2017. The file size is 12.65mb. Publisher is Register and Tribune Syndicate: The Spirit