Does anyone have any recommendations for recipe tracking/cookbook programs? My old paper folder system needs updating. My requirements: 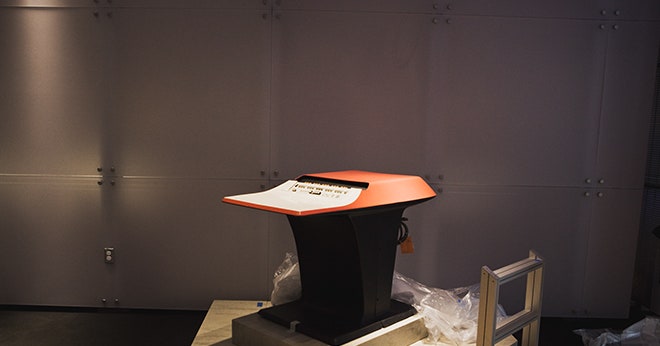 Before the iPad, There Was the Honeywell Kitchen Computer

In the winter of 1969, the Neiman Marcus Christmas catalog offered to computerize your kitchen. Cooking up a gourmet holiday meal will be a snap, the department store promised. Push a few buttons, and — presto! — a shiny orange-red, white, and black... good luck in your search. I’ll be interested in what people suggest as well. It makes me think that, if there isn’t one already, it would be great to have a web standard like iCal or vCard for recipes to facilitate recipe sharing across clients.

Well, you could kludge WordPress into doing it :- D

Edit: the more I think about it based on your list of requirements, I actually think WordPress would be a good fit for what you want to do. It’s got built-in WYSIWYG/html editing for posts, including ordered and unordered lists. You can insert hyperlinks and photos. You can host your own local version on a PC or mac or you can host it using remote web hosting and access your WordPress files through remote hosting of your choosing and access and edit your files anywhere on any platform. It has a built-in search feature, and you can categorize your posts with single or multiple categories. You can undoubtedly find a theme that is well suited for recipes. And you can add custom CSS and interface plugins for additional formatting functionality.

Oh, and it’s open source and free as in “no cost.”

There seems to be something called BigOven?

I did something like this on TiddlyWiki years ago.

you could kludge WordPress into doing it

I can make WordPress do almost anything I want it to, but I think that falls into the category of “just because you can, doesn’t mean you should.”

I had started scanning my folder full of paper-- which is substantial, probably 300 pages, some of them irreplaceable or very hard to find-- but quickly realized I was just kicking the can down the road. Better to solve it correctly, right up front. I spent some time yesterday going through the Google Play store and wasn’t impressed with what I found. I’ve got another week of FMLA time, so maybe I’ll roll my own. It seems like there might be a market for it.

It’s cloud based, so fails on that criteria. That’s fine for collaborative projects, but this is all my data, and too much work to trust storing it on someone else’s computer.

I can make WordPress do almost anything I want it to, but I think that falls into the category of “just because you can, doesn’t mean you should.”

I mentioned WP because it is a doable kludge, leveraging an existing database front end that is free and can do what the OP asks.

what options would you suggest?

Well, my professional life is trying its best to force me to transition to purely executive functions, but I remember my roots and I still do some coding. I was never a database guy-- more of a generalist-- but I know my way around. It seems like a nice little project, and perhaps one that might be able to make me some money. That’s always a good thing. And I could use some Android experience.

Making an interactive WordPress installation that behaves similarly on mobile and in desktop mode can be done, but it’s not a project for the faint-of-heart. The details will sink you. Doubly so if the UI is at all complicated, which this would be. But I agree, if one were not a programmer, a WP setup would be one way to approach the problem.

And I’m pretty sure I know exactly what the OP wants, since I am the OP.

And I’m pretty sure I know exactly what the OP wants, since I am the OP.

I’m using my wiki environment for this (sort of … 90% of my recipes are in text files or 2-3 very large Google Docs right now).

Not because mediawiki is the best solution for recipes but because I’m already transitioning my personal information to mediawiki. It does meet your list of requirements for some degree of YMMV but pretty much does require learning another markup language. The limitations I’ve read for the markdown plugins sound limited enough you’ll almost definitely need to use at least some wiki markup.

(All this reminds me it’s time to do a backup.

I keep all my recipes in Evernote. I can save to local and share across multiple platforms, including mobile. It indexes nicely, has folders and tags, and I use the web clipper to grab interesting recipes online whenever I see one I want to try. I use my iPad as my cookbook, propped up in a folding plastic stand and zipped into a gallon size ziplock bag to keep it clean.

I’m using my wiki environment for this

Hmm. I hadn’t considered that option… but it might work! I use a modified version of WikidPad for technical notes, so no learning curve for the Wiki markup language. I was originally thinking of something more template-y but a Wiki might work.

See. Because of this proper attitude we avoided the WordPress/recipe apocalypse, with the requisite lab coated and aproned html editor decrying: “They were too worried about whether they could, they never wondered if …[choke, die]”. Thank you @RatMan for saving the future.

Don’t get too excited. I may do it in WordPress anyway. I like WordPress! But it really pisses me off that WordPress.org deliberately advertises themes as “free” when you have to pay through the nose to get a version that actually does what they say it does. I don’t mind paying for the things I use, I just hate it when authors conceal the fact that I need to pay. How hard would it be to add a line something like “free version is feature-limited; pro version is $49.”

It meets all my requirements except the second in the list. The database is stored locally on each device, but syncing between devices is done through their server. Syncing can also be done manually through email or sneakernet, so while not perfectly optimal, I can live with it.

It has a really kick-ass recipe import function. One-click import from many of the popular recipe sites, and it’s very clever about importing from other random sites. It has a built in web browser (Chromium based, apparently) and the ability to print and email recipes. It has a decent but not spectacular search function. It also has internal meal plan and grocery list functions that I haven’t used yet.

Pricing is quite reasonable: $19.99 for the Windows version, and $4.99 for the Android version. The Android version is eligible for Family Library. Demo version available for Windows but not Android. Mac, iPhone, and iPad versions are also available, as are versions for Kindle Fire and Nook.

One other very nifty feature is built-in kitchen timers. And the recipes are interactive-- you can check off ingredients as you use them. Useful for the “did I put the salt in or not?” situation. Also single-click auto-scaling, which is kind of nice.

All in all, I’m pretty impressed. It would take me six months to write anything this good myself.

And the recipes are interactive-- you can check off ingredients as you use them. Useful for the “did I put the salt in or not?” situation

This topic was automatically closed after 146 days. New replies are no longer allowed.