I don’t do round storage dishes. Square ones are way more efficient use of space. There are some similar types of products out there that are square and rectangular.

A big plus: they are oven safe. (At least the ones we have.) So you can bake and store.

They freeze beautifully. I have a bunch of 'em, square and round, and love them. 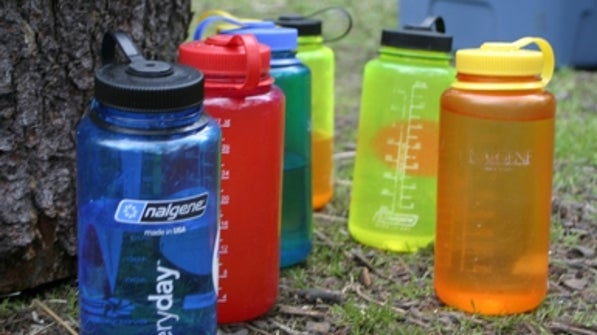 BPA-Free Plastic Containers May Be Just as Hazardous

But, yeah, that aside, we’ve switched to these, especially for taking food to work so’s we don’t have to microwave the plastic…

Bought a bunch of these last year. They are great, but the kids soon broke sbs chipped them so we went back to plastic.Will buy again when kids are older.

Do they stack nicely when empty? Mine don’t, and it’s really annoying – they take up much more space “stacked” and they get stuck together. And then there was the time I knocked a couple off a shelf…

So, I’m pulling a pan out from a low shelf and I accidentally dislodge a pair of the mid-sized bowls that were stacked together nearer the front of the shelf. The shelf is low, so they basically upend and fall together, maybe a foot or so. Shit, I think. They’re stacked, and they’re hard enough to pull apart normally, but now they’ve been sort of hammered together. Then I notice a small glass shard about a foot away from them on the floor. Well, double shit, one has a chip and is probably now sharp on the top somewhere. I spend about ten seconds contemplating what to do about the glass chip when the top bowl explodes into pieces across the floor in all directions. I jumped back and none hit me (they didn’t travel very far), but would have been a different thing if my first reaction had been to reach forward to pick them up.

I hate to tell you this, but you got the wrong ones. Pyrex makes a glass lid series that uses baking silicon for the seals (ie, almost no surface area in the dish touches something that isn’t glass, and baking silicon isn’t known to have any interaction with food, unlike plastics, even the BPA-free plastic Pyrex lids). 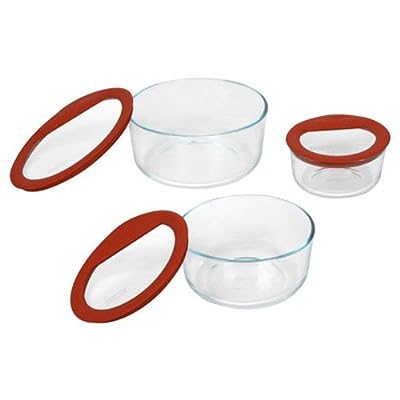 For now, just make sure you don’t heat the lids around food, as in, don’t put them in the microwave.

I use wide mouth glass canning jars and my FoodSaver with jar attachment. The jars are cheaper, the lids last through multiple uses (for storage of leftovers in the fridge), and the shape is more efficient in the fridge.

I’ve got a bunch of these (and some of the earlier versions of the silicone lid ones). Well, I should say I have a bunch of the bottoms. The tops all cracked and tore, rendering them pretty much useless.

Several decades ago, the Pyrex brand was all made of borosilicate glass. Now, it’s just “glass”. Even though they advertise it as oven-safe, it must be heated and cooled slowly. With the borosilicate, you could take a hot dish out of the oven and set it on a wet spot on the counter, and it would not crack from the temperature stress.

Is it the old style “good” Pyrex or the new style “explodes in your kitchen if you use it like old Pyrex” Pyrex?

Because an affiliate link to the latter seems like a bad idea.

Our household hand washes these types of storage dishes all the time. Round is much more efficient for quickly cleaning, as square/rectangular dishes frequently cause water to shoot up/out/onto clothes when trying to clean the corners of the dish.

Is it the old style “good” Pyrex or the new style “explodes in your kitchen if you use it like old Pyrex” Pyrex?

Be sure to use a trivit. Don’t set hot glassware out of the oven on a cold or wet stone counter top. Don’t pour cold water into hot glassware.

Yup, it’s a shame that they sold the name and these are just plain glass (the same as Libbey). This also affected all of their casserole dishes. I’ve long used French White casseroles and like everything to match. The old French White was glass and pure white (it matches my bone china dishes) while new French White is stoneware and grayish. Of course, the old type was able to go from freezer to oven, the new has to be handled like stoneware.

Be aware that putting the lids in the dishwasher (the top rack) will discolor them over time. Mine started out smooth and blue and now have an ashy coating - I think they have been degraded by the soap or heat.

This, exactly. They also tend to leak. I quite like the snap-lock ones. They have a pretty spillproof seal.

We have an outlet mall near us with a Corelle store, which includes the Pyrex line and a few others. Easy peasy to pick up extra lids. Just be willing to have mismatched colors!

Pyrex also makes these in rectangles, so no excuses.

We have some of the older Pyrex at my Mother’s house. That stuff is basically indestructible. Not only does it not explode from thermal shock, but its survived dropage, getting hit with metal utensils, improper use by children, and a dozen other things. I’ve never been able to figure out why they’d want to change it. The old stuff is almost as durable as metal cookware.