Did anyone else stare at the photo in the article for a while trying to find the clown?

Better hope its not this guy: 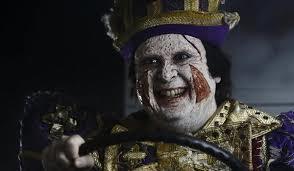 “…riding the property…” would be a colloquialism(?) to mean “vigilant patrolling of the premises”

But you and I know that, and get it.

The person who wrote the copy went “[sic] happy” if I may coin a phrase.

The way the paragraph is directly quoted, rather than paraphrased, and liberally sprinkled with editorial markup to call out both real and imagined linguistic mistakes, gives away (to my sensibilities) that the copywriter wants us to be sure to notice that the person who wrote the note is an ignorant hick.

Evil Clown? That’ll be a quarter in the pleonasm jar!

No shit. The Joker is actually the least evil of all clowns.

This raises the rather meta prospect of clown impersonators. Clearly this is an industry in need of a robust certification exterminaiton authority.

I think the implication is that to be a clown, you have to go through training; to wear clown clothes, you just have to visit a costume store.

Don’t forget selling your soul. Not to Satan though, Satan wouldn’t touch clowns with a ten foot poll. He does have some standards.

There was a similar bit with Jack Nicholson’s Joker in Batman.

regarding a clown or a person dressed in clown clothing

That’s a distinction without a difference.

And is the editor a bit heavy-handed with the _[sic]_s? Exactly what is grammatically wrong with “children’s safety”?

Maybe he was luring them into clandestine grammar lessons.

I say we nuke the woods from orbit. It’s the only way to be sure.

I just wanted them to see my woodland circus.