What is the fetish of that first one? A shattered neck? Hot.

I see the appeal in several of the others. As far as fetishes and Japan go, these seem refreshingly “normal”.

Was chikan already a problem when Harukawa drew his subway dominatix pictures?

Chikan (痴漢, チカン, or ちかん) is a Japanese term referring to sexual harassment or other obscene act conducted against the victim's will, or a person who commits such an act. The term is frequently used to describe men who take advantage of the crowded conditions on the public transit systems to grope people. While the term is not defined in the Japanese legal system, vernacular use describes acts that violate several laws. The neologism referring to the corresponding female chikan is chijo. In clin...

I have a feeling he’ll be remembered fondly by both Sir Mix-A-Lot and Robert Crumb.

I’m guessing the cause of death was asphyxiation.

It always restores my faith in humanity when someone beats me to the punch. Profound thanks:

May he forever be smothered in peace.

“Then he gave himself over to that hand, and in a terrible state of exhaustion he let himself be led to a shapeless place where his clothes were taken off and he was heaved about like a sack of potatoes and thrown from one side to the other in a bottomless darkness in which his arms were useless, where it no longer smelled of woman but of ammonia, and where he tried to remember her face and found before him the face of Úrsula, confusedly aware that he was doing something that for a very long time he had wanted to do but that he had imagined could really never be done, not knowing what he was doing because he did not know where his feet were or where his head was, or whose feet or whose head, and feeling that he could no longer resist the glacial rumbling of his kidneys and the air of his intestines, and fear, and the bewildered anxiety to flee and at the same time stay forever in that exasperated silence and that fearful solitude.”

Different fetish entirely. This darkness is all about bottoms.

Sure but it made me think of queening: 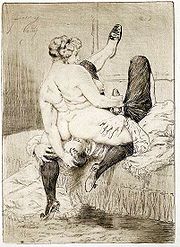 which can be either.

I’m guessing the cause of death was ass-phyxiation.
FTFY

I guess this is safe for work seeing we’re all working from home… OH SHIT THE KIDS!
“… when two grown ups love each other very much… something, something… special hug”

Ack - how has no one else posted this yet?