However, the fine might need to be increased in order to act as the correct signal for the diners

And that’s why the penalty for drinking a human toe is now $2500.

If children are not socialized to behave appropriately in grown-up spaces they will never see the need, and the culture will evolve to accommodate screaming grown-ups wearing pajamas in public.

It seems like a slightly douchey way of going about this. If it were really about other customers’ comfort they could just say “sorry, no kids”, and I think a majority of people – including parents – would appreciate the clarity, even if it put them off going to that restaurant.

I doubt that anyone actually gets fined (except maybe in extreme cases). I think it’s more about creating a clear expectation that the kids should behave and making it less awkward for staff to intercede when kids get out of hand.

However, the fine might need to be increased in order to act as the correct signal for the diners, so that this fine doesn’t turn into a fee for behaving badly:

I don’t think that’s a risk in this case. Fines can turn into fees when the party being wronged is the one collecting them and so the fine is perceived as offsetting any harm done.

But for the “screaming parents” fine it’s clear that the harm being done is not to the restaurant, it’s to the other diners. And instead of offsetting the harm done the existence of the fine is actually emphasizing that the fine exists.

Just imagine how embarrassed you’d be if you were there with kids and got the fine. It’s basically a formal proclamation that you created a miserable experience for all the other families.

This should be universal. You chose to have children, you deal with them.

A bit harsh, but as a parent (albeit my kids have nearly launched) I saw it as my responsibility to make sure my kids didn’t negatively impact the experience of other diners. If one started being loud or obnoxious, I would take them outside or to the restroom hallway, if it was removed enough from the dining room. Once they settled down, it was back to the table. With that system, I’m pretty sure no one was bothered. It was a pretty rare occurance, in any case.

You are civilized, and so are your children. /salutes

Far too many parents and their children are not. I’m being harsh because too many otherwise pleasant evenings out have been spoiled by…well, spoiled people.

Do you live in Rockville, Maryland?

it wasn’t so much screaming children as children using tablets playing games at the table with the volume set really high.

Exactly this. We, too, went out to eat at our favorite Thai place a year or so before Covid. It was the only place I felt comfortable dining in because they didn’t have loud music or a damn TV. Then a couple of women walked in with a 4-5 year old, and instead of engaging with the child, the women handed off a tablet to the child and chatted (drank) amongst themselves. The kid put the effing sound way up. Grrr.

Just imagine how embarrassed you’d be if you were there with kids and got the fine. It’s basically a formal proclamation that you created a miserable experience for all the other families.

Yes, any normal human would indeed feel shame long before being handed a bill for screaming larval offspring, and would have dealt with the problem before it reached that stage. Unfortunately, the concept of “normal humans” doesn’t encompass the ones creating the problems. You’re assuming that they or their spawn understand the concept of “shame”. It’s never even been put into their thick, dense skulls, where the only feelings they have are greed and entitlement.

These Karens and Chads know they can be shitty and get their way and they don’t even have to feel bad for being an asshole. Since their worthless parents never taught them to feel shame for being a selfish ranting prat, there’s zero internal disincentive. These people don’t feel embarrassment; instead they feel victorious like they’ve “gotten away with it” or they “won”.

$10 certainly won’t make them feel bad, either. The most reaction you can expect from them is anger at the accusation implied by the surcharge, followed by belligerent demands to be comped free drinks for their pain and suffering.

This is in the entrance line in a casual fish place where I live. 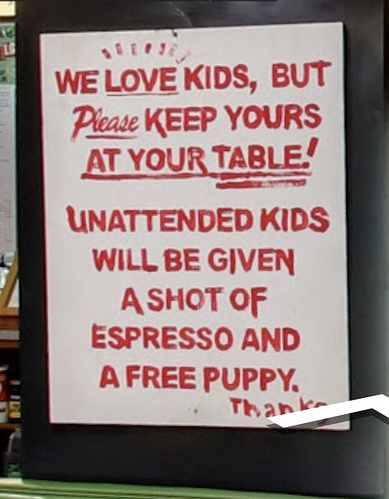 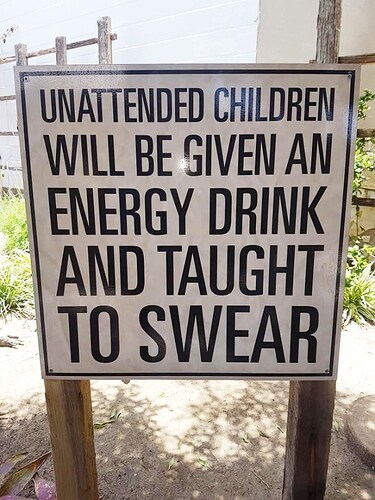 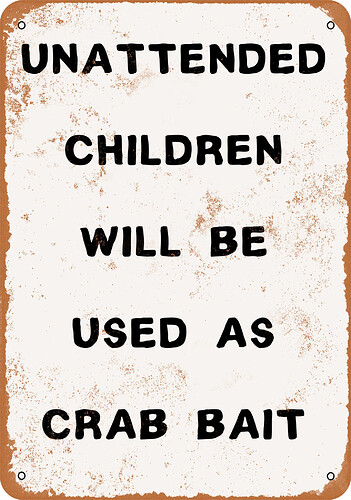 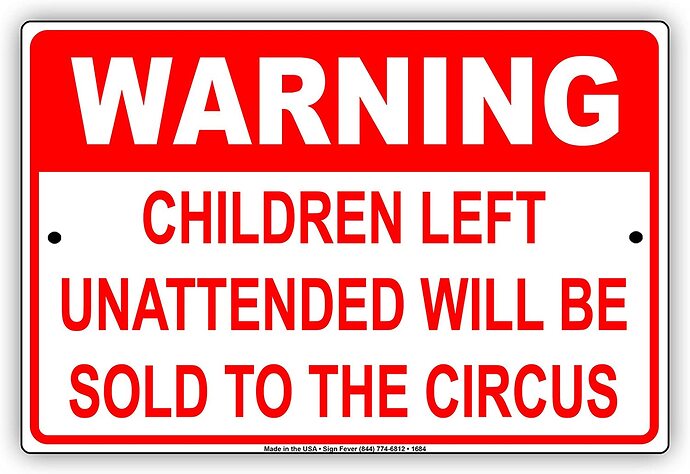 If I were a kid, I’d think that last one was more of a promise than a threat!

I looked at that last one a long time, then said to no one in particular, “I probably would’ve turned out better had I been in the circus.”

We didn’t take our daughter to a real restaurant until she was old enough to not disturb others, before that it was Chuck E Cheese type restaurants where playing was the name of the game. Fast food restaurants were also good practice for sit down places. We were very lucky that our daughter never really did the running and screaming in public.

But… there was that one Christmas Eve when she was around 4 where she had the mother of all tantrums. We told her to knock it off or Christmas was over, we gave her one warning that we were serious, she didn’t stop so we packed up, went home, and put her to bed. We enjoyed a quiet Christmas Eve at home.

You really only need to do that once. We got grief from family members about ruining her Christmas but it was an excellent teaching moment. She did have a fine Christmas morning and what an angel she was by morning.

We have kids on our street that are allowed to scream for the sake of screaming, drives me nuts but not much I can do. Wish I could fine the parents. The only time I do say something is when the kids are swimming in the lake, screaming when you’re in the water is not cool. Us adults freak out when we here kids in the water screaming.

we’d feed the kids at home and just order them desert to come out with our meals.

That is flippin’ brilliant! Damn, I wish I’d heard of that years ago!

If one started being loud or obnoxious, I would take them outside or to the restroom hallway, if it was removed enough from the dining room. Once they settled down, it was back to the table.

Yeah, it’s a great deescalation technique. They’re understandably overstimulated and just need to be helped coming down to human level. I once got the stinkiest stink eye ever from another dad because I think he must have thought I was spanking my son when I took him out to the parking lot to chill out. Dude had a freaking nanny with him, too.

That’s a great opportunity to ask the waiter to send over a shot of Malort to the other table! Order a shot of iced tea for yourself and salute them so he has to drink it.

One of the last dining experiences I had pre-covid was with a cousin I had not seen in year, and we ate at a well known BBQ place - and man - it was LOUD. And we had to talk loud to talk - making it all worse…

Surf Lifesaving Clubs and Returned Services Clubs double as fairly popular venues for a cheapish pub meal over here, and most of them have rooms with transparent walls and a couple of Playstations, toys, and some beanbags for the kids. Works pretty well to let the kids entertain themselves in a noise-dampened environment while being supervised.