Revealing essay on Peter Thiel on his undemocratic beliefs

Showing that they will turn on you as soon as it suits them. He could have changed his politics- Thiel ain’t changing being gay. Even if he says he has - it won’t matter.

He’s fine until he no longer has money.

Or until he “gets out of line”… They can always take the money from him.

Again most US billionaires live to a ripe old age. Bloomberg - Are you a robot?

“Thiel was/is doing the right things to survive within the fascist state that will otherwise persecute those like him.”

Despite his politics being antithetical to theirs, he’s had no curtailment of his freedoms under the Obama or Biden administrations.
There is no indication Thiel is motivated by survival, if he were, helping engender fascist leaders who happily use gay people as scapegoats would be a dumb move. It’s more likely he’s funding (fascist) people who make life easier to be an oligarch. Don’t credit him with thinking he has to do this to survive, when it’s much more likely he’s doing this out of greed and desire for power.

It’s because a lot of Americans have learned that only their liberty matters, not anyone elses. Once you accept that it is only a small step to “those people are taking away my liberty by existing”.

I remember reading an article by a libertarian in the pre-Trump times, asking why there are so few transgender libertarians and arguing that it is in trans peoples interests to be libertarian. At the time I answered that it was because any trans people who would be interested tend to lean towards libertarian-socialism (the evidence for this goes back to 1920s Berlin) and that has a very different view on liberty.

Now, right-libertarianism and the auth-left are indistinguishable from fascism, and there are a lot more trans libertarian-socialists watching those extremes trying to work out when and how they will attack. The big problem is that we now have to make alliances with groups we don’t trust, as they are also pushed away by fascism.

And he won’t make waves, say, when his marriage is criminalized.

He’ll just bunk off to New Zealand if his dream state in the US becomes personally inconvenient.

We have South Africa to thank for both Thiel and Musk (*). It’s like apartheid is the gift that just won’t stop giving.

(*) And to those who say that Musk doesn’t seem quite as evil as Thiel, I say, give him time. He’s heading that way.

Not that left-wing authoritarianism would be acceptable either. Once you’ve started heading down that anti-democratic road, it’s time for you to go.

I’m also curious: which left-wing authoritarian figure in America do you see posing a fraction of the threat to liberal democracy in the U.S. that Thiel does? If you can’t name one, you might want to qualify the above statement.

Ultimately, both economic ideologies end in forms of neo-feudalism. Also, large-L Libertarians see right-wing populists as natural allies in defending capitalism from what they all see as “creeping socialism”. The former care as little about social justice as the latter, although they’ll phrase it slightly differently (“all lives matter” as contrasted with “white lives matter”).

That said, Thiel was always a fascist pretending to be a Libertarian.

I tire of people whose main claim to fame is that they were better than the others at the feed trough in pushing aside the decent folks. Having a pile of possessions does not make you a better person; it only makes it more likely that you’ll burn in hell.

the zentrum must flow 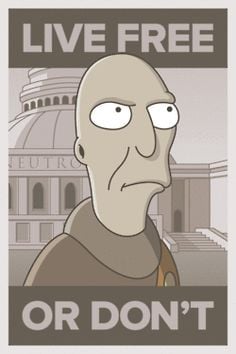 Huh, turns out a guy who makes a fortune funneling federal funds into projects surveilling everyone isn’t actually a fan of freedom.

"If conservatives become convinced that they cannot win democratically, they will not abandon conservatism. They will reject democracy.”—David Frum

Or until he “gets out of line”… They can always take the money from him.

The thing about an authoritarian state is that at the top levels, there really isn’t a “they,” just a bunch of "me"s that are all perfectly willing to shiv the rest of them to claw themselves to a higher position or pre-emptively shiv somebody else looking to replace them.

The first part of many cons is persuading the mark that they are part of the con, not the mark.

Not that left-wing authoritarianism would be acceptable either.

While I do agree that it would also not be acceptable, we’re not under a threat from left-wing authoritarianism right now. This may as well be saying that we wouldn’t want a fire in the garage while the kitchen is already on fire.