The use of actual newsprint as a medium shows that right-wing propagandists are as eager to con elderly people as any other petty grifter. The zombie newspapers are essentially temporary versions of the on-going Epoch Times newspaper scam. 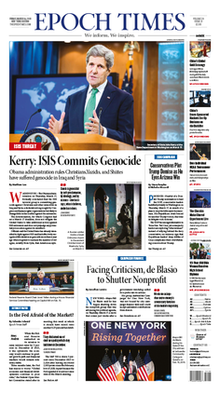 The Epoch Times is a far-right international multi-language newspaper and media company affiliated with the Falun Gong new religious movement. The newspaper, based in New York City, is part of the Epoch Media Group, which also operates New Tang Dynasty (NTD) Television. The Epoch Times has websites in 35 countries but is blocked in mainland China. The Epoch Times opposes the Chinese Communist Party, promotes far-right politicians in Europe, and has championed former President Donald Trump in...

I get these from the Left too. 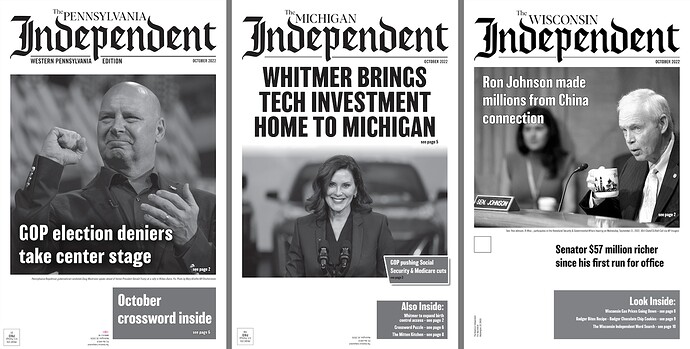 Newspapers with a partisan aim filling the void of traditional media

As independent local papers collapse, a new industry is being fueled by ideological donors seeking to further political agendas.

I clocked this for what it was the instant I pulled it out of our mailbox, absolutely despicable. This needs to be outlawed.

We’ve been getting them in Illinois for a while. They’re filled with easily disproved lies, but yes, I’m sure some people believe it. The biggest one on the “front page” for a while claims that eliminating cash bail will mean you can murder someone and be immediately released. Oh, and putting in worker protection will raise your taxes $2100 immediately. Mind you, that’s more than many downstate homeowners pay for their entire bill.

Both completely unsourced and unsigned.

Free speech is great, but there should be some penalty for bald faced lies intended to confuse and deceive.

I read that article. It seems that the important distinction between publications leaning either left or right would depend on the accuracy of the information put forth. There was quite a bit of detail in the article which indicated that the publications leaning left had actual verifiable reporting and reporters, and placed an emphasis on accuracy and not misleading readers. So…not so much both-sides-are-the-same at all.

No, no, no… don’t you know that both sides are equally as bad! /s

I immediately thought of the Epoch Times. We got a “free” sample of the Epoch Times in our mailbox last year. I immediately chucked it in the garbage. I don’t know how to combat this, other than trying to educate people. If these were actually funded by political campaigns, they’d be required to identify themselves as political ads, but they’re just incredibly biased publications of misinformation. Too bad we can’t just ban unsolicited mail completely.

It seems that the important distinction between publications leaning either left or right would depend on the accuracy of the information put forth.

Agreed. But, regardless of the quality, on the subject of “political propaganda posing as local news circulating across country”, it’s not just the Right wing distributing propaganda disguised as local news.

While I wouldn’t extend this one point to make the case that “both sides are equally as bad”, when it comes time to make that case, it will help to maintain intellectual honesty.

it will help to maintain intellectual honesty.

And in this case, one side is using this format to literally overthrow democracy. THAT fact matters here. We would not say that FDR’s use of radio with his fireside chats is in the same category as Goebble’s use of the radio to target Jewish Germans. Yes, both are a form of propaganda, but one is seeking to promote programs that helped people and one was seeking to promote genocide. That distinct actually matters.

Also agreed. But that distinction wasn’t made in this article. It simply said the Right wing is spreading propaganda disguised as local news. I was simply saying the Left does this as well.

I’ll gladly concede the Left’s propaganda is more honest and less destructive. And perhaps it would have been worth adding that to my original comment.

But that distinction wasn’t made in this article.

Well, hopefully, we can draw that conclusion for ourselves, given the evidence in front of us.

Bothsiderism isn’t helping our current situation, and in fact will continue to make it worse. We have to understand the threat that currently exists, and stop excusing it away by noting how the democrats use the same propaganda. Yes, talking about the larger structures matter, but so does talking about the specific goals of the two parties right now. People’s lives are at risk and we really should not lose sight of that in our rush to treat what’s happening as an intellectual debate, rather than a lethal threat.

I don’t think I can get on board with that. I’m not ready to abandon intellectual debate in favor of picking up arms. Or maybe you’re proposing a third option.

So, bothsiding it, when it’s very one-sided, plus the real reason they’re saying anything: they would like to keep their tax exempt status, thankyouverymuch.

But, regardless of the quality, on the subject of “political propaganda posing as local news circulating across country”, it’s not just the Right wing distributing propaganda disguised as local news.

the publications leaning left had actual verifiable reporting and reporters, and placed an emphasis on accuracy and not misleading readers.

In other words, they were legitimate journalism, not propaganda.

Propaganda is not necessarily inaccurate. It’s just information that furthers an agenda.

I’ve gotten two of these things delivered to our house in the past weeks, under different names. They didn’t even make it inside, they went into the bin along with all the other political ads that have been flooding the mailbox.

If that is the point you’re trying to make, you need to use a term with more neutral connotations. “Propaganda” has a long history of being used to reference biased, manipulative Newspeak.

Propaganda is not necessarily inaccurate.

The problem is that you are conflating “propaganda” and “cherry-picking”. The stories from the right-wing rags appear to be full-on propaganda…no byline, no sourcing, and even if not baldfaced lies…written in a way to promote fascist ideals contrary to the health of society. The left-wing ones are fact-checked according to one of their editors who is public with her byline. Even so, journalism educators feel that this tactic of promoting articles about left-leaning events is still suspicious, because the ratio of flow of information is skewed.

So still somewhat destructive. How so?

I’m not ready to abandon intellectual debate in favor of picking up arms.

Who here said anything about piçking up arms?

What are you actually prattling on about, mate? Maybe show us all of your cards, eh?