only around 10 graves in the US with recipes on them.

These headstone recipes would make a fantastic cookbook

Albeit quite a short one.

Nice idea though. “I’ll take my secret recipe to my grave”.

Pass, on the off chance that the recipe is what killed them.

The recipe on my gravestone will use weight, not volume! And in metric, damnit!

And do it in Hebrew. 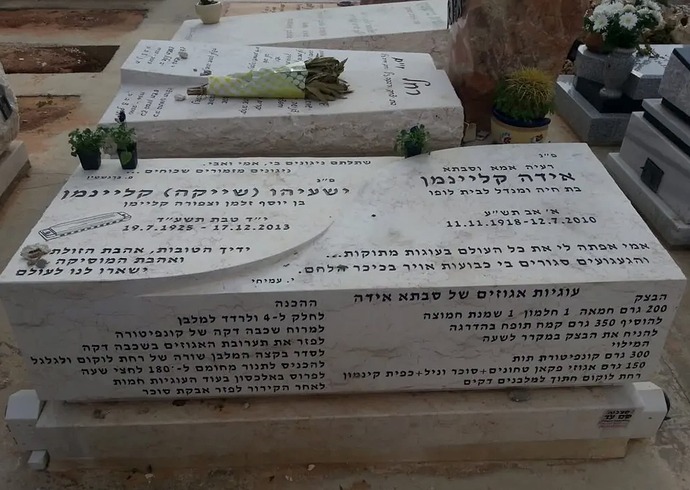 she mentions there’s “about 10 in the U.S.” but her feed seems to show more than that. is she repeating them? aside from that, i’ve heard of most of the things shown – in fact, the spritz cookie recipe is almost identical to my mom’s recipe. i love this project. i hope she does do a cookbook some day, including info about the person where she found the recipe. it would be a nice way to memorialize that person, assuming the person’s family is ok with it.

Now I want to change my instructions to include a recipe for a Man o’ War, my current favorite cocktail.

Take it to your grave.

She’s also mentioned that people in her comments have hinted at more that she hasn’t been able to find info for online, so maybe she’s started accumulating some previously unreported ones?

Edit: Her feed also seems to have a bunch of general ‘interesting graves/graveyard stories’ in addition to the recipes.

Now I want to change my instructions to include a recipe for a Man o’ War, my current favorite cocktail.

brilliant! i can get behind this idea as well. literally carve in stone that the only martini is a gin martini, and i like to have the HELL shaken out of mine.

If nothing else, this is a great way to prevent squabbles among descendants about who makes a traditional family recipe the right way and who doesn’t, like my Mom and her sisters do about Grandma’s Swedish meatballs.

OR, someone more devious could start family squabbles by changing the recipe that’s on their marker. Either way, seems like a lovely memorial.

This family was baking ON A GRAVESTONE.

Well, a nice slab of marble is perfect for candy making.