Welp, this does not sound good. 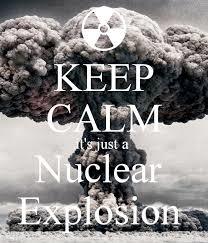 The slight silver lining is that Russia has said the plutonium will not be used for military purposes.

Of course they are capable of lying. I think its better to note that 40mn people just took part in a “civil defense” exercise. Its not their lips I am reading but their actions.

Nobody wants a nuclear war. However some states may feel that they have no choice but to respond in a certain way to certain acts by other states. You know, like the way WW1 and WW2 started.

The Russian Foreign Ministry says they’re responding to “unfriendly acts” by the U.S. The sick diplomatic burn comes just two days after Washington announced a suspension of talks with Russia on how to end the ongoing violence in Syria.

Really? Syria? We are going to fuck things up because of Syria?

See, under a President Clinton, this would be a serious diplomatic issue, possibly leading to international sanctions.

Under a President Trump, this would be met with praise for Putin’s bold leadership. Problem? What problem?

You know what? I’m getting sick of this tit for tat bullshit. Shut them down, then. If they want to run the show, let them. See how they fly…

Remember back in the day when we had a “Cold War”?

If they want to run the show, let them. See how they fly…

Mmm, and by whose measure is “successful running” defined?

There’s plenty of twisted perspectives out there.

Hope is absent here…like your dad!

Probably outside the scope of this tiff, but it could be bad from the perspective that they supply much of the US’s demand for radionuclides used in industrial/medical/research applications…

I pray this gets resolved before the elections, when we’re guaranteed a historically hawk president. The Supersonic Low Altitude Missile or SLAM was a U.S. Air Force nuclear weapons project conceived around 1955, and cancelled in 1964. SLAMs were conceived of as unmanned nuclear-powered ramjets capable of delivering thermonuclear warheads deep into enemy territory. The development of ICBMs in the 1950s rendered the concept of SLAMs obsolete. Advances in defensive ground radar also made the stratagem of low-altitude evasion ineffective. Although it never proceeded beyond the initial design and te...

What hasn’t the world fucked up because of tensions in that area?

This might be a quite reasonable approach for Russia to take. After all, how much collaboration would you do with a country that may be about to elect the short-fingered orange one.

Under a President Romney, we would have maintained focus on Russia as a geopolitical enemy.