But Russia is not Soviet. Was there a revolution I missed? Are they Stalinist again?

I thought this looked familiar - and found it.

The game was covered here some time ago:

Queue: a game in which 1980s communist Poland shopping lines can make or break...

See more photos at Wink Fun. The history of Communism intrigues me. I have traveled to and worked with game development companies in Russia, China, and Hungary. When I was growing up, I visited the…

I thought you guys broke up.

Does the game end when you come down with the flu?

Not if you make your health roll. But that gets harder as you get older!

Keep in mind there are different versions. I like the Revolution variant best, but I haven’t played the new one with Putin in it…

I stood in line for hours to get mine.

But Russia is not Soviet.

Nonsense. “Soviet Union” is just the propaganda name for “The Russian Empire.”

You can be certain that folks in Poland remember this when they look at Russia’s recent re-invasions of Ukraine and Georgia.

Haha, good luck getting them to change it, Russia. Poles HATE the Russians. Want to tell a Pole a Polack joke? Just make it about a Russian.

Are they Stalinist again?

Haha, good luck getting them to change it, Russia. Poles HATE the Russians. Want to tell a Pole a Polack joke? Just make it about a Russian.

Can’t we just give Poland to Russia? We’d make Russians happy and we’d get rid of the Poles in one swoop.

Noooo. The Poles are probably the most independent and freedom loving people in all of Europe.

Yes, they even have a very active pro-life movement, and the prime minister proposes a total abortion ban. Just last week the government announced that they will not accept asylum seekers from Syria.

I concur, Poland’s values regarding freedom and independence are very similar to the US.

It’s hard to completely condemn a whole nation because of not taking in some Syrians. Pre-WWII they were one of if not the only European country letting Jews immigrate in.

But looking at the big picture of their history, not just a few snarky examples of modern times, they have been in a bad strategic position between Russia and Europe and yet survived and thrived through it all (even times where there technically wasn’t a country called Poland). They had an active resistance movement, government in exile, and one of the most renowned squadrons of WWII (flying for the British). The Solidarity movement helped push over the crumbling Communist Regime that toppled over into the rest of Europe.

For sure they aren’t saints in all areas, but I’d never support giving the Poles to Russia - AGAIN. We did that after WWII, completely fucking over the Poles. 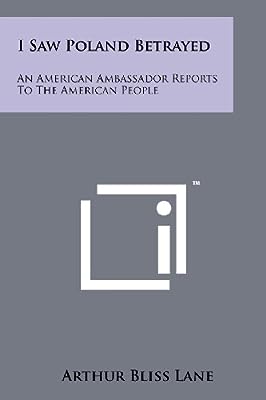 I Saw Poland Betrayed: An American Ambassador Reports To The American People

My comment was not meant as support for @shaddack’s proposal but more a general remark: Most likely selective perception, but when an US citizen uses phrases like independent or freedom as argument I can be nearly sure that I will disagree.

That one ends when you mysteriously develop Polonium-210 poisoning.