But for what purpose? I’m not naive and money is power but this seems Bond villainesque. Sorry if that’s insensitive. It’s scary stuff

He’s trying to keep his moron political base happy by waving his dick around and pulling dangerous Jackass stunts while other countries tell him to stop.

I get you. It’s all about power for him. He needs the world to realise he’s there but still he seems intimidated by China.

It’s all about waving dicks. Hasn’t it always been?

I don’t think it’s about money. If I had $200-billion stashed away I’d immediately give up half of it if I would no longer have to worry about running a nation-state like Russia. But of course part of the reason he has to stay on is that he stole that money from the Russian people. 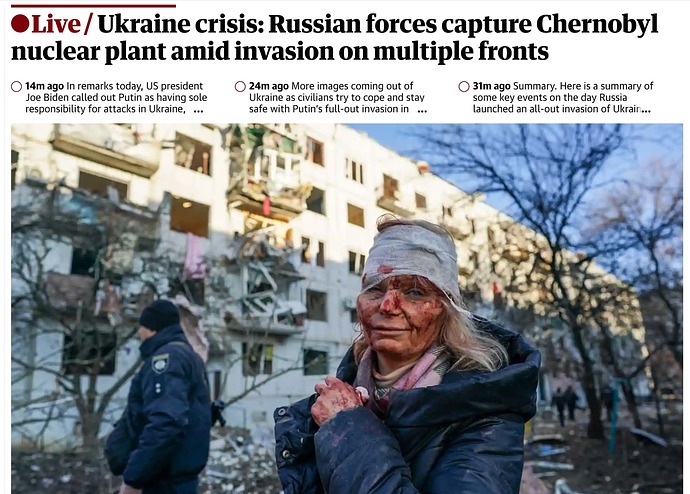 “This is a declaration of war against the whole of Europe,” Zelensky said.

I’ll believe it when I see it.

So, this gets a little woo very fucking quickly, but there’s some passage in the book of revelations or somewhere that says something about the wormwood spilling blah blah blah end-of-the-world.

The Russian word for wormwood is ‘chernobyl,’

These are dark days. Keep positive…?

On the contrary, it means those European countries that have been happy to suck on Russian gas rather than build robust energy systems - hello Germany - and those that don’t directly burn Russian hydrocarbons, but are vulnerable to global energy markets - like the UK - are going to be switching their energy mix as fast as possible.

Natural gas has just become an unreliable source of energy for any industrial economy that doesn’t meet their entire demand from domestic supplies - which is pretty much just the US, Canada and Norway.

Russia has shown itself that it can’t be relied on to be an honest and reliable energy provider, it’s time to cut it out of the world economy. It will take a few years, but Russia has just condemned itself to even more economic irrelevance, because it makes nothing that we need or want. And that is a tragedy of squandered intellectual genius that Russia has been for the last 100+ years.

To get what he wants out of NATO/EU, to make Russia a great rather than regional power once again, to prove that he can, to make good on his threats…

And looking for patterns or meaning in translations of translations of stuff that was written hundreds or thousands of years ago isn’t super useful or meaningful, though I understand the impulse to find order in chaos.

So, this gets a little woo very fucking quickly

Yeah… how about not doing that, as it just feeds into the right wing apocalypse fantasies.

Perhaps that book publisher back in Byblos shouldn’t have invented the Anthology Edition of Collected Woo after all.

If only there was some pre-existing ambient force in the area which would slowly damage any hostile occupying army.

literally one errant (or well-placed) 500lb bomb could destroy a decade of work and $2.5 billion