Russian militant leader: evidence of MH17 shootdown shopped, he can tell by the pixels

Photoshop is for hacks. Real artistes use whiteout and airbrush.

That way, no one can see “the pixels.”

He is obviously hoping for some sort of sponsorship deal with Adobe before he can call Photoshop “advanced”.

I guess that means if someone Photoshopped the words “Donetsk Republic” onto a map of Ukraine it would be fake!

No, I can’t see. But maybe I’m not rolling my eyes upwards enough.

I “like” that gif as much as anyone, but thank you for taking that slapworthy goober’s animated face off the front page.

I heard he cheated by tattooing his answers onto the inside of the top of his empty head.
Light is supplied by way of the ear holes and different encryption routines allow many data sets to exist simultaneously in the eerie, chthonic scratchings.
He literally has an answer for everything; one comically overacted eye roll away.

Real artistes use whiteout and airbrush.

Makes a mess of the screen, though.

So, hopefully anyone who wishes to understand this man’s remarks will bypass the snarky summary and the childish and not at all relevant GIF. Crap sites like Newsmax or Drudge or Limbaugh run this kind of buffoonery all the time when they catch Hillary Clinton or Obama in some awkward photo or video grab. It’s pretty damn middle school. The tactic is the Dean Scream. You take something out of context and hope that the rabble bite on it instead of the issue at hand.

The remarks of Borodai are entirely reasonable and he makes a very convincing case for his position. To mock him for suggesting “Photoshop” (which he doesn’t) or some advanced image editing software is clownish and naive. It is well documented that all intelligence services in all nations resort to disinformation, manipulation as a matter of course. Why is it unreasonable for Borodai to assert this? It’s not.

No credible person can assert in 2014 that the US, NATO, Ukraine, and allies are not regularly involved in fabricating data to suit their needs.

From what we have seen by now, it looks likely that an air to ground missiles shot down this plane, I would be an idiot to deny that. I even agree that it is probable that the Donezk rebels fired it. But it is still far from proven, days after bb jumped onto the western media train claiming that it was.

And all snark and stupid invented headlines added won’t paint over the fact that this is treated as another media hype here, and not so much as as matter of critical reasoning (which is bb’s repertoire too when it comes to matters of mass surveillance, civil rights etc).

Which I find rather inappropriate for a matter that could eventually lead up to a military conflict between the US and Russia. They treat everything from the Russian side with ridicule, while taking every US statement at face value - I’m not impressed by that kind of journalism.

Those actually watching the BBC video will also notice that some are now accusing the rebels of gathering the passengers bodies to slowly, where some days western media, including bb, fervently insinuated they were doing it too quickly… well, it’s hard to be a parrot when they teach you new lines every day.

I absolutely would not put it past US/NATO/Ukraine to shoot down a plane in order to further their agenda. It’s not like those entities don’t have a centuries old established pattern of mass slaughter and deception.

If that is the focus of Boradai’s remarks, I’d say his assertions are sound. Not proven. But still, well worth raising.

But yeah, always disappointed when the comments to “articles” like this run to “funny GIF man is funny.”

I don’t think the two suggested scenarios are equally plausible: Putin supplied rebels with missiles who were trigger happy and then blabbed about it on intercepted phone calls is a lot simpler than a massive conspiracy between NATO and a nearly dysfunctional Ukrainian leadership to kill innocents and blame Russia. Occam’s razor : it’s far simpler that Putin and/or the rebels fucked up, than NATO/Ukrainian plotters executed their conspiracy perfectly.

Thanks, standard_earl. That needed to be said.

unshaved, the rebels aren’t shooting any air-to-ground missiles because they don’t have any air power. There are many different kinds of missiles, and “air to ground” is the least likely culprit.

some_guy, the suspected missile systems were manufactured in an arms factory in Ukraine. I think the factory was in Donestk. A decade or two ago, that was one of Ukraine’s exports to Russia, a fact which is utterly ignored in the ‘media’ these days. The Ukraine army is said to have had four or five of these systems, in the area, on that day.

By the way, BoingBoing, this is a time honored propaganda technique. Find the dumbest looking representative of the the group you wish to denigrate. Then play the tape on endless repeat. The animated GIF is ideal for this purpose. In olden days one had to depend on hand drawn caricatures in editorial cartoons. Way to feed the war machine.

If anyone is interested, Dmitri Orlov has written some nice essays on the war effort: 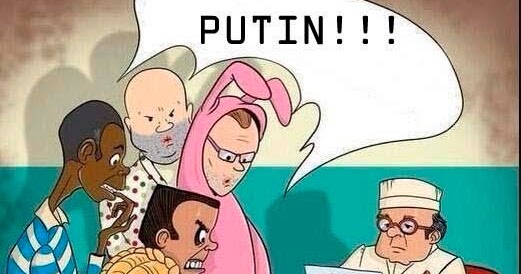 The fog of war that has been hovering over eastern Ukraine has now spread to the shores of the Potomac, and from there has inundated ever... The Americans are finding out the hard way that a fact-free zone is not a comfortable place to inhabit. The initial knee-jerk allegations...

I’d give anything claimed by either side a long hard look before believing it, but assuming the plane was shot down by a SA-11, and no-one on either side is disputing that so I’d take it as being likely (but not proven), then it’s more likely that the missile was launched from the eastern side of the country, simply due to the location of the crash site.
If the missile was launched from the western side it’s extremely unlikely to be able to hit an aircraft at 33,000 feet at that distance, and you’d be seeing damage at the rear of the aircraft, not the front. On the other hand, a standard intercept trajectory from separatist territory would fit the one indisputable fact - the location of the crash site - quite neatly.

Mmm. I missed the days of cold war conspiracies and propaganda.

Hard to evaluate those assertions without a map.

And the boundaries on that map are fuzzy dynamic things. We know where the crash site is, but where were all the SA-11s that day? All of them, from all sides of the conflict? Where was the boundary at that time? Without a clear picture of that information, it’s hard to say.

In my opinion, the separatists might have fired the SA-11 and hit the plane, but they would not have had a very long time window to accomplish this, as the plane was fast, high, and crossing a rather narrow slice of separatist territory (and, yes, you’d need a map to evaluate that assertion as well). They are clearly interested in shooting down planes, because the Uke army has been using planes to drop ordnance on their neighborhoods. If the Ukes fired the SA-11, it was either a screw-up or a cynical war crime.

In any case there is little to no evidence that Russia had any part in this drama on their front lawn. If Russia could have prevented it, they would have, wouldn’t they?

fast, and high? SAMs are designed to shoot down supersonic aircraft. Sure, you can use them to shoot down large planes, such as tankers, and transport aircraft, but that’s hardly stressing thd limits of the weapon.

You have to see the target before you push the launch button. Doubtful that separatist SAM sites had any advance warning from their opponents’ radar units. That gives them a short time window for their visual and/or local radar to spot the plane. It comes over the horizon and disappears all in a span of 5 minutes or less. Not an impossible window, but a limited one.

A military attack aircraft, loitering over the area and relatively slow moving, has a much greater likelihood of being spotted.

Why are you under the impression that those days ever ended?

I guess because the US won the propaganda war back when the USSR fell apart?