Originally published at: San Francisco man gets parking ticket after curb was repainted red while his car was parked | Boing Boing

Yes, if you look at the entire Google Maps image, there are several spots at that intersection that seem to be very grey with a tinge of pink. No signs besides the stop signs and weight limit signs. I suppose the onus is upon the city to have kept up maintenance on those curbs.

The problem with all of these is something I’ve seen with the US healthcare system too: is there a chance they’d win in traffic court or whatever after showing these faded curbs? Maybe. Is it worth the time, effort, and red tape to go through all of that to fight the ticket, vs just paying it and moving on? Maybe not.

We’re going through the same thing with healthcare - we found a single misclaimed item on a bill, and we’ve realized it’s going to take an incredible amount of manual effort and runaround to have it resolved, or we pay the small amount and move on. Obviously this is by design to convince us to just pay it and move on.

Speaking as a resident of France… if you are moving here to get away from bureaucracy, you might want to reconsider your choices. This is the homeland of the petty bureaucrat.

A couple of months ago, it took us a week to get the paperwork to take possession of and drive our new car even though every single Eurocent had been paid, in advance.

And ask me about the winery police inspection.

Nowhere will be any better. just this morning in NYC there was a crew attaching “No Standing Any Time” signs along a stretch of street that has been a parking area since the only cars were Model Ts. And guaranteed tomorrow people will come outside to a long line of ticketed cars. No advance notice. Should be a nice little windfall for the DOT.

Nowhere will be any better. just this morning in NYC there was…

I’m not some radical anti-government fanatic but still, for those wishing to escape petty municipal bureaucracy there are actually options besides S.F., New York, and France. Some places have too little government for my taste, but there’s a whole spectrum of options out there.

So where I am, the paint on the curb means absolutely nothing other than as an extra reminder of the parking rules either based on signs or just as likely based on state and local statutes saying you can’t park within a certain distance of various things (like intersections, curb cuts for driveways, crosswalks, fire hydrants, etc). Is SFO completely different in that the paint is the law?

I suppose the onus is upon the city to have kept up maintenance on those curbs.

You’d think so, but you’d get a very interesting response from a San Francisco bureaucrat (“interesting” in that you’d be pulling your hair out in frustration).

From the city-provided photo, the curb looks like it was once painted white as well as red. It would take a closer look to tell which was more recent.

White would make sense, as there’s a U.S. Mail box that’s almost impossible to see in the tightly cropped Google Street View images. A white curb means you can stop there just long enough to pick up or drop off passengers and/or mail but parking is prohibited.

Painting the curb there red would require some city or county rule or the judgment of a traffic engineer to justify it. I don’t see anything in the California rules that would tip off a driver as to the no-parking designation for that spot. Without a sign or better maintained curb paint, this seems bogus.

You can fight parking tickets in SF. I have successfully gotten a few reversed due to signs being obscured by trees or posted too far from the parking location. I think they will probably get their ticket reversed since the curb paint was VERY faded. If there’s a red curb, and it doesn’t have obvious DPT or SFMTA yellow lettering stenciled on each end, it’s very likely a ‘fake’ red curb, anyway, painted by someone who didn’t want to pay the city for a permitted red zone spot.

I don’t know about Cali, but over here in Michigan there would have to be a Traffic Control Order, fully approved, on file at the police department and the engineering department in order for this paint to be enforceable. But we don’t paint curbs around here, we use signs, because it snows and we use salt on the roads which greatly reduces the life of paint on a curb. Too expensive to maintain compared to, say, a sign.

There are so many weird parking situations in SF that, yes, the curb paint is the ‘law’. There are plenty of places with red, white, green, yellow, and blue curbs, sometimes only for short distances (such as near driveways or blind corners) that don’t have signs that you just need to go by the curb color. HOWEVER, if it doesn’t have SFMTA or DPT stenciled on each end, it’s likely a fake curb. 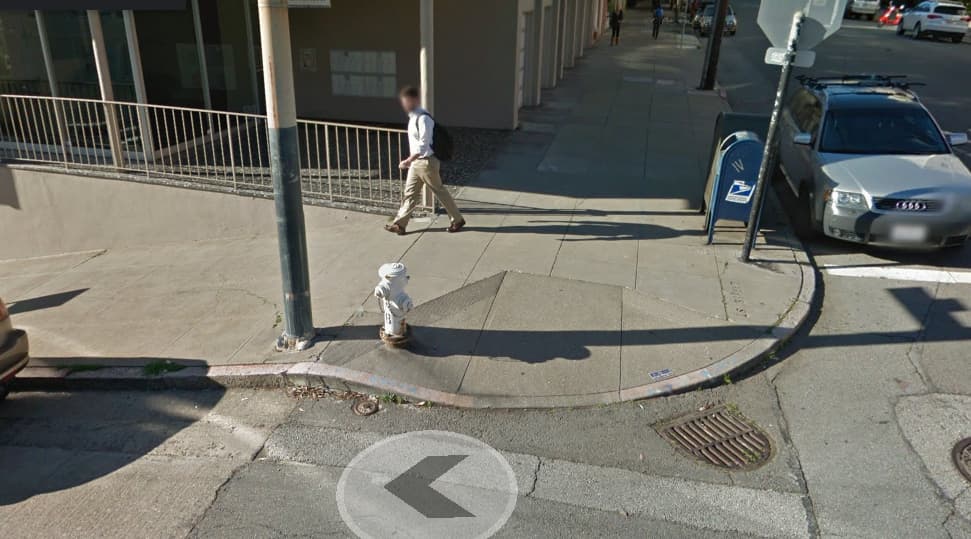 image971×539 64.7 KB
but the June 2014 photo shows that they came out and JUST painted the area around the fire hydrant side of the crossing ramp (note that in SF, fire hydrants tend to get only a few feet of red zone parking clearance around them, not 15 feet). 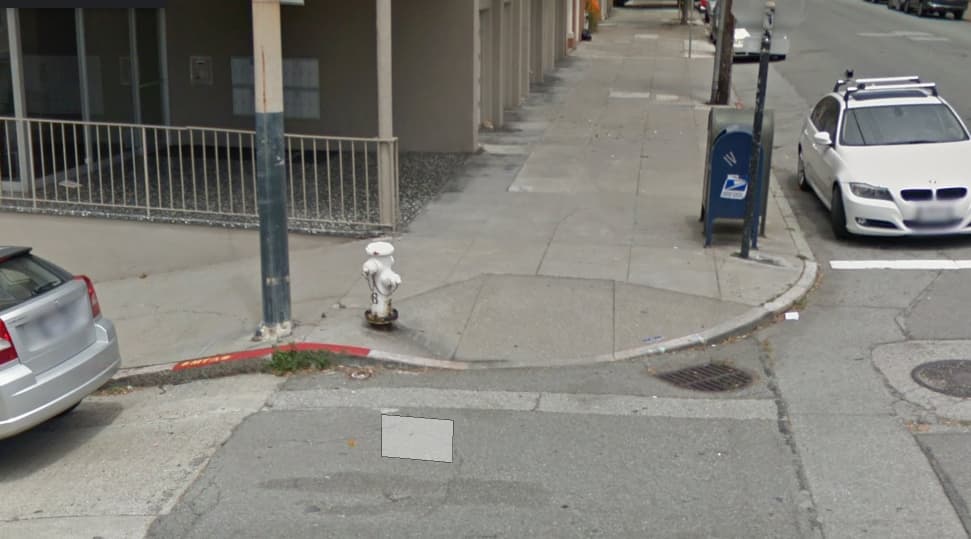 I got a ticket for a red zone that didn’t exist when I had parked there a few hours earlier, once many years ago. I worked at a college and parked daily next to a new building on campus that we worked in, but was partly still under construction. One afternoon I came out and not only had the curb been painted red, but I had been given a ticket,

The craziest part was that where my bumper was hanging over the curb, they couldn’t paint the curb, and they painted part of my bumper!

They waived the ticket.

Anyone remember the old Warner Bros cartoon where a woman parks and goes into the hair salon? While she is in the workers come and install a parking meter. When she comes out a cop is writing a ticket and when she complains the cop says something like, “Oh sure lady, they just put this meter in when you were in the salon …”

That’s what I remember anyway …

I’ve had this experience in SF when I lived there. The curb in this story was always red, but hadn’t been painted in decades so all that was left were tiny specs of red. I’ve had tickets like this and learned to look very closely at the curb if there’s any chance it was supposed to be red, based on proximity to corners, hydrants, etc. if it’s mostly gray you probably won’t get a ticket because the parking officer won’t notice either, but it’s a gamble. That the city has a secret map of what is supposed to be red is not surprising.

There will always be a car there if it looks gray, so they can’t help but paint it while occupied, then the next parking officer will see the fresh red and write the ticket. None of this is very fair, but it’s clear how it happens when the city doesn’t keep up with curb painting (which they definitely don’t).

You also encounter plenty of curbs with old traces of two or three different colours on them, which is even worse. Is this red now, or was it red and now it’s white so it’s okay? Which paint is newer and will the parking officer make the same guess on that point? How badly do I need this space?

My 2c here: vigorous enforcement of parking rules in a city is good because drivers will run roughshod over the rules if they believe they can get away with it. Cars ruin cities, we should disincentivize their use.

The situation in my home (NYC) is honestly out of control, especially in terms of cars perma-parked in bike lanes, blocking daylighting at intersections, not moving for street cleaning 'cause it’s cheaper to get dinged for a ticket for it maybe 2x/month that to pay for a garage spot, etc., etc. Look up the “stipulated fines program” for a particularly egregious dark pattern here. Or the nimbyesque neighborhood cranks who will show up in droves to community board meetings about streets projects that will dramatically improve street safety for all users at the cost of some curbside car storage on public land. “But mah parking spots!!”

The motivation for doing vigorous parking enforcement shouldn’t be to generate revenue for the city, though, that misaligns incentives. It should be to promote street safety and neighborhood livability.

Of course the story in the post is extreme and that ticket should be thrown out, but making out parking enforcement to be Literally Worse Than Hitler doesn’t help matters either.

Of course the story in the post is extreme and that ticket should be thrown out, but making out parking enforcement to be Literally Worse Than Hitler doesn’t help matters either.

I’m pretty certain that nobody on this thread is comparing parking enforcement (especially fair, consistent parking enforcement) to Hitler other than you, or suggesting that people should be able to park wherever they want. But as with all laws, the rules should be clear and fair. Someone who is actively trying to follow the law shouldn’t have to go through life worrying about accidentally missing some minute, ancient remnants of paint on a curb, or other similar B.S.

In its never-ending quest to come up with new ways to take money from drivers, the SFMTA is trying a new tactic…

Though being a bit contrarian here, if that even were how SFMTA conceived of its mission, I would kinda be enthused about it? Up to a point.