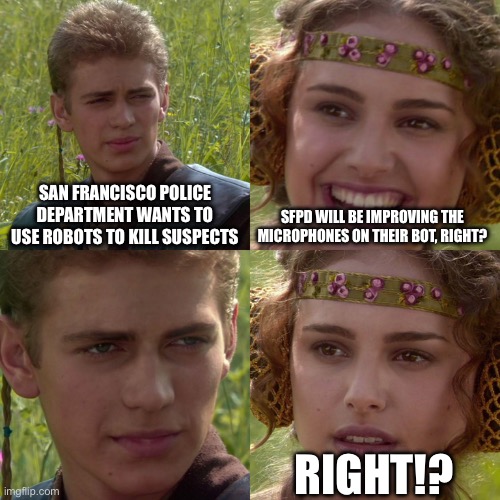 we treat the output as unimpeachable truth anyways

Literally garbage in garbage out given the history of law enforcement.

It makes me want to scream

…attempted to limit the SFPD’s authority…

Oh, how quaint… someone who thinks the cops answer to anybody.

…the police struck out his suggestion with a thick red line.

“Fuck you! We do whatever we want.”

It was replaced by language that codifies the department’s authority to use lethal force via robots:

“Robots will only be used as a deadly force option when risk of loss of life to members of the public or officers are imminent and outweigh any other force option available to SFPD.”

‘Last resorts’ have a strange habit of becoming ‘option of choice’ in the hands of cops.
Why have all those neat toys if you can’t use them?

Other items in the linked report the cops marked out:

Re: the use of the department’s MRAP

Each deployment/use shall be logged with all deployment details and
reported to the Assistant Chief of Operations or designee to fulfill annual
reporting requirements.
Battering ram on the BearCat may be used during a search/arrest warrant
service after the prior approval of a magistrate.

Re: the use of various breaching tools and/or explosives
Each deployment/use shall be logged with all deployment details and
reported to the Assistant Chief of Operations or designee to fulfill annual
reporting requirements.

Literally garbage in garbage out given the history of law enforcement.

It’s just so weird how they’re trying to whitewash the results with algorithms, though - there’s an acknowledgement that the existing system was seriously prejudiced, and the new system is entirely trained on the existing one, but somehow it’ll magically be different. Though I suppose, for those making these decisions, different outcomes don’t really come into it - the appeal of the algorithm is you can keep doing things the same way, but there’s zero accountability.

“Target aquisition was still suboptimal so we fed the algorithm video of Gerorge Zimmerman and Kyle Rittenhouse in action and target solution coalesced.”

… teaching the robots to lie about what they did

“I was afraid for my processors.”

How about the robot can deliver non-lethal somethings. If it’s close enough to drop a grenade or fire a shotgun, it should be close enough spew a super fine net to entangle the perp. Or knock out gas. Less strong than the Russians used in a theatre hostage situation. Or just a stun grenade.

But absolutely no to lethal force.

Which reminds me… I recently went down a Youtube rabbit hole of animals being chased by mostly police, often in cars. Started with llamas, ended with a very recent ostrich incident. A pretty good rabbit hole indeed.

It lead to wonder why police cars don’t carry a net-spewing gun. Seems like a very useful non-lethal tool, both for animals and humans. In the ostrich one, a dude grabbed one by the neck from a moving truck. That can’t be good for the ostrich.

In theory “non-lethal” measures like pepper spray and tasers and batons are only supposed to be used in cases where lethal force would otherwise be necessary.

In practice cops regularly use such weapons (which are more accurately described as “less likely to be lethal”) as tools of compliance or just plain sadism. We don’t need to give police more ways to brutalize people.

Even when “less lethal” rounds are clearly marked in large letters that they are meant to be fired at the ground in front of the target, police go for head shots.

Basically, if they were paramedics and given defibrillators, they would shock patients on the face and groin.

Fueled by the corpses of dead homeless people.

Not being autonomous the robot could not be blamed for the shooting. The Officer behind the console should be held responsible, I agree.

How about the robot can deliver non-lethal somethings. If it’s close enough to drop a grenade or fire a shotgun, it should be close enough spew a super fine net to entangle the perp. Or knock out gas. Less strong than the Russians used in a theatre hostage situation. Or just a stun grenade.

Zorg : It’s light. Handle’s adjustable for easy carrying, good for righties and lefties. Breaks down into four parts, undetectable by x-ray, ideal for quick, discreet interventions. A word on firepower. Titanium recharger, three thousand round clip with bursts of three to three hundred, and with the Replay button - another Zorg invention - it’s even easier. And to finish the job, all the Zorg oldies but goldies: Rocket launcher, arrow launcher with explosive, poisonous gas heads (very practical), our famous net launcher, the always-efficient flamethrower (my favorite), and for the grand finale, the all-new Ice Cube™ System.

He who moves the joystick that aims the gun and pushes the button that pulls the trigger is the person who killed the suspect.

the device in the photo acts as defensive “air-gap armour” for the police operator.

The military ones have software that steadies the weapon and helps aim. There will probably be “upgrades” that help with targeting and target selection. Even without that, it makes it robotic, and amplifies the moral hazard of putting it in the hands of police. They already claim that their firearms “accidentally discharge” when they murder people and they know it’s bad. With this, it will be “the robot did it!”

But, is a machine gun a robot?

I talking net guns. Hard to get less lethal. But cops are gonna cop. Some will find a way to make Nerf guns oppressive.

I probably over-estimate how well these net guns work. Otherwise they seem ideal.

Indeed. But just the net shooter. And maybe the ice thing at the end, but just cold enough to chill the perp, not freeze them.