The people who go out shopping on Thanksgiving day, and trample their fellow humans to death, to save a few bucks, won’t get it.

Many of us do get it. Thanks for the reminder.

I’m not in the best mindset this evening, so those allergic to killjoy sentiment ought to skip reading me.

In my college years, I delivered pizza to make ends meet. Every so often (at least a couple of times a week), we got an order that was unfailingly the same: two large thick-crust pizzas, one of them with absolutely every topping we sold (including anchovies) and extra cheese, the other with ham and pineapple with extra ham and pineapple and cheese. The Pizza Hut I worked at used a conveyor oven, and we had to run both pizzas through the oven about 1.6 times, just to ensure the centers of these pizzas weren’t undercooked, since they were so overloaded with toppings.

The gentleman who ordered these pizzas lived in a single-wide trailer in one of the rattier trailer parks. As far as I could ever tell, he lived alone. When I’d knock, he’d holler for me to come in, then ask that I bring the pizzas into his bedroom. He appeared to be nearly bedridden, though there was evidence that he was still at least partly ambulatory. He lived in utter, foul-smelling squalor, and the guy was six hundred pounds if he weighed an ounce. Probably more. He was unfailingly polite, though not particularly gregarious, and his tips were modest but respectable.

At some point, I realized he hadn’t ordered in a while. The way I realized it was kinda weirdly anticlimactic. When he’d order, most of the drivers would bitch about having to go to his house since it smelled so bad, and his tips weren’t big enough to make the trip worthwhile to them. A couple of us didn’t really mind, but some of us would flat-out refuse to serve him, or at least try to cajole some other driver to take the delivery. And one day I came to realize that we hadn’t had occasion to have that particular argument in a couple of months.

Sometimes I’d think of the guy, and the way his trailer looked and smelled. The familiar wood paneling and brown shag carpeting, so like that at my friend Lenny’s trailer only with slightly more cat pee and (I think) considerably less cigarette smoke. The narrow doorways, just like my own trailer had. I remembered that I’d gotten out of the trailer park before my tenth birthday, but I was pretty sure that the pizza customer probably never did.

I can’t laugh or smile at situations like that. I can’t make the judgment whether gross overindulgence or cruel genetic biology is to blame, and I’m pretty sure that my pity wouldn’t be any more welcome than mockery, but I can’t help feeling that “holiday excess” can result in something indistinguishable from blameless day-to-day living with something as simple as hormone imbalance or god-knows-what medical cause.

I am reminded of Jethro Tull’s “A Christmas Song,” and how its stern finger-wagging against thoughtless holiday indulgence in the face of poverty and injustice seemed a… well, like the sort of judgment that the young and passionate make when they’re still young and passionate.

“How can you smile, when the reasons for smiling are wrong?” asks Ian Anderson. He’s always had me on a fence ever since the first time I heard that song. Part of me sides with him, wanting to never give up the fight against injustice and poverty and want, and wanting to shake the comfortably well-to-do away from their self-satisfied good cheer. But part of me always felt that “the reasons for smiling” may not always be obvious, and likewise their rightness or wrongness may not always be obvious. Mirth at the expense of others may not always be right (I’m certainly in no place to claim it’s always wrong, since I’m as guilty of it as anyone), but mirth for its own sake, even when so much in life is awful and just plain wrong… I think, on the whole, smiling is better than not smiling.

The message of this photo-op may work for plenty of people, without necessarily being at the expense of the morbidly obese. We carry our own baggage to judgments like that. And yeah, there’s certainly a strong argument to be made against holiday excess, or excess in general.

But Santa the Hutt reminds me uncomfortably of the late pizza customer, and though it shouldn’t necessarily mean anything to any of you or even the customer himself (were he alive to read this), it makes me sad.

I just wanted to get that out there. Carry on.

You ought to be a contributor to This American Life, or Snap Judgement. Or record this for Story Corps. It’s a compelling story and I’m liking your analysis, and you told it skillfully.
That is all, I just can’t pass up the opportunity to compliment a debbie downer on their talent for storytelling, even if the story itself is depressing.

[quote=“Donald_Petersen, post:4, topic:15464”]
but I can’t help feeling that “holiday excess” can result in something indistinguishable from blameless day-to-day living with something as simple as hormone imbalance or god-knows-what medical cause.
[/quote] Overeating can also result from psychological addition. Quite simply, using food to fill an emotional deficit. Although I’m an athlete and a bit of a health freak, I have no patience for people who’s main response to obesity is holier-than-thou finger wagging. They’re arguably worse than those who outright make fun of the obese, as they give cover to by legitimizing the people who do. They aren’t interested in improving the situation; they’re just addicted to feeling self-righteous, no different from religious puritans. If they think it through at all, the last thing they want is to constructively address the obesity epidemic (and there is one, make no mistake). Fixing the problem would take away their chew toys.

The same thing goes for Righteous Crusaders Against Joy and Happiness. If they can’t imagine any other cause for joy than smug self-satisfaction, that says far more about them than those they get a kick out of spitting on. I’m not a particularly jolly person myself, both because the world is frequently depressing and because I deal with clinical depression, but I do try not to make company for my misery. I don’t always succeed, but I regard it as a failing when I spend time and energy tearing down other people. Frowns don’t feed the world and even I’m not quite sufficiently self-serving to pretend that they do.

blameless day-to-day living with something as simple as hormone imbalance or god-knows-what medical cause.

While these afflictions do exist, there actually aren’t many sufferers. The conditions you describe are exceedingly rare. By far the most common cause of severe obesity is mental disease. US holiday season = mental disease is what this art says to me, and not in a pretty or easily forgettable way. Honest and difficult, even hurtful, to look at? That really is some good art right there.

I had similar mixed feelings upon viewing this image, although not tied to a specific individual or story. On balance, I don’t think that the intent of those responsible was to be cruel or thoughtless. I can see how it could be seen/felt that way, but I’m also not interested in rejecting every attempt at humor or thought-provocation that could conceivably offend, either. That would mean we pretty much couldn’t laugh (or sneer) at anything.

Just my muddled two cents. Regardless, I enjoy your thoughtful, long-form contributions to these comments.

reminds me of this one we saw in Santa Monica a few years back…life size! 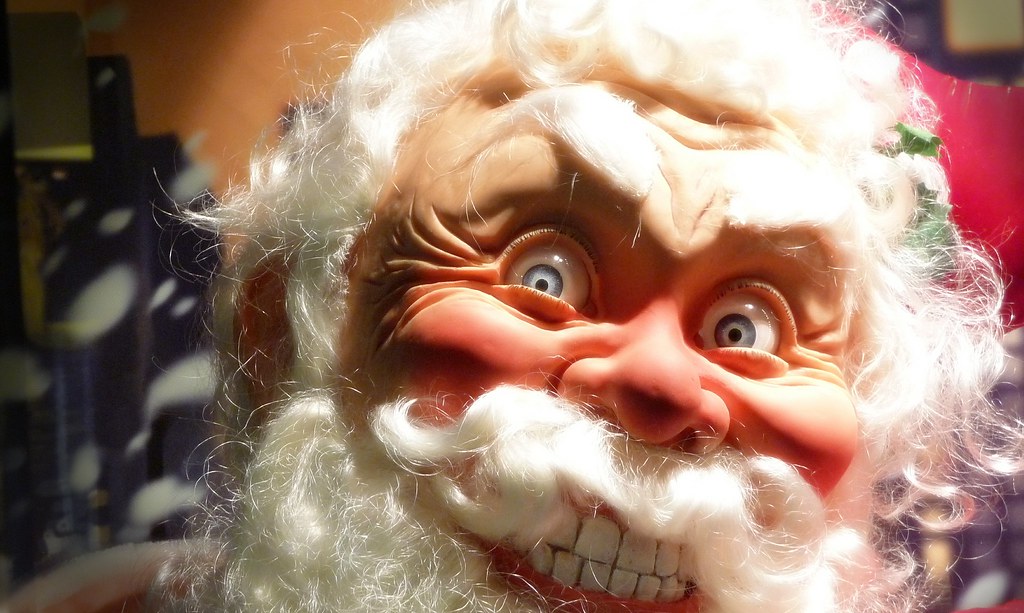 By far the most common cause of severe obesity is mental disease.

anta the Hutt reminds me uncomfortably of the late pizza customer, and though it shouldn’t necessarily mean anything to any of you or even the customer himself (were he alive to read this), it makes me sad.

Thank you for this. The story, and the display, make me sad too.

But, but… It just feels sooo great to feel superior to those less fortunate then you. Makes you feel like your empty life is somehow worthwhile and meaningful.

The message of this photo-op may work for plenty of people, without necessarily being at the expense of the morbidly obese. We carry our own baggage to judgments like that.

It works a treat for me; to my mind it’s a patently obvious metaphor for the ugly truth behind the fairy-tales we’re told about the inherent virtue of commerce and so on.

You know, the holiday season is widely regarded as a good boost for the economy, mountain of resulting trash notwithstanding. That stupid arsehole ‘economy’ that for some reason needs to keep growing until it’s devoured the world.

With a better than 1 in 700,000 chance, you are not big boned, it is not your hormones, it is not genetics, and it not because of the pills. You are not burning off the calories you are eating, and so are developing body fat.

I think that you very, very fucking much need a citation for some reason - and I’m going to let you come up with your own. Feel free, completely own me = something/everything that TCL said is untrue, and I can prove it, here are the studies or cases or citations. Go ahead, destroy me.

In the meantime, mental disease / disorder accounts for nearly all of the severely obese. It’s no less tragic, or painful, or pitiable than a genetic disorder - and it may well be more treatable.

+1 anyone arguing with the laws of thermodynamics is who should be providing citations.

But IMO the thread would best be served by picking up my metaphoric interpretation, and leaving literal obesity out of it… I can see the 150 comments I CBFed reading already.

You guys are mean. I think he’s cute.

Totally cute! The walmart violence, the US obesity / diabetes problem, the consumeristic approach to expressing love and affection… it all just makes me want to tickle Santa the Hutt under his folds where he hasn’t been able to reach for years.

Wonkee chee sa kreespa Greedo? I was gonna do that myself.

You had me at

I’m not in the best mindset this evening, so those allergic to killjoy sentiment ought to skip reading me.