Saying "thank you" will improve your marriage

I’m a fan of academia and all, but did there really need to be a study? I mean, isn’t it common sense?

I suspect it may improve other relationships as well, but can’t figure out how to construct a double-blind experiment.

So will saying “Hotchie Mama!”

Trust me on this.

I’m a fan of academia and all, but did there really need to be a study? I mean, isn’t it common sense?

The UGA College of Family and Consumer Sciences researchers would like to say thank you to the grant committee for letting them prove that treating other people with gratitude and common courtesy will grease the social gears.

I find it works particularly well with kids - of course it’s good for their self esteem if you tell them that they’re important to you anyway, but my kids love feeling that they are making a positive difference in our lives through specific actions, and that we are grateful to them for that. It also makes them try to find other ways to be helpful, which is good for us too.

But “the sun turns around the earth” is also common sense (just observe a sunrise). I think it’s not unimportant (and often thrilling [the common sense was incorrect!]) to use the scientific method on well-known “are you stupid to question this?!?” facts.

I would hazard a guess that this technique could be helpful in a wide variety of relationships.

To the funding applications!!!

OK, fine. I guess this’ll pave the way for the funding on my “Do bears poop in the woods?” scientific investigation thingie.

If you find a sponsor, sure, why not?

I like this paper about Chinstrap and Adelie penguin defaecation pressure. 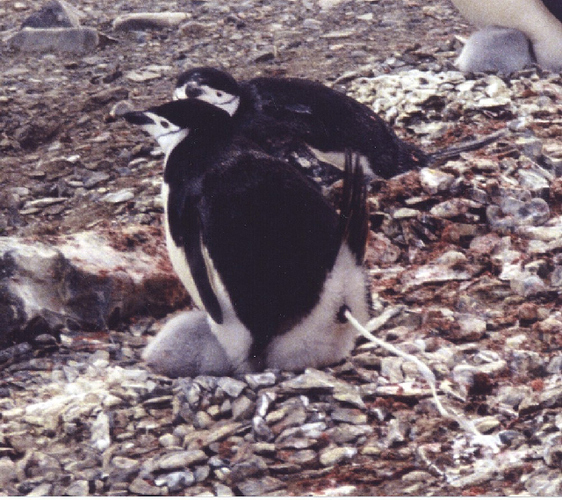 Couples who show gratitude are happier. So that means that if inject gratitude into a marriage it will become happier, right?

Speaking from experience, one-sided gratitude gets old. A relationship will become happier if BOTH (all) people in the relationship are courteous to each other.

What I meant to imply was that it’s almost certainly the case that people who are happier with a situation display more gratitude. There is plenty of reason to think the causation doesn’t run the way they suggest.

Hear, here. One-sidedness in any mature relationship, not just marriage, is incredibly draining and taxing. I said mature because this doesn’t include the necessity of non-reciprocity when caring for children and I’d go so far as to say also if you are the primary caregiver for other reasons.

As far as two adults relating to each other, if it’s just this lopsided give give give until you are dry, that’s not healthy. There has to be more than gratitude; it needs some form of reciprocity and share-and-share alike working together for the common good going on, or it’s awful.

The spirit of the OP is noted, however. No situation is perfect. Or if it is perfect, it won’t be for long. There will eventually be an upset. How do you roll with it?

One-sidedness in any mature relationship, not just marriage, is incredibly draining and taxing. I said mature because this doesn’t include the necessity of non-reciprocity when caring for children and I’d go so far as to say also if you are the primary caregiver for other reasons.

I think it’s important to acknowledge that it’s still incredibly draining and taxing even if the imbalance is there due to children or elderly or medically challenged. In some ways worse, because you KNOW you’re supposed to be understanding, but really, would it kill them to say “thank you” every once and a while?

(I might have had a particular child in mind as I typed that!)

I can imagine it working both ways. You can train yourself to show more gratitude in the same way you might train yourself to notice other things that normally blend into the background. You’re basically using a form of CBT on yourself - focusing on positive everyday things that you don’t normally notice rather than the negatives that normally take up a lot of your mental energy and can disproportionately affect your view of another person. Of course as @chgoliz points out, this does require commitment from both sides. However, it is a powerful way to deal with your own problems with ingratitude and make the other person’s life easier.

To be honest I think that most of the time behaviours and feelings are linked with causation flowing both ways. Apparently smiling makes you feel happy and all that. Of course one day when I was really angry about something I decided to smile to see if it would, in fact, make me feel happy and instead it made me feel my pulse in my temple. Behaviour can shift emotion and emotion can shift behaviour, but neither can just bulldoze over the other.

I don’t doubt that for most couples who don’t already do it regularly, trying to be mindful of thanking the other is a good idea that will probably improve feelings between the two. I just wanted to complain about an apparently confusion between correlation and causation because I’m mean spirited and inclined to react negatively to anything that says it could improve my life. Also, I hate the entire concept of gratitude. Phooey!