Reminds me of the Soča in the Julian Alps … 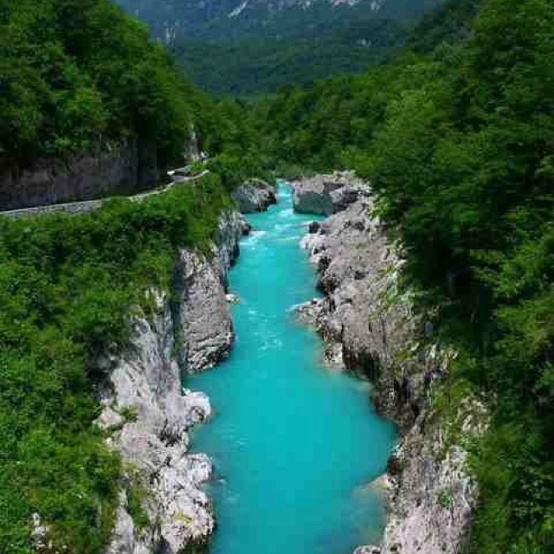 That’s cause mountain rivers are usually sourced from a glacier, which grinds rock into flour, giving rivers this colour. The river in my city is this colour all the time. I’d assume the river in Costa Rica doesn’t come from a glacier which makes its colour more unusual.

So… Not the Lost Homeland of the Ty-d-bol People. 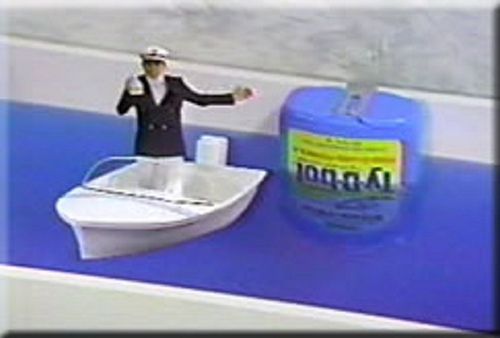 See, I was wondering about that. The last line of the OddityCentral article is “Interestingly, the Rio Celeste phenomenon is unique in the world.” My immediate reaction was “Oh I seriously doubt that”.

What does “phenomenon” mean? How specific does it have to be for this to be a unique case?

Mie scattering due to suspended particles that produce a colour? Well, no, obviously that’s not unique.

Mie scattering due to aluminosilicate particles of most commonly 566 nm in size leading to a turquoise rather than a teal in a river at the confluence of two colourless streams in a national park? Sure. Maybe that’s unique.

I once spent a week at a Goethe-Institut in the town of Blaubeuren, near Ulm; there lies the Blautopf, source of the River Blau: 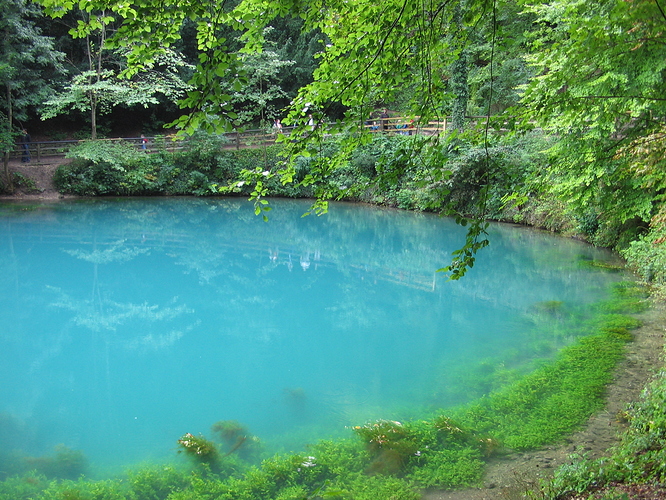 at the confluence of two colourless streams

That would be my guess; perhaps what is unique is that there is a point where you can very clearly see the change and a clear line of precipitate.

I was just there last month, and it certainly appeared that they have known this for a while.

…source of the River Blau

The River Blau sounds like a place people go to let their ennui run free and unfettered for a while. Blau.

That would be my guess; perhaps what is unique is that there is a point where you can very clearly see the change and a clear line of precipitate.

And that’s the part that’s actually really cool. The pH changes when the two waters mix, causing the equilibrium for the precipitation of the aluminosilicate particles to shift, leading to an increase in particle size, which gets you the scattering.

Did you taste Quebrada Agria, Sour Creek? The paper says it has a pH of 3.1, which is remarkable for a natural body of water.

Did you taste Quebrada Agria, Sour Creek? The paper says it has a pH of 3.1, which is remarkable for a natural body of water.

I did not know about that- and I certainly don’t think I would have the nerve to drink from a stream in an unfamiliar place.

I certainly don’t think I would have the nerve to drink from a stream in an unfamiliar place.

This is probably wise. If somebody had told me it was called “Sour Creek”, I would really have wanted to try it, though.

Río Celeste the water passes some of the Sun’s rays, but reflects the bluish tone group. So the water appears blue to the human eye.

“Appearing blue” is kind of an odd way of putting it, no? As if the river was somehow not actually blue, but just seemed that way.

“Appearing blue” is kind of an odd way of putting it, no? As if the river was somehow not actually blue, but just seemed that way.

Yeah. The whole paragraph from the Costa Rica Star is kind of useless:
“Sunlight contains the entire color spectrum, similar to the way we see them all in a rainbow. In any other river sunlight penetrates to a certain depth and no particular color is deflected or reflected back to the surface, so it looks transparent, while in the Río Celeste the water passes some of the Sun’s rays, but reflects the bluish tone group. So the water appears blue to the human eye.”

That’s a more-or-less decent physical description (it conflates transparent with colourless, which aren’t the same), but it applies to literally anything that is blue due to an absorption or scattering process. It’s worded so vaguely that it could apply to sapphires, the sky, indigo, pure water, Morpho butterfly wings, or cupredoxin proteins, even though all of those things involve distinctly different physical processes.

And yeah, phrases like “the water appears blue to the human eye” and “tricked the human eye into seeing the water turquoise” are misleading. The blue light coming out of the water is more intense than the other colours of light. It’s blue, just like any of those other blue things I mentioned are blue. This isn’t an illusion that relies on faking out your photoreceptors or some perceptual glitch in your brain. That can certainly happen – I can make you perceive turquoise without any turquoise light entering your eye – but that ain’t what’s happening here. The river appears bright blue because it’s actually bright blue.

No, “appearing blue” is exactly right.

It’s the result of a complex interaction between the wavelengths of the illuminating source, the reflectance/refraction/absorption characteristics of the illuminated object, the abilities and limitations of the human visual sensory system, and the sometimes-rather-fanciful peculiarities of human color perception.

“The water appears blue” is actually a better, more accurate description that “the water is blue.” The picture doesn’t do credit to the lake, it has a most unusual shape of blue.

Correct, the perceived colour is not. But objects do have inherent, objective properties that affect how light with wavelengths between 400 and 800 nm interacts with them. And I can quite easily define the colour of an object exclusively in terms of those properties, without perception of any kind being required.

What is colour? Is it an objective property of an object? A measurable property of the light that travels from the object to your eye? A biochemical process involving the photoreceptor proteins in your retina? Or is it merely a sensation in your mind?

You have dismissed out of hand any possibility that the first of these definitions can be useful. But objects do have objective and inherent physical properties, including one that involves the interaction of light and matter to produce reflected light with different relative intensities of different wavelengths. We have a name for that property. It’s called colour. And it’s an inherent characteristic property of an object.

The apple’s still red, though. Because we can define red as “the red light is more intense than the other light”, and in that definition the colour of the apple is just about the apple, and has nothing to do with a human retina or a human mind.

“The water is blue” is a true statement, whether or not you’re perceiving it to be so. “The water appears blue” is also true, but that second statement involves a very different process, and its truth is not a necessary condition for the first. Kalamalka Lake (a.k.a. "Kal Lake") is a large lake in the Interior Plateau of southern central British Columbia, Canada, east of Okanagan Lake and approximately 4 kilometres (2.5 mi) south of Vernon. The lake is named for the Okanagan (Okanogan U.S. spelling) Indian chief who occupied its northern shores. At different times of the year the colour of the lake can range from cyan to indigo, in different spots at the same time, earning the lake the moniker "lake of a thousand colors". The colour of ...

That excerpt is a tautology, doesn’t really explain the physics/chemistry behind the river reflecting/refracting blue light

Sure, “photons of a certain range of wavelengths are the only things that are actually blue” is a valid perspective if you are doing physics or something similar. However, that’s a pretty atypical usage - most people mean something (possibly vague) about what an object looks like under normal lighting. i.e. A thing is blue if it emits enough blue photons and few enough photons of other wavelengths in normal lighting conditions for a typical human eye to register it as blue.

“Appearing blue” makes it sound like it’s fooling you somehow and not really emitting any blue photons. Like this thing: 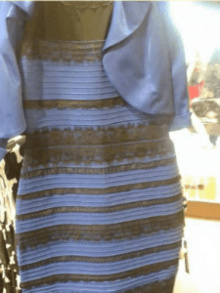 Or maybe the dress actually is blue, I forget. Anyway, as far as I can tell, the river doesn’t seem to be fooling us.