Yup. We went to war to rid the world of Nazis. Were going to nuke them.
MAGAts will go away when Trump strokes out or is in prison within 1-2 years.

First they came for the Nazis…
…and then we partied like it was 1999, because punching Nazis is a canonically moral and ethical good!

Your opinion runs counter to the 1st amendment of the US Constitution. An American does have the right to espouse whatever ideas he has, and assaulting him for it is illegal.

“Why the fuck are you a volunteer Nazi safety advocate?”
—Aamer Rahman

I’m familiar with the ideology. I’ve been to Auschwitz, and I had relatives die there. My point is, you don’t get to decide what’s punchable and what’s not.

“Why the fuck are you a volunteer Nazi safety advocate?”
—Aamer Rahman

(Also: pretty sure that is exactly what I get to decide. You don’t get to decide what everyone else decides.)

MAGA hats represent separating families, the sexual abuse of stolen children and god knows what other crimes we will uncover.

The Nazi Armband? Attempted genocide of roma and jews, plus some INTENSE badness to homosexuals and mentally disabled folk.

They are coming together, however. Red hats, brownshirts, confederate flags and the swastika.

We’ll tear ourselves apart instead while the Kremlin rubs its hands with glee.

This is precisely what white supremacists WANT TO DO AND ARE ACTIVELY DOING. You do realize that they regularly threaten, attack, and kill people, right, and that they’ve done so for a long time, that they are responsible for more acts of terror than other groups?

you don’t get to decide what’s punchable and what’s not.

So, then, even if you’re being attacked, you shouldn’t punch someone? Ever?

So American authoritarianism is acceptable

This is punching authoritarians.

I see a repost is needed: 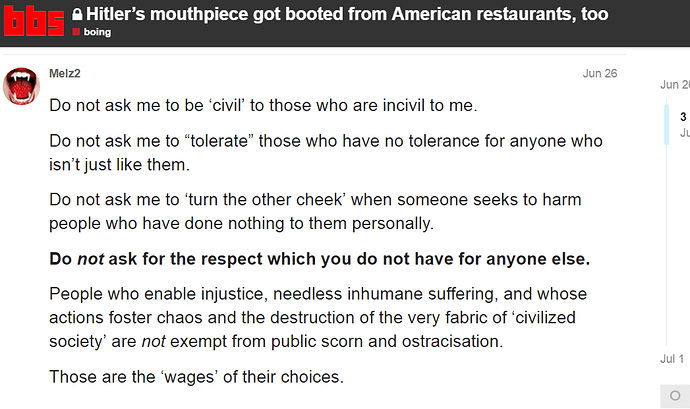 So is this the thread where it’s ok to resort to violence because you don’t like what someone said? It’s hard to keep up these days.

Why don’t you respond directly to the person who published the article first? He’s always ready to hear expressions of disappointment in BoingBoing.

Their ideas should be heard

Would you also ask us to hear the ideas of flat-earthers? If you want to waste your time listening to thoroughly discredited ideas head over to Stormfront. Per Karl Popper we’re under no obligation to tolerate intolerance, especially that couched in the language of violence (I look forward to your telling us about all those peaceful Nazis).

“Oh, won’t someone PLEASE think of the nazis!”

that armband. Did he do it to piss off Joey?

My patience has ended for listening to people with ideas incompatible with a tolerant society. I really have no ethical problems with the casting out of people that refuse to participate in a constructive, cooperative coexistence with their fellow human. They are free to reevaluate their irresponsible position and rejoin society.

Given that we’re actually arguing over whether or not it’s okay to punch someone who is actively wearing a symbol of Nazi ideology, it seems pretty clear to me that all the hand-wringing over whether Richard Spencer should be punched because he’s not technically a Nazi was never about being worried that non-Nazis will start getting punched too.

The first amendment only says that the government can’t punish you for what you say.

So is this the thread where it’s ok to resort to violence because you don’t like what someone said?

If you had a chance to punch this guy in the face, would you?

The First Amendment prevents the government from abridging free speech. It says nothing about preventing individuals from doing so.

Shall we move on to 8th grade civics lessons now?

If you read what people are actually writing you’ll see that what people find unacceptable is not just authoritarianism, but “eliminationism”. Nazis want to kill many of us (and have killed many already).

Re-posting this in case anybody is in the DCNoVaMd area this weekend.

Mass Mobilization Against The Alt-Right in Washington D.C., August 10-12

We are calling all anti-fascists and people of good conscience to participate in international days of action August 10 through August 12 and a mass mobilization in Washington D.C. This is for Heather Heyer, Corey Long, Deandre Harris, I.C.E....

Fair enough. But surely you’ll agree in a more sober moment, that if it were so very plain that we wouldn’t have the ACLU (I’m a member!). For instance, if the local Seattle PD decided not to arrest the puncher, one could make that case that the government is abridging the Nazi’s free speech. No?

True but generally only the government has the right to use force to respond to bad behavior, short of self defense, so practically people are prevented.

Does anybody here read lips? I would love to know what that guy is actually saying.