See the breathtaking drama of the Arizona Monsoon

(Edit)
He says on the day he gets dumped on for an hour, including pea hail. Still, needed more of this, and earlier. 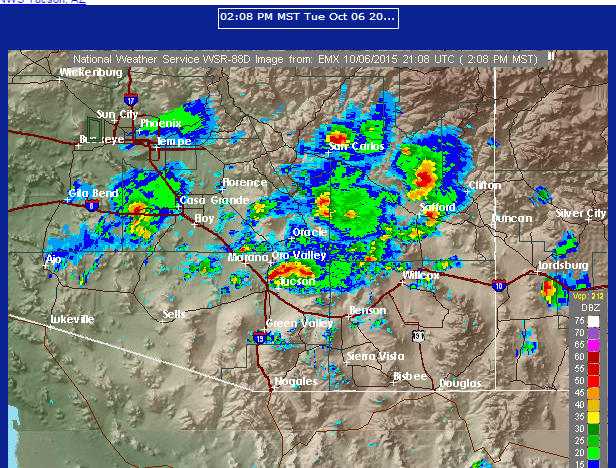 I don’t know, it was pretty good. I think Tucson came out just above average. It seemed better than the past couple of years.

I’ve heard that the actual rainfall was “average”, which is considered good during an extended (century?) drought such as we are having. Actually, my main beef is that every storm that rolls into town seems to split in half and go to the east and west of midtown before reuniting against the Catalinas…and our house seems to be the absolute middle of every gap.

I live in North Phoenix, and I think we got 4 storms all summer, which is rather sad, especially since two of them dropped a “trace” of rain. My father does placer prospecting in the Bradshaws, and there hasn’t been any water in the creeks up there this year. In the last years he even made a living doing mining services up there, but this year he needed a second job due to the utter lack of water I’d say the monster drought is still in effect.

I keep telling my girlfriend, and other people who didn’t live through the 80’s here about what a monsoon used to be like. They used be be truly scary, but now we call anything with a hint of moisture a “monsoon”. Kids these days, get off my meteorological lawn.

I think even without climate change we could be drifting into the kind of weather cycle that wiped out the Anasazi. The difference, of course, being that the Anasazi didn’t have two million+ cities while growing cotton (! how the fuck is that even legal?).

The difference, of course, being that the Anasazi didn’t have two million+ cities while growing cotton (! how the fuck is that even legal?).

Every time they start talking about water saving, cotton is the first thing that I think of. I need to take a faster shower, so one of the world’s most water hungry crops can be happy?

Everyday for 3 months, I find myself wondering why the hell we decided that sticking a massive city in the desert was a good idea. I barely supported the indigenous population, who were largely more clever than us (designing their structures for their environment and all), and were less populous by a significant amount.

One of the things that happened was that when the white people moved here it happened to be a particularly wet period in Arizona’s history. The native people had cultural knowledge that things could be very different, but the missions and rancheros didn’t understand this. Then we figured out drilling into the aquifer and diverting the Colorado, not imagining that neither of those might be infinite. Within that extremely retarded and primitive world view I can kind of understand what happened next: given enough water Arizona seems like an agricultural paradise.

With the current crop of Douceybags in office, I’m not hopeful that any sensible policies will be enacted anytime soon (such as they are trying to do in CA).

Where AZ could kind of redeem itself is if we can convert a lot of that farmland to solar. But we either need some radical lifestyle and infrastructure changes or a 75%+ cut in population.

I spent most of my childhood and my teen years in Phoenix, and left the first chance I got.

After 35 years gone, the spectacular monsoon-season storms are the only thing I really miss.

And these are some great, great shots that capture not just the lightning and the clouds as most time-lapse does, but also the drenching down-bursts and the blasting gust fronts driving the big sand-wall dust storms, which most shots neglect. The time-lapse rate is just right, too, capturing the storm dynamics clearly.

It also makes me realize, with a momentary sense of startlement, how much a thunderstorm cloud with downburst resembles pyroclastic flow from a volcanic eruption.

Not surprising, really, in that the processes are indeed similar - material is transported upward in a column that becomes insupportable, and then the column collapses, blasting outward at ground level on impact.

One is hot lava and ash lofted by explosive eruption; the other is ■■■■■, saturated air lofted by convection — but the dynamics are startlingly similar.