Sledge Hammer! A hilarious, prescient warning on police violence from the 1980s

I truly truly loved that short-lived series at the time (appointment viewing as a kid), and re-watched the whole lot back to back when I found them on Youtube a year or two ago.
Many of the gems (one-liners and throw-away gags) still shine, even though the 80s pacing now looks a little jaded.
Right up there with Max Headroom. (oops, further derailment ahead) 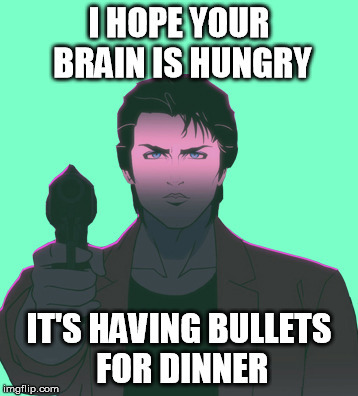 Reminded me of Police Squad / The Naked Gun:

Mayor: Drebin, I don’t want anymore trouble like you had last year on the South Side. Understand? That’s my policy.
Frank: Yes. Well, when I see 5 weirdos dressed in togas stabbing a guy in the middle of the park in full view of 100 people, I shoot the bastards. That’s my policy.
Mayor: That was a Shakespeare-In-The-Park production of “Julius Caesar”, you moron! You killed 5 actors! Good ones.

The creator, Alan Spencer, has a really cool story:

Alan Spencer is an American television writer and producer, known for creating the 1980s satirical police series Sledge Hammer!. He was one of the youngest people ever to join the Writers Guild of America, writing for television at the age of fifteen. He is a "script doctor" for feature films. Spencer, at the age of fourteen, sneaked into Twentieth Century Fox Studios and onto the set of Young Frankenstein to watch his hero Mel Brooks direct. Marty Feldman, who had a fondness for mischief, reco...

Also, Sledge never kills anyone, the closest he comes is when he blows up a building that is supposed to have the sniper in it. I have the DVD version. The network bounced it all over their schedule.

Prescient warning…? Does BB think there was no police violence in the 1980s?

Suddenly I have a hankering to go and watch Superjail.

Sweet unconditional incarceration for all!

Life on the outside ain't what it used to be. The world's gone crazy and it ain't safe on the street. It's a drag I know, But there's only one place to go. I'm coming home Oh yeah I'm coming home.

I thought I was the only one who remembered this show! Too funny, way ahead of its time in some ways, and sad it only lasted two seasons.