Or you can play with a regular deck of cards and some Spoons.

I was really hoping that someone finally figured out a way to make a fun, fast paced family table-top game based on the movie. Violent criminal thugs, jewel thieves, fixed boxing matches, bookies, murders, it’s fun for the whole family! Ages 3 and up only. 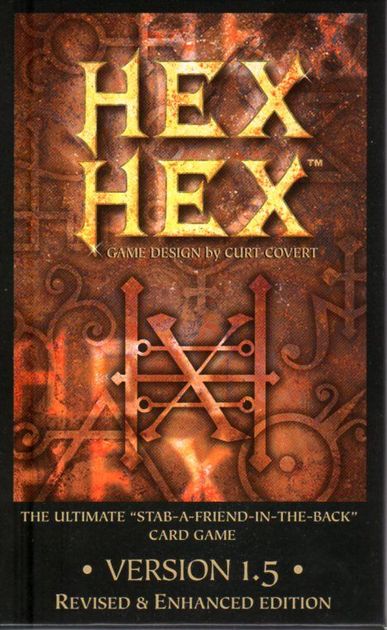 This is a card game that forces a Hex token around the table between players. In this respect, it's sort of a game of Hot Potato. Whoever can't get rid of the Hex token by using his cards "blows up," thus losing points. Naturally, there are...

But yes, Spoons is also quite adequate. (I remember the first time I played Werewolf it was with an ordinary deck of cards rather than a $20 gussied-up version along the lines of Resistance or Avalon. Simple solutions seem to be lost these days.)

Jorpho, you and I are cut from the same clothe, I was about to recommend the exact same game. Though I think you have to get Hex Hex XL to get the stick variant. (I could be wrong, but if you are thinking about getting it, make sure that the sticks (called bones in the game, I believe) are included in the component list). I would add the game can be a little frustrating at times (it tries to do a bit too much for my taste). But the “grab the stick first” mechanic (the newest subcategory of games on BGG) is pretty fun.

Maybe not the same game, but my friend has a contemporarily produced game called “Snatch” that is packaged in a large opaque plastic tube that looks more like paraphernalia than a family friendly game. She’s a board and card game pusher, while I’d almost always prefer to talk and just hang out.

More often than not my greeting to her, upon seeing the offending object protruding from her pack, is “Keep your dirty snatch bong away from me Suzanne! You can’t make me play!”

Found it. Snatch-It, not Snatch.

Too many Snatch Bong hits, I guess.

So its musical chairs except without the chairs or the music?

Or for a more updated version with some different game play try ghost blitz. It has the distinct pleasure of being incredibly fun while also amazingly cute at the same time.