Edward Snowden, the former NSA contractor who leaked details of the US spy agency’s surveillance activities, has agreed to asylum in Venezuela, according to the tweets of a senior Russian politician close to the Kremlin. Earlier today, news agencies reported that Venezuela confirmed the whistleblower’s asylum request. Yesterday, we published a first-person account of one… READ THE REST

You won’t want to miss Democracy Now!'s coverage today about Snowden. They speak to Ecuador’s foreign minister – who is outraged about the revelations of U.S. spying throughout Latin America – and they also talk to Glenn Greenwald, the journalist breaking all the stories being leaked from Snowden. Here’s the link: democracynow.org.

Thanks for the tip!

Since they’ll likely disappear from the front page sometime soon, here are direct links to those stories: Amidst new revelations of U.S. spying in Latin America and ongoing diplomatic tensions over the asylum efforts of Edward Snowden, we are joined by Ecuadorean Foreign Minister Ricardo Patiño. Speaking from Quito, Patiño addresses the confusion over... 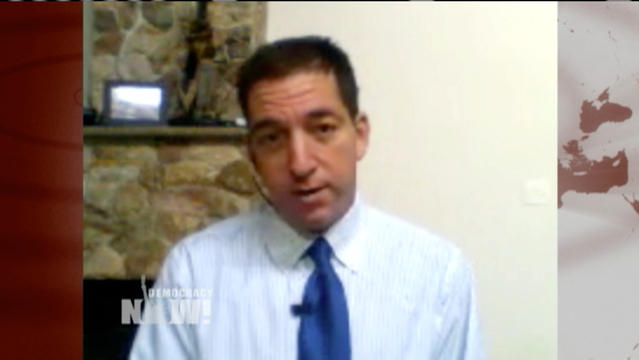 In part two of our interview from Monday, Guardian columnist Glenn Greenwald details his conversation with National Security Agency leaker Edward Snowden over the weekend. Greenwald says he spoke at length with Snowden for the first time since...

Maduro has airplanes at his disposal with enough range? autonomy to make the flight to Moscow, and then back to Venezuela. The only problem is, what route is that hypothetical airplane going to use? If he use La Habana as a stopover, he still have to flight over American territory…

if it is a plane being used specifically to take him to Havana, then it doesn’t have to. While the great circle from Moscow to Havana hugs pretty close to the eastern seaboard of the US, it doesn’t actually cross over US land except for southern Florida, so it shouldn’t be too hard to plot a route over the Bahamas instead to avoid it. Of course most commercial airliners will not be doing this, so I suspect he will want to avoid those.

When flying from London to Seoul and watching the flight map thing, I found it interesting that it was a graceful curve all the way until the Yellow Sea, where the plane turned sharply to the right presumably to avoid flying over the North, so planes can and do perform that kind of manoeuvre.

When dealing with a vast, corrupt military-industrial complex, he should probably escape to Mexico.

Whoops… ¿Did I say Mexico?

Please… corporatist journalists, don’t rush to depart from Moscow, Russia on every first class flight that leaves on July 10th from 3am to 5am to fly to Metlatónoc, Mexico… Don’t do it.

I learned from the Daily Mail yesterday that Mexico is in South America, so that would be very convenient if he needed to go to Venezuela or Ghana.

Technically, Mexico is part of North America (at least for us in South America)…