So, I'm the only person posting to BoingBoing's Google+ Group

No clue, I’ve never Facebooked. I tried G+ as an amusement, but so far as I can tell, the only people I know still using it area family where a few members are Google employees.

Well, yeah, Twitter is basically RSS for non-geeks. And you can follow famous-ish people or friends there without invoking that shitty “friend or not friend” calculus that Facebook demanded.

Not quite the only one but aside from when I don’t feel comfy going to BBS (i.e. while at work) or when I what to share something on BB to family, etc., I don’t have much use for the G+ group.

I wanted to like G+. But then I just got inundated with spam account followers and it became un-fun. So I quit posting anything. The real cutoff was about the point that two bots started to sort of flirt with each other (as best as bots can do) in the thread of one of my posts.

Which is weird because G is so good at preventing spam in GMail. Different teams I guess.

I am curious, as a woman with a relatively high online profile, do you find Twitter… uh, inhospitable? Read quite a few articles like this one recently.

I’ve never really had a problem on Twitter. At least, never a being-a-lady-based problem.

Apparently not… or at least not one that’s in use.

I post stuff there sometimes… I think in general Google+ just doesn’t have lots of people on it, at least in my experience. It is, however, the only “social media” I am on (no FB or the Twitters).

I see updates to it all the time, actually. Whenever I check my google+ account, which is like… a few times a week, I’d guess.

I get the occasional bot posting/friending/whatever-they-call-it-on-google+ to my account, too, but I just ignore them. I’m generally not high profile enough to get two bots to flirt with each other in comments.

You tend to get 10-15 one-sentence comments from different people, with very little in the way of conversation or debate. This is from two days ago: 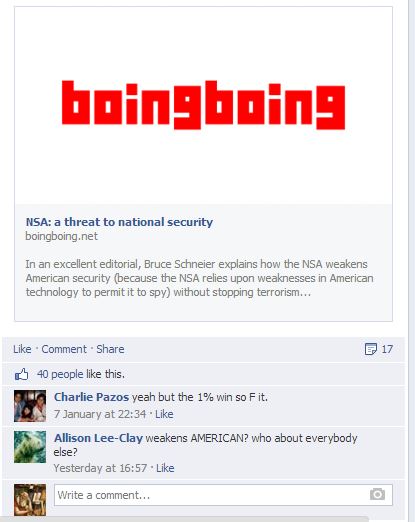 The problem for me is that in order to read the actual article, you have to click through to the BB site. To comment, you either go back to FB or click one more button to get to the BBS here. It really doesn’t save any time and it’s obvious that more people commenting here have actually read the article. If I like an article, I’ll link to it on the main site so that I can share it with my actual friends rather than commenting with people I don’t know.

Google continues to try and cram its users into Google Plus, its also-ran social network. - Cory today.

Between the #nymwars, the google+/youtube fiasco, and other not-so-popular things that google+ has done that have been covered here, it’s not surprising that platform would be antithetical to a good portion of the bb community.

Tho tis valiant of the site to try to solider on to provide the content in the less popular channels that some may favor.

Yeah, it’s just like a web feed, but without the summaries, or the article text, or the original URLs.

It’s sad that people use Twitter so much for something it’s so terrible at. G+ is actually much better for link-sharing than Twitter, and doesn’t have the Facebook “friend” crap. The BB links and pictures all seem to end up on G+, so people who don’t understand web feeds but do understand Twitter’s deficiencies might want to give it a try.

The problem for me is that in order to read the actual article, you have to click through to the BB site.

Sounds like you want the web feed. That’s how I read BB.

That’s what I do use. I’d personally rather keep social networks and feed readers separate. Facebook is useful for following news about friends or articles that get them thinking, but if they have a site for that I’ll just put it on my Feedly account along with BB and cut out the clutter.

I initially joined the Google+ group, but then I removed myself because I did not really want to see all the community posts in my feed. I have not “liked” their page because I already use RSS to see everything that gets posted to the website.

I have liked them on Facebook but since Facebook “helpfully” shows very little of the pages that I have liked, I am not really bothered by the duplication between Facebook and the RSS feed. I really wish there was a way for me to view everything that a particular page posts (besides just going to that page). I tried a RSS feed for a page, but the formatting was pretty bad.

Wow, you guys sure are having a different social media experience than me.

Twitter seems pretty useless to me, unless you are some sort of media personality - if that’s your job or fetish, OK, makes sense, but if you don’t have or want “followers” it’s just a highly limited and redundant tool. I have a blog, y’know, I can post 140 characters any time I want. Or more.

But Google+? Hell, it reminds me of early bOINGbOING. I see things there like a guy that built a 3-d printer that uses metal waste from a bandsaw for feedstock and artificial lightning to sinter it, the rockin’ cyanogenmod community, updates from the School for Bears, Linus Torvalds with amusing rants about bad software, Will Shetterly posting a video of Gomez and Morticia Adams to the tune of Lehrer’s “the Masochism Tango” - etc., etc., etc. it’s just endlessly amusing, and quite deep and rich. Are you sure you guys are doing it right?

I mean, maybe I’m just super mega geeky but I don’t see much wrong with G+ that isn’t wrong with every other “social” platform, and the content is great. Check out the “Makers, hackers, artists & engineers” community for example.